This modern day western might seem an unusual choice to feature amongst the review pages of Kung-fu Kingdom given that it is not a martial arts film per se. Yet at the heart of this kick-ass guilty pleasure from the bygone era of the 80’s are scenes that feature some highly effective martial arts action.

Professional ‘cooler’ Dalton is hired by Frank Tilghman to take over security at his club/bar, the Double Deuce, in Jasper, Missouri. Tilghman plans to invest substantial money into the club to enhance its image as a dive bar, and needs Dalton to deal with the troublemakers to help maintain stability. However Dalton’s efforts catch the attention of corrupt businessman Brad Wesley who fears Dalton’s actions could hamper his interests which he viciously protects. Soon a power struggle ensues leading to a deadly confrontation.

Youre too stupid to have a good time

This time its for real

This henchman gets a nasty kick

Although the martial arts fighting cannot compare on the same level to the likes of Chuck Norris or Jackie Chan, in its own right “Road House” was a fair attempt to bring the excitement of cinematic Kung-Fu fighting to Hollywood 80’s action film without martial arts stars. “Die Hard” stunt co-ordinator Charles Picerni, and uncredited fight trainer/co-ordinator Benny “The Jet” Urquidez worked with and trained the actors resulting in some pretty decent down and dirty fighting with much of the action mainly consisting of messy and destructive bar fights.

The fighting was not intended to look slick, elegant or even athletic as in most contemporary martial arts films. It’s clear to see that sometimes the kicks are not perfectly straight, the punches do not swing out quite as far as you might expect with one or two actors at times losing their balance hence the lack of grace. However, for what it lacks in finesse-fu, it compensates with grittiness and realism and some close quarter fighting that really does pack a wallop.

For example where Dalton is battling henchman O’Connor, after a combination of hits and blocks Swayze throws a left hook to actor Michael Rider who looked so convincingly stunned by the blow that one expected to see a carousel of stars appear above him!

There are plenty of well executed stylish looking martial arts moves such as Dalton’s Hapkido move sending an armed barfly head first into a table and Jimmy Reno battling the Double Deuce bouncers using a pool cue as a Bo staff. Even Sam Elliott gets to show off some impressive skills taking out a seven foot tall bad guy with a bone crunching kick to the knee and hurting bomb punches that look a little too real even! 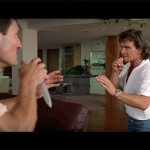 Not in the mood to be messed with

Jimmys side kick packs a punch

Escort this gentleman to the door

Dalton deals with some delivery problems

All the performers do their best, move fast and hit hard making them fun and exciting to watch.  Yet of all the fight scenes the one that stands out is the anticipated matchup between Dalton and Jimmy Reno. Reportedly Marshall Teague and Patrick Swayze pulled no punches so the pained look on the actors’ faces ramped up the realism factor. The choreography is a mix of various martial art styles evident in the variety of locks, throws, kicks and punches as used in Kickboxing, Hapkido and Jujitsu, with a particularly impressive flying kick from Swayze himself. The gruelling work put in by the actors is visible in their strained expressions adding that no-holds-barred street fight feel to a fight scene packed with some excellent technical manoeuvres.

Essentially “Road House” is a man’s film in which everyone talks tough and resolves their differences one way. Even Dalton’s stoic Zen bouncer succumbs to the saddle-up lock and load approach to problem solving.

Yet its simplicity is the film’s charm and “Out for Justice” writer David Lee Henry packs the script with plenty of amusing testosterone laden dialogue that will have you laughing and cringing at the same time, and director Rowdy Herrington keeps it all ticking along at just the right pace.

The action is the film’s strong point even though it does not compare to “martial arts films” per se; it’s yet a slugfest of hard hitting, entertainment with plenty of skill on display.

Dalton and Jimmy square off

A sharp knee to Jimmys head

A different kind of dirty dancing