Before there was “Ong Bak“, it was “Kickboxer” that introduced so many of us in the English-speaking world to Muay Thai. Every remake/reboot arrives with the challenge of both living up to and distinguishing itself from the original, but that’s certainly a tall order for “Kickboxer: Vengeance”. The final product isn’t without its issues (one in particular that you’d have to try to not notice), but it nevertheless proves to be an enjoyable fight fest thanks to a near-ceaseless stream of decently-orchestrated fight sequences. The story structure does the exact thing every remake should do, namely not leave you feeling like you’ve just seen the original movie merely with different actors!

Stuntman turned leading man Alain Moussi steps into the role of Kurt Sloan, while the star of the original “Kickboxer”, Jean-Claude Van Damme, portrays his Muay Thai mentor Master Durand – hey, who better to train the new Nuk Soo Kow than the original? The late Darren Shahlavi plays Kurt’s ill-fated brother Eric, who falls victim to the fury of the vicious Tong Po, played by Dave Bautista, while MMA champ Gina Carano portrays the duplicitous fight promoter Marcia. She’s not the only MMA legend to appear in the film, though. Georges St-Pierre assumes the role of Kurt’s ally Kavi, while fellow MMA fighters Cain Velasquez, FabricioWerdum, and Tyron Woodley drop in to give our hero a run for his money. T.J. Storm and Matthew Ziff also make appearances in the roles of Storm and Bronco, respectively, while Sara Malakul Lane portrays Thai cop Liu, who becomes a romantic interest for Kurt.

Kurt Sloan arrives in Thailand from America with vengeance as the only thought on his mind. His brother Eric, a world champion kickboxer, had earlier been enticed with a hefty payday by the two-faced fight promoter Marcia to face Thailand’s underground champion, Tong Po. Kurt had initially advised Eric against the fight, but ultimately headed to Bangkok to support his brother, arriving just in time to witness Tong Po’s quite intentional murder of the former champ. After his initial plot to punish his brother’s killer falls through, Kurt seeks out Eric’s former trainer, the crusty and reclusive Master Durand, who ultimately agrees to train Kurt to face off against Tong Po.

Kurt has vengeance on his mind

Master Durand prepares to impart his wisdom to Kurt

The duplicitous Marcia stacks the odds in her favor

Reboots of beloved classics are a hard sell to make and it’s to the credit of “Kickboxer: Vengeance” that it avoids falling into the same trap that fells so many -that being too similar to the original. An example of how not to do it is the 1998 remake of Alfred Hitchcock’s “Psycho”, an update so absurdly close to the original as to be unintentionally funny. “Vengeance” wisely goes more the route of Zack Snyder’s 2004 re-imaging of “Dawn of the Dead” (which is both one of the best zombie movies and best remakes ever made, in my opinion!) It uses the core premise of its predecessor as its foundation, and charts its own course from there.

“Vengeance” differentiates itself from the original “Kickboxer” in several ways – it introduces new characters, different set pieces and plot elements, Eric actually dies at the hands of Tong Po as opposed to being crippled and the overall flow of the story is totally different from original. It may seem like an odd thing to devote so much time heaping praise on, but have a glance over the history of remakes and reboots, and you’d be surprised just how many hew too closely to the original. Take note, forthcoming Hollywood remake of “The Raid”!

“Vengeance” is also a considerably more fast-paced movie than the original and in some ways, this is to its detriment. The film seemingly arrives to the climactic fight with Tong Po so fast that you’ll probably wonder if you’ve been watching the film on fast-forward, and this ends up costing it some of the necessary breathing room in its training sequences in comparison with its predecessor.

Kurt develops a romance with Liu

Kurt gains an ally in Kavi

Gina Carano is also sadly underutilized and mostly just gets to intone a lot of smug, sinister lines without so much as throwing a single punch. And let’s go ahead and address what is sure to be the elephant in the room – for some inexplicable reason, as much as a third of Jean-Claude Van Damme’s lines are dubbed by someone doing an impression of him that’s approximately as convincing as mine. Nevertheless, “Kickboxer” fans will also be happy to know that if its action you seek, you’ve come to the right place.

At minimum, a good seventy percent of the film involves the activity identified in the title, with the welcome services of renowned fight choreographer Larnell Stovall. Dave Bautista, of course, needs only step into a room to be a powerful presence and proves to be a laudable choice for Tong Po, with his trouncing of Eric just as vicious and brutal as the first time around (I still get a little choked up at seeing Darren Shahlavi onscreen.)

There’s almost no member of the cast that Alain Moussi doesn’t end up sparring with, starting with a solid match-up with Georges St. Pierre in the film’s opening. Durand himself also puts Kurt’s skills to the test before accepting him as a student in a duel in the rain that’s a little reminiscent of “The Last Samurai”. Durand of course, is hardly finished torturing Kurt though, and the film’s training sequences provide an answer for anyone asking if it’s possible to pedal a bicycle underwater.

Kurt must prove himself worthy to study with Master Durand 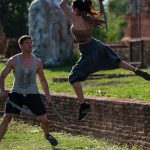 Kurt sharpens his skills with a sword

However, the centerpiece of any “Kickboxer” film is going to be the climactic fight with Tong Po, and this is where the reboot does the original proud. Alain pours forth great effort in going up against Dave Bautista and once again, the film knows what to omit from the original and what to retain – the “Nuk Soo Kow” chant, at least one use of the famed helicopter kick and of course, the hand wraps coated with broken glass. Leave out dropping the coconuts on Kurt’s torso if you must, but our glass-covered gloves we must have come hell or high water.

While it could have benefited from some better pacing, and the dub on Van Damme’s voice is a head-scratcher if ever there was one, “Kickboxer: Vengeance” is a fun reboot with no shortage of what its title promises. It also knows to pay homage to the original without getting carried away with too many similarities, and Alain’s definitely got the skills of a true Nook Soo Kow, on top of being a pretty cool dancer, as we learn during the end credits!

Kurt leaps in for a strike

Kavi launches an assault on Kurt