What can we say about “Crouching Tiger, Hidden Dragon” that hasn’t already been said? For millions in the Western world, it is the film that introduced them to the sub-genre of martial arts films known as wuxia – martial chivalry. Coupled with the popularity of “The Matrix” released the previous year, the film would also make the name of action director Yuen Woo-ping known around the world, and the graceful, wire-enhanced combat of both films would become a staple of martial arts choreography in Hollywood action films for years to come. It would also pave the way for similar wuxia films such as “Hero” and “House of Flying Daggers” and remains, to date, the only martial arts film to receive an Oscar nomination for Best Picture!

Chow Yun-fat takes on his very first martial arts role as Li Mu Bai, a scholarly Wudang-trained sword master. More widely known in the English-speaking world for his gritty collaborations with John Woo such as “Hard Boiled” and “The Killer”. Chow assumes the sage-like role with great ease, and you’d never guess his inexperience with martial arts filmmaking if this were the first time you saw him onscreen. The reigning queen of Hong Kong action films, Michelle Yeoh, joins him as his unrequited lover, Yu Shu Lien. Far from a newcomer to the martial arts genre, she is right at home in the role of the film’s warrior woman and harkens back to her role in “Tai Chi Master”. Her fellow martial arts veteran Chang Pei-pei is equally potent in the role of Li Mu Bai’s sworn enemy Jade Fox, and she shows little sign of slowing down from her Shaw Brothers’ days. However, the film’s narrative is largely told from the perspective of Jen Yu, portrayed by the film’s breakout star Zhang Ziyi. Like Chow, she came into the film a rookie to martial arts, but threw herself head first into the action and enlivens the film with her tenacity. She was also notably the only native Mandarian speaker of the main cast, which would lead the film to receive some criticism in the press, given that Chow and Yeoh’s pronunciation of their dialogue would be similar to someone with the American Southern accent trying to sound like a stereotypical New Yorker.

Allow me to make my point

Ive eyes in the back of my head

I said no one interrupts MY tea time

Hey you said it was nothing personal

Easy now why not lets be friends..

Set during the 43rd year of the Qing Dynasty, Wudang-trained swordsman Li Mu Bai ponders his decision to retire from his warrior lifestyle, weighing it against his obligation to avenge the murder of his teacher at the hands of Jade Fox. He also struggles to repress his hidden affections for his fellow warrior Yu Shu Lien, which she similarly reciprocates without openly acknowledging. After deciding to retire, Mu Bai entrusts his sword, the Green Destiny to Shu Lien to transport to Peking to his close friend Sir Te. Sometime after making the delivery, the Green Destiny is stolen by a masked bandit, with whom Shu Lien fights but is ultimately unable to apprehend. Mu Bai and Shu Lien trace the sword to the estate of the visiting Manchu Governor Yu, and learn that Jade Fox has posed as the governess of the Yu’s daughter Jen. After a battle with the visiting inspector Tsai and his daughter May, Mu Bai intervenes and is prepared to avenge his master and reclaim the sword when the masked bandit comes to the aid of Jade Fox, who kills Tsai but the pair flee together. It turns out the bandit is none other than Jen, who hopes to escape her upcoming arranged marriage for a life of adventure. Jade Fox also realizes, based on Jen’s skill in the pair’s duel with Mu Bai, that Jen’s fighting skill has now eclipsed her own.

Later, the desert bandit, Lo, arrives to take Jen away from her confinement in the life of the governor’s daughter. The two had previously met when Yu’s caravan was attacked by bandits in the Gobi desert, and the two became lovers before Lo ultimately convinced her to return to her family. Lo interrupts Jen’s wedding to beg her to leave with him, and later takes refuge from her enraged family at Wudang Mountain on the urging of Mu Bai and Shu Lien. Meanwhile, Jen flees her new husband, and after easily emerging victorious during a battle in a local inn, she is finally confronted by Shu Lien and Mu Bai to return the Green Destiny, and finds herself battling against her destiny as the Governor’s daughter along with Mu Bai’s desire to take her on as a student.

It’s interesting that while the preference for the presence and extent of wire work in martial arts films varies among fans, “Crouching Tiger Hidden Dragon” seems to be the rare wire-fu movie that fans universally love regardless of which side of the debate they fall on. Along with “The Matrix”, which also employed the legendary Yuen Woo-ping as it’s action director, the wire-enhanced combat in the film would enrapture Western audiences so much that seemingly every other action-oriented film to emerge from Hollywood in the early 2000’s would have combatants defying gravity with the same grace (with some decidedly mixed results – it would work well in the “Kill Bill” movies, but do nothing but lend the utterly vacuous “Charlie’s Angels” films to greater mockery). While Chinese audiences already knew wire-fu well, most Western moviegoers had never seen anything quite like it.

In keeping with the wuxia theme, the action is largely weapons based, but bits of unarmed combat are sprinkled throughout the film as well. Most notably in Shu Lien’s duel with the masked bandit later revealed to be Jade Fox, which also introduces the viewer to the gravity-defying action that will make up the rest of the film. Indeed, Yeoh and Zhang’s duels are the film’s finest, putting to rest the absurd notion that martial arts flicks are strictly for men and boys. Their rematch later in the film plays almost like a crash course in Chinese weaponry, with Jen wielding the Green Destiny, a “Jian”, while Yeoh counters with the spear, dao, hook swords, and other weapons in increasingly rapid succession. Seasoned fans will be quite accustomed to the skill and grace that Yeoh exhibits after (then) more than a decade of action roles, but Zhang is truly impressive. With her dance background to guide her, she is incredibly adept in convincing the viewer that she can hold her own against a veteran like Yeoh, and in terms of novices trained specifically for a single martial arts heavy role, she’s easily the equal of Rain in “Ninja Assassin” and Jason Scott Lee in “Dragon: The Bruce Lee Story”.

Look what I can do 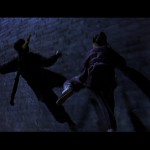 Proud as a peacock

If one word could summarize “Crouching Tiger Hidden Dragon”, it would be “poetic”. Wherever you sit on the wire-fu argument, it’s hard not to be awe-struck by the film’s balletic martial arts action and flair, not to mention to absolutely gorgeous scenery of China, easily some of the best ever committed to film. We can only hope that the upcoming sequel will be able to achieve the same greatness (although pulling Donnie Yen into it was definitely a step in the right direction) -stay tuned…!