Jackie Chan stars in the action-packed “threequel” to his previous two hits. For this film Jackie handed over directing duties to his good friend Stanley Tong.

Four years after the previous instalment and seven years after the original “Police Story”, action star Jackie Chan returned to one of his most popular roles, the virtuous martial arts cop “Kevin Chan Ka-Kui “.

Jackie’s co-star Michelle Yeoh (sometimes credited as Michelle Khan) had established herself as a very capable action actress in films such as “Police Assassins/Yes, Madam” and “Royal Warriors”. Here she plays mainland Chinese Interpol Inspector “Jessica Hana Yang “. In the previous films, there is no question that Jackie is the main man, but for this film, Yeoh’s character is virtually on equal terms.

Jackie’s opera school brother Yuen Wah stars as the ruthless gangster “Panther”. Wah is famed for his agility and has either appeared in or been a stunt performer in over 180 productions. He famously doubled for Bruce Lee in “Enter the Dragon” and had significant roles as villains in “Eastern Condors“, “The Iceman Cometh” and “Dragons Forever“.

Yuen Wah is the ruthless Panther

Yang kicks Chaibat in the head

There is a thrilling speedboat chase

Now a trusted part of Chaibat’s organisation, the gang travel to Kuala Lumpur in Malaysia to rescue his wife who is facing the death-penalty. She is the only one with the details of Chaibat’s Swiss bank account containing millions of dollars in drug money. Unbeknown to Ka-Kui, his girlfriend May is also in Kuala Lumpur. Ka-Kui must use all his skills to keep Yang and May safe, and take down Chaibat’s gang in a thrilling and death-defying finale.

The finale begins in Merdeka Square in Kuala Lumpur

The ever reliable Bill Tung as Uncle Bill

The battle in Thailand has some impressive stunts 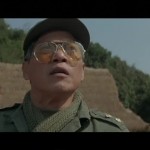 Posing as Fu Sheng to earn Panthers trust in prison

Jackie Chan had already set the bar pretty high with the original “Police Story” films, and had a lot to live up to with this one.

When Jackie gets to China he is given his undercover background as a factory worker and former martial arts champion, allowing him to show off a few of his old opera moves as he poses for some fake photographs. Michelle Yeoh as a Communist police officer is very professional, but not without a sense of humour. She takes Jackie on a tour of the training facilities, where dozens of cadets are practicing kung fu forms, sparring and breaking bricks. Yeoh sets up Jackie to spar with Wong Ming-Sing, AKA Sam Wong, the leader of the Jackie Chan Stunt Team. After a cagey start, the fight bursts into an energetic mix of Wong’s solid traditional style versus Jackie’s lighter-footed kickboxing.

When Jackie and Yuen Wah make their break from a prison-run coal mine, there is a mix of fights and Jackie’s Buster Keaton-esque action-comedy involving a mining cart. The scene culminates in a spectacular zip-line stunt over the Chinese countryside. Jackie, Yuen Wah and his gang meet up in a rural village, where Michelle Yeoh sensationally leaps into action. She split kicks two opponents and uses her northern wushu to help rescue Jackie and Yuen Wah. Fleeing to Hong Kong, the gang’s boat is intercepted by armed police, leading to a thrilling shootout and speedboat chase.

Michelle Yeoh performs an impressive jump onto a moving train

Michelle Yeoh insisted on performing her own stunts

One of the film’s biggest set-pieces takes place in Thailand’s “Golden Triangle”, as Chaibat’s gang take on rival drug cartels and a corrupt Thai General’s soldiers. The resulting shootout is on an epic scale with plenty of impressive explosions and stunts.

The film’s finale begins in Kuala Lumpur’s famous Merdeka Square, with Jackie jumping over a car at the last second so as not to be crushed by a runaway truck. In a nod to Jackie’s stunt on the side of a bus in the first film, Michelle Yeoh clings desperately onto the side of a speeding van. After a rooftop battle with Yuen Wah, the action takes to the skies as Jackie leaps onto a ropeladder trailing from Chaibat’s helicopter. Dangling perilously from the ladder, Jackie swings around the skyline of Kuala Lumpur, bashing into various obstacles, before landing on a moving train. Meantime, Michelle Yeoh makes her pursuit at street level on a motorcycle. She performs a very impressive stunt by jumping her motorbike onto the roof of the moving train. The train is the final setting for a fight with Jackie’s frequent co-star, Ken Lo, whilst Michelle Yeoh deals with Chaibat.

The end credits feature some of the outtakes from the film. Some are quite funny, and it is obvious that Jackie Chan and Michelle Yeoh have a great chemistry together. But they also reveal just how dangerous the stunts were, with Jackie injuring himself during the train sequence, and also nearly falling between the carriages. Michelle Yeoh has a particularly painful accident as she falls off the bonnet of a moving car. They are a stark reminder of the lengths that Jackie Chan and his team will go to in order to entertain action fans.

Maggie Cheung returns as May

Jackie leaps from the rooftop to stop Chaibat

Jackie Chan ups the ante with his death defying stunts

The original “Police Story” was one of the first Jackie Chan films I ever saw. Back in the mid 80’s, there hadn’t been anything quite like it and it confirmed me as a lifelong fan of Jackie Chan’s films, always seeking out his next one. “Police Story 3”, probably wisely, doesn’t try to re-tread the ground of the previous entries in the series. Jackie collaborates here with his friend Stanley Tong, a former stuntman himself, who directs the film with style, using crane shots and wide frames. Coupled with the international locations it makes this instalment feel glossier, grander and epic in scale. Having Michelle Yeoh as Jackie’s sidekick gives the film an extra edge, and Yuen Wah is especially good as the bad guy. The supporting cast also put in decent turns.

The fight scenes aren’t drawn out, but we do get lots of bursts of the fast and furious style that Jackie established in the original film. Michelle Yeoh’s first fight in the rural Chinese village is particularly good. Of course the Police Story films aren’t just about the fights, they are equally famous for their incredible stunts. In a bid to top his previous work, Jackie ups the ante with the airborne finale in the skies over Kuala Lumpur. During the end credits, the outtakes reveal just how dangerous some of the stunts were, including the gags carried out by Jackie Chan and Michelle Yeoh on a moving train that could so easily have seriously injured them, or worse.

It is usually difficult for the third film in a successful series to be as good as its predecessors, but for me, I actually prefer watching part three to part two. Whilst “Police Story 2” had some terrific fights and action, I thought it didn’t gel. “Police Story 3” moves at a tremendous pace and has a greater variety of action. The prison break is well done, the village fight is short but sweet, there is an exciting boat chase and shootout, the confrontation in the Thai jungle is appropriately explosive, and the stunt-filled finale in Kuala Lumpur is breathtaking. Even the Chinese-language comic moments work.

Jackie Chan does his best Superman impression to avoid being toast

Getting back to his opera roots

This ranks among the best of Jackie Chan’s contemporary-set action films and just like “Drunken Master 2“, it is absolutely crying out for a Hong Kong Legends-style release. If you can, try to seek out an original Hong Kong version of the film rather than the inferior American release. It’s well worth it!