Action superstars Jet Li and Michelle Yeoh team up with legendary director Yuen Woo-ping in this action-packed tale on the origins of the Grand Ultimate Fist – Tai Chi Chuan!

Martial arts superstar Jet Li takes the lead role as the legendary Taoist master “Zhang Junbao/Zhang Sanfeng”. Legend has it that the real Zhang Sanfeng created the concept of neijia (internal martial arts), specifically Taijiquan. He is alleged to have lived until he was 307 years old!

Although she is credited as “Michelle Khan”, the Queen of Hong Kong action films Michelle Yeoh stars as “Siu-lin /Qiu Xue (Falling Snow)”. Having established herself as a very capable action actress in films such as “Police Assassins/Yes Madam” and “Police Story 3: Supercop“, Michelle got to fully establish the hyperreal wire fu skills that would serve her so well in the international smash hit “Crouching Tiger, Hidden Dragon“.

Director Yuen Woo-ping’s brother, Yuen Cheung-yan appears as “Reverend Ling”. Although an action director in his own right, he often makes cameo appearances and has acted in the “Charlie’s Angels” movies, “Fist of Legend”, “Kung Fu Hustle” and “Drunken Tai Chi” to name but a few.

A former member of China’s national Wushu team Sun Jia Kui plays the Royal Eunuch “Liu-jin”. He had previously co-starred with Jet Li in the Shaolin Temple trilogy of movies. In “The Shaolin Temple” he played a fighting monk who specialised in the drunken pole. He had his biggest role in “Kids from Shaolin” as the devious cross-eyed villain. Another star of the Shaolin Temple movies is real-life Praying Mantis master Yu Hai, who true-to-form plays the “Shaolin Head Master” in this movie. 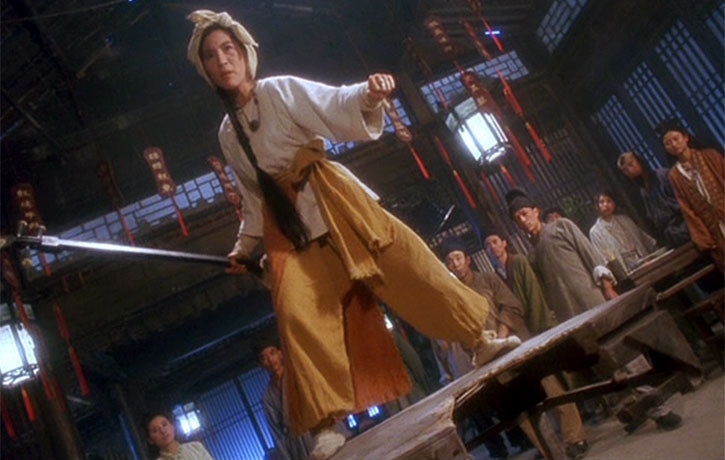 The film is peppered with humour

Orphan monks Junbao and his brotherly best friend Tian-biao grow up training together in the Southern Shaolin Monastery in Fujian. During a tournament for promotion in Shaolin, Tian-biao nearly kills another student for cheating with a concealed weapon. The Head Master refuses to believe Tian-biao’s reasons, and following the resulting fight, Junbao and Tian-biao are expelled from the temple. Reliant on their kung fu skills to survive in the outside-world, the Governor’s Second-in-Command is impressed enough to recruit them to his army. Junbao is reluctant to become a soldier for the Governor, but Tian-biao seizes the opportunity to improve his lot and they go their separate ways. Junbao aids rebels Falling Snow and Little Melon, who fight against the army that collects taxes from defenceless people on behalf of the wicked and greedy Governor. In the meantime, the ambitious Tian-biao has taken a dark path to rise through the ranks. He betrays his old friend Junbao and sets an ambush for him. While recuperating from Tian-biao ‘s trap, Junbao has an epiphany that inspires him to create the martial art of Tai Chi Chuan.

In the ultimate battle, Junbao must pit his newfound skills against Tian-biao and his army.

Junbao and Tian biao have each others backs

The opening credits play over footage of dozens of students performing synchronised postures from the popular Yang-style 24 Step Tai Chi form, led by star Jet Li as Junbao/Sanfeng. Flashing back to Junbao’s youth, we witness him and his childhood friend Tian-biao  watching the Shaolin Kid Monks practicing a mix of Shaolin-style kung fu and wushu forms. The two friends decide to learn these skills to help fight off those who bully them.

While they sweep the temple floor, they use their brooms to practice wushu cudgel basics. A nice bit of camera tracking smoothly brings us forward a few years to Chin Siu-ho and Jet Li having a friendly duel with their brooms. Cue the obligatory “life at the Shaolin Temple” sequence, featuring rows of monks exercising whilst balanced on their heads, which they also smash piles of bricks with, Junbao and Tian-biao practicing deep stances and slick footwork at the dinner table in lieu of any benches to sit on, and also using their considerable skills to wring out the laundry!

Daily life in the Shaolin Temple 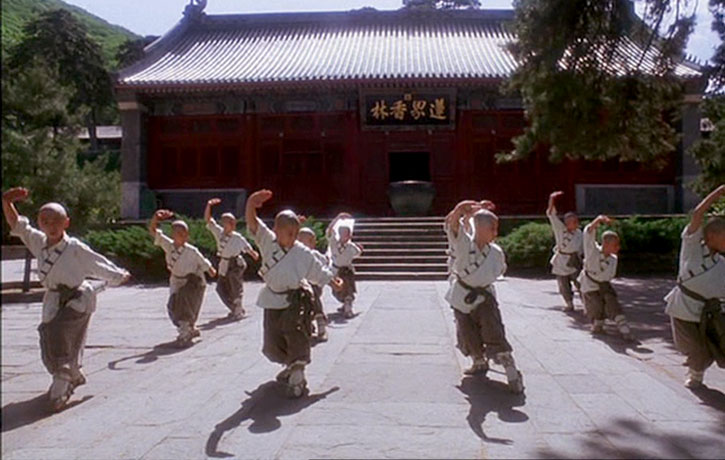 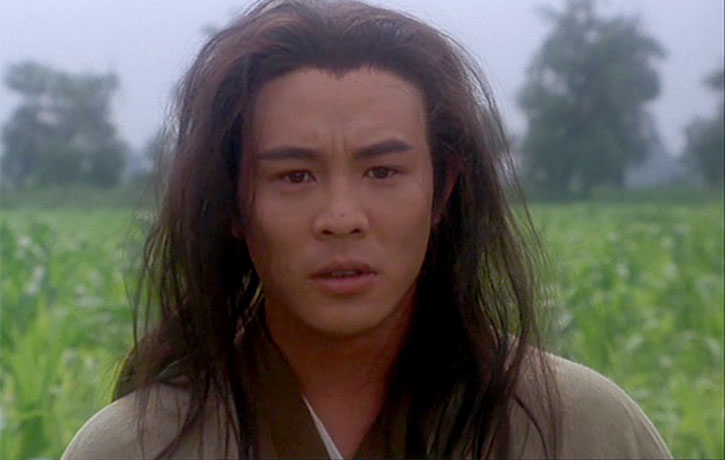 Junbao has an epiphany

Michelle Yeoh is as good as ever in the action scenes

Whenever Yu Hai appears in a film it’s always a treat to see this real-life master perform a kung fu routine and he obliges here with a short but powerful demonstration. The payoff is an altercation with Chin Siu-ho that soon turns into a full-on battle with dozens of monks armed with cudgels. Up until this point, much of the action has been grounded, but here we get the full turbo-charged, wire-enhanced, power-powdered fighting that dominates the choreography in this film. It’s a well-shot and edited sequence using overhead views and jumping between lightning fast strikes and slow motion precision.

Michelle Yeoh makes an action-packed introduction into the story as a Sanxian (Chinese Lute) playing kung fu fighter. Although there is lots of wire-assistance, Michelle certainly shows why she has endured in the martial arts genre with some silky, high-kicking skills, many of which she performs on stilts! As the movie progresses, Michelle Yeoh looks equally skilled not only with swords, but the extremely difficult to master San Jie Gun, or Three Sectional Staff. 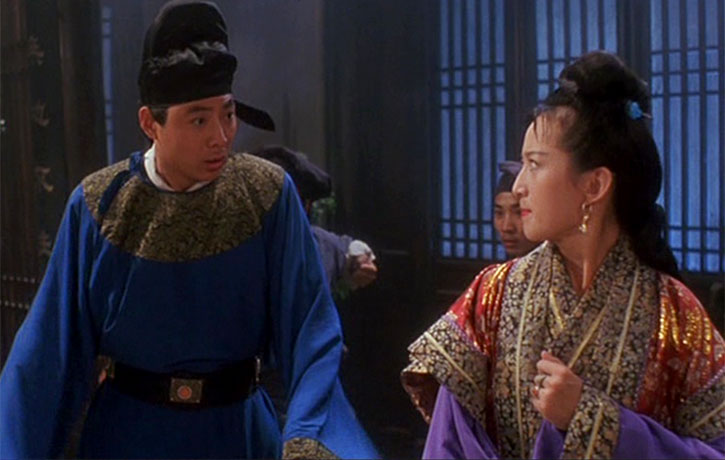 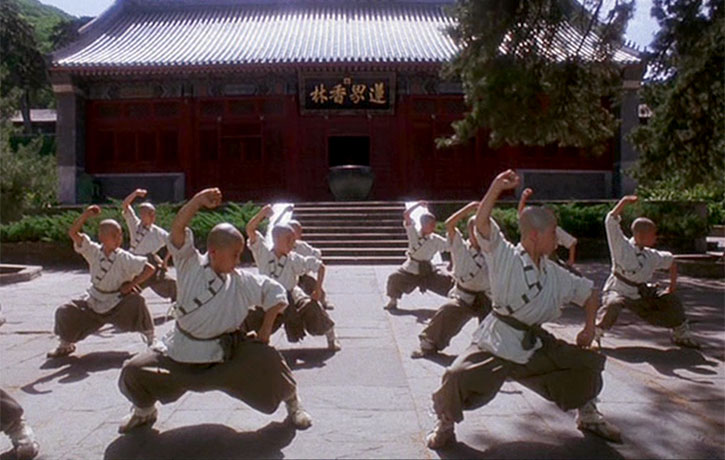 The two friends learn kung fu to fight off bullies 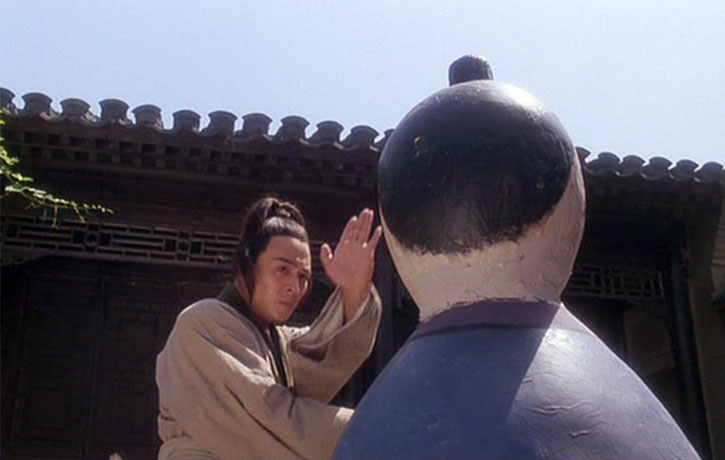 A couple of the major action set-pieces feature a sword duel up and around a stack of wooden logs, and later on a wooden scaffold. The wirework goes ballistic in these scenes and the wires themselves are very visible. It’s a shame as it detracts from some otherwise entertaining choreography.

When Junbao eventually reveals the principles of his Tai Chi style, Woo-ping makes great use of various props to illustrate them. Jet Li handles a ball better than Lionel Messi, as he spins it about his torso. A skittle shaped dummy rolls around Jet’s arms with ease, and a pot of water swirls and flows in the shape of the Ying Yang as a result of the energy from Junbao’s Tai Chi fists. When he finally applies his new skills, it is a reminder that taijiquan is the “grand ultimate fist” and not just an exercise for pensioners in the park.

With its bold colours and period sets and costumes “Tai Chi Master” is certainly a good-looking film. The opening few sequences are almost like a fourth chapter in Jet Li’s Shaolin Temple saga. The fight scenes are well edited, cutting between the rapid under-cranked combinations of techniques, and slow motion filming emphasising the power of the strikes. There is a LOT of great action throughout the film, especially when weapons are involved. However, it is ultimately undermined by some highly distracting wirework with completely visible wires. It took me out of the moment far too often and if you are not a major fan of “wire-fu”, it just looks plain silly.

The main story is quite good as one brother turns to the light, while the other to the dark. There is some broad humour peppered throughout, especially in the scenes involving Yuen Cheung-yan, that made me chuckle. Interestingly, much of this was edited out for the original Western release when it was re-titled “Twin Warriors”. The lead actors all give very good accounts in the acting department and are exemplary when performing martial arts. When the Tai Chi skills do finally appear in the action scenes, although some are a touch fantastical, there are some nice little fighting applications. It’s quite refreshing to see Tai Chi used this way in quite hardcore wuxia fights.

Fans of films such as “Swordsman 2” or the wire-heavy action of “Crouching Tiger, Hidden Dragon” will love “Tai Chi Master”. It is absolutely jam-packed from beginning to end with similar-style fights and is a classic example of the “New Wave” wuxia genre of the 1990’s, epitomised by Yuen Woo-ping’s action direction. 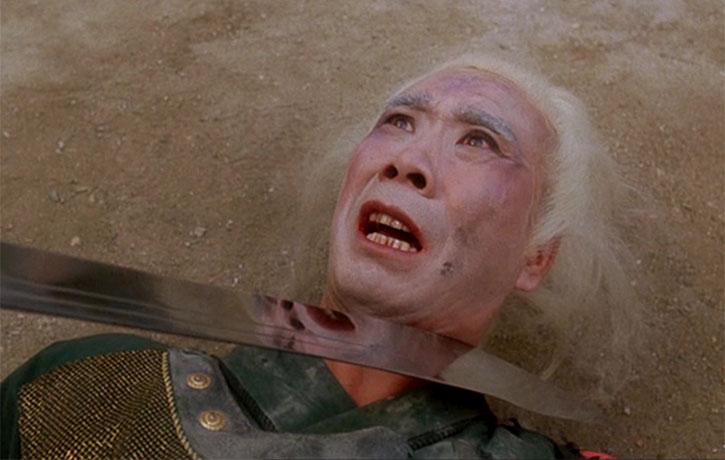 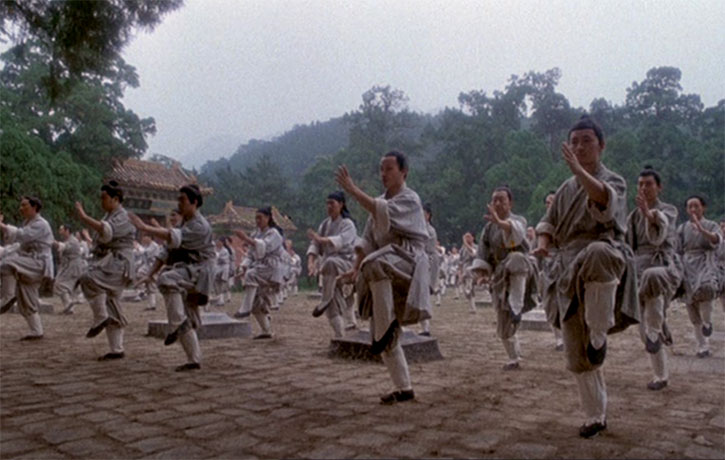 The High Pat on Horse posture

Tian biao seizes the opportunity to improve his lot 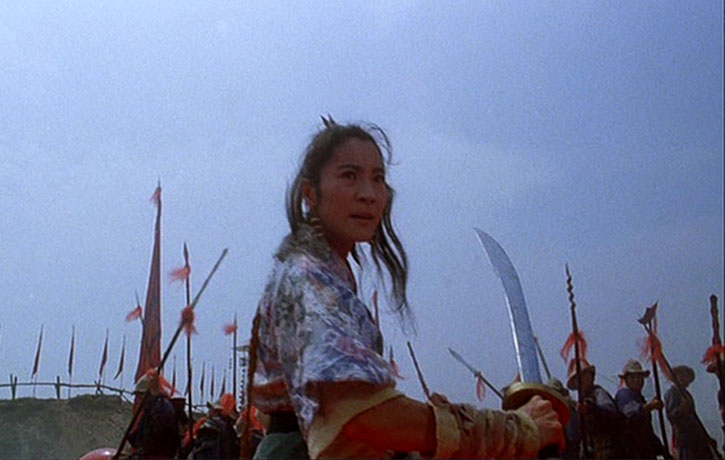 The Head Master does not believe Tian biao