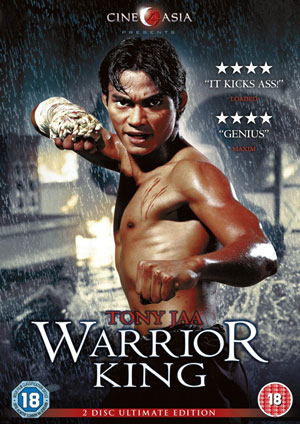 Tom-Yum-Goong is the original name of the film, whilst Warrior King is the UK name; it’s also known in the US as The Protector. This is Jaa’s second movie in a starring role, after the international success of his first movie – the legendary Ong-Bak.

Tony Jaa plays Kham, a good natured man who loves his pet elephants. Well-known Thai comedian, Petchtai Wongkamlao who starred in Ong-Bak, makes a return as Policeman Sgt. Mark. Johnny Nguyen plays Johnny, a gang leader with more ties than meets the eye. Bongkoj Khongmalai plays Pla- a girl with serious debts to pay. Xing Jin plays Madame Rose, an unorthodox character baying to be head of her criminal family empire. Damian De Montemas is Inspector Vincent, a ruthless, corrupt police Inspector on the payroll. Lateef Crowder, (who looks a lot like Eddy Gordo from Tekken) is a fighter with no name, but with an extraordinary beautiful and deadly talent (no joke)! Lastly we have former WWF (now known as WWE) wrestler, Nathan Jones, as T.K, a very, VERY scary-looking guy!

Kham’s father, Koi, is a man who is very proud of his pet elephant family, in fact he and his son both consider them to be family (elephants are considered sacred in many parts of Asia). A large festival occurs in which members of the public bring their best elephants to win a contest that traditionally would have enabled their elephants to be used in battle for the King of Thailand. During this festival, Koi is duped by a phony elephant inspector into winning the competition. Koi cannot believe his luck and hands over his most prized elephant for coronation. The elephant begins to growl. Koi changes his mind. As he attempts to fend off the inspector’s men, he is shot and left for dead. During this time, the baby elephant of the family is running around playing pranks on the local kids (which has a light-hearted moment or two. But, he too is captured by the local crooks, who then put him in to a caged lorry. As Koi is bleeding to death in the street, Kham runs to his father’s aid, only to be told that he must get their elephant back. After witnessing the calf go straight past him in the caged lorry, the adult elephant makes a break after the youngster – only to be tricked himself!!

At a party taking place in a swanky house, everyone is having a good time…until Kham arrives! Kicking and smashing people brutally and asking questions later, he takes out his fury on anybody that gets close to him (or whether they just look like they deserve a slap)! What is Kham’s purpose? He is after the fake festival inspector, who is actually a crooked local politician. After Kham’s interrogation, the politician gives Kham the picture of a man named Johnny. Kham then drags the corrupt counselor away for a thrilling ride!

The start of your ending…

Take one of these and call your doctor in the morning!

Next we have the supporting cast. First we have Sgt. Mark and his new partner Officer Rick. Sgt. Mark is something of a local celebrity. When a call comes through of a situation he takes off to help in an unorthodox manner – quite funny. The second character is Pla – a young woman who is burdened with the debt of her murdered boyfriend, who was the previous owner of the Tom Yum Goong restaurant. Next we have the real villain of the movie – Madame Rose. At a family meeting she tries to please an elder, (her ruling Uncle) who in turn insultingly humiliates her efforts and mocks the ambiguous nature of her sexuality (something she won’t forget lightly)!

Kham in the meantime has journeyed all the way to Sydney, Australia, leaves the airport in a taxi, whilst being followed by a police vehicle. This is where Inspector Vincent appears out of nowhere and really makes his mark in the movie (unpleasant guy too)! Kham explains to officers Mark and Rick why he is there. As they travel together, they stop at the Tom Yum Goong restaurant. Sgt.Mark is well known there and speaks to one of the workers – Goong. Luck is on Kham’s side as, lo and behold! Johnny emerges from the restaurant, as the new manager! Kham tracks Johnny to a public bridge. Kham is warned by Pla (who also hangs out with Johnny) that he should stay away from these guys. Kham does not heed her warning and continues to follow Johnny.

After an altercation with Kham, Johnny is left to explain the sequence of events to his boss – who is none other than…Madame Rose! As Kham recovers from the physical exploits of the day before, he has visions…

Meanwhile…in an attempt to meet the deadline she has been given to pay her late boyfriend’s debts, Pla tries her hand at being a (ahem) “hostess”. A private party is the venue for her and the two officers Mark and Rick, who have been re-assigned. This night is shared between the elder (ruling Uncle) that insulted Madame Rose and an Attorney General. A situation occurs in which Sgt. Mark and Pla are both scared for their lives! Later on Goong tells Kham that at Tom Yum Goong restaurant there is a secret! Kham makes his way there. Warrior King is about to explode!!

Sorry biker dude, it’s game over for you!

No, I said I don’t know how to play rugby!

One of the movie’s first fights takes place in a warehouse. Johnny sends a mixture of X-Games opponents, to all team up against Kham. This is a great start to the movie and is an enthralling ride through gymnastics, flexibility and all-out street fighting brutality. Jaa is excellent and show’s that even against great odds – there is a way out!

The next scene is without doubt the most complex and energy draining part of the movie – the staircase scene! This scene has Kham entering the main restaurant, fighting his way through to the top of a large, wide spiral staircase! Now let me start by saying this is epic – truly new and refreshing!! Tony Jaa shows brutal power, skill, endurance and absolutely no mercy for his foes! I cannot state enough how much I love this scene and confess I have watched it over and over again, including slow motion! This is a must see scene and if you haven’t seen this before, I would be shocked if you don’t like it!!

The next fight scene for me is one of my personal favourites. This is where Kham and Sgt. Mark are in a Buddhist Temple. The stage is set for some of the most beautiful and effortless fighting I have ever seen! Up first in the gauntlet is the Capoeira Master, Lateef Crowder. This fight is the first time I have ever seen Capoeira in its raw, unadulterated form, as it should be! The choreography is spellbinding, mainly to being hypnotized by Lateef’s dazzling physical abilities! Both combatants shine here, however, Tony Jaa looks second best in this scene, which is no easy feat! This scene was cut short due to Crowder’s real achilles tendon injury. However, this is brilliantly and beautifully captured footage, using high-speed cameras to the utmost. Next is Kham’s duel with a crazy swordsman. Dodging all over the place and not really getting stuck in…until Kham turns the tables on his jumpy opponent. Then…just as you think it’s over…the crazy T.K bursts through, roaring like the Incredible Hulk and grabs poor Kham by the throat, Undertaker choke slam style!!! All I need to say here is Tony Jaa gets messed up…bad! Nathan Jones is a SCARY guy and if you met him you’d want to be on his good side!

The final fight occurs when Kham takes out everyone in a lobby with ease. After he does this he precedes to a hallway…where he meets Madame Rose. Kham is horrified by what he sees (truly emotional for those that understand the loss). Suddenly time stands still! This…is…the…final…straw! Warrior King showcases many bone-crunching moves however, this is where it REALLY shines! Watching this had me wincing and felt genuinely sorry for the stunt guys (especially the guy that actually looked like he tore his hamstring – ouch indeed)! Kham brilliantly takes them all out…but then, guess who’s back? T.K is! After getting the better of Kham, T.K’s friends (another 3 guys that are built like him -actually they are previous World’s Strongest Man competitors!- the German, Heinz Ollesch, Phil Pfister (USA), and great Dane, Rene Minkfitz) appear! Kham meanwhile, is in another dimension. He eventually gets up to serve final justice! The tactics being used by Jaa are plain and simple to understand. Lastly (phew) we have Madame Rose herself. Thereafter unfolds one of the most devastating endings I have ever seen (similar to Jija Yanin’s Raging Phoenix).

Me and my friend vs all of you!

Kurt Angle would be proud of me!

I’m usually a nice guy but…!

A kick that even Pele would be proud of!

Warrior King can be described as having two parts. The first is the story where little or no action takes place. The second is where all mayhem wreaks havoc and every and anything happens! Warrior King is an insight into another part of Muay Thai that has rarely (if at all) been investigated or showcased, at any point in action cinema. The elephant guards of the past now share their skills with the world and hopefully more people will develop interested not only in Thai cinema, but also Thai culture. I look forward to Warrior King 2 (currently nearing completion) to see what Panna Rittikrai conjures up next! Now I would say that Warrior King is a hardcore, exciting, well told story movie. Tony Jaa has outdone his performance in Ong-Bak. I would say this is a classic and is something enthusiasts and casual viewers will thoroughly enjoy.

Trailer for "The Raid 2: Berandal" arrives!

"Ninja: Shadow of a Tear" headed to DVD/Blu-ray on New Year's Eve!

Amardeep Sidhu is a (very!) long time martial arts movie fan. On watching "Enter The Dragon", at five years old, became fascinated with Bruce Lee and by eight was hooked on the main man (Jackie) CHAN's movies! He has studied Taekwondo as his primary base, as well as mixed shaolin kung-fu, southern praying mantis, wing chun and capoeira. He is a keen movie watcher with a serious appreciation for fight choreography!