Jet Li is “Nameless” a small time prefect and master swordsman, so named as he was found as an orphan and not named. Li’s character is based on real life scholar and swordsman Jing Ke who attempted to assassinate the Qin Emperor.

Making up the film’s conspiratorial trio of skilled swordsman whose previously failed attempt on the King’s life sent them into exile include; Tony Chieu Wai Leung (“Hard Boiled”, “Infernal Affairs”) is Broken Sword, a calligrapher in hiding who is still troubled by his involvement in the previous assassination attempt which puts him at odds with his lover (Flying Snow) played by one of the first ladies of Hong Kong cinema, Maggie Cheung.

In the year 220 BC whilst the seven states of China are at war with one another, the Qin Emperor (Daeming Chen) confines himself to his palace having survived yet another assassination attempt this time by three of his top fighters, Long Sky, Flying Snow and Broken Sword. Nameless, a small town prefect and skilled swordsman arrives at the Royal Court claiming to have rid the Emperor of his assassins. Nameless must now convince the Emperor as to the validity of his claim or face execution.

Director Zhang Yimou (“Raise The Red Lantern”) is no stranger to the use of stunning visual scenery and effects to enhance a film’s central story, a trait he goes on to demonstrate with further aplomb in “House of Flying Daggers” and “Curse of the Golden Flower.” Working with cinematographer Christopher Doyle Yimou has created a veritable rainbow palette of vibrant landscapes that provide the backdrop for some equally stunning fight and battle scenes. From the film’s opening scene in the Emperor’s royal residence with its rich depth of scale, to the tens of thousands of black arrows shot into the air almost blocking out the sun then crashing into the deep calligraphy school, Yimou knows how to create a visual spectacle that screams epic.

The cracking wushu-esque fight sequences are choreographed as much for their elegance as their excitement while playing with the concepts of time and gravity, slowing duels down and freezing moments as fighters lunge effortlessly through air. These apparently magical qualities are designed to accentuate the fighting. Whether it’s Sky’s courtyard fight, first with some guards then with Nameless, or Snow and Moon’s flying sword flying duel through the red leaf forest, the fighting possesses a wonderful, silky grace more akin to a ballet performance than a brutal fight. The absence of violent scenes tend to be more incidental (and off camera) than explicit and highlight their story telling aspect and impact.

The Qin Emperor is hoping for good news 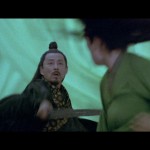 The Emperor survives an unexpected hit

Thats how you win a swordfight 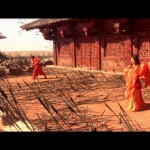 Surviving the rain of arrows

Snow gets the point in

Not so broken sword

The sword fights also play pivotal role in the story, embodying a Zen-like quality. The characters’ willingness to die might seem confusing to some viewers, however, the focus is not so much on dying than the manner of dying with an intrinsic belief that to lose is to win; defeat to an enemy becoming a vital chess-like move in the bigger scheme of things The use of traditional Chinese calligraphy practiced by Broken Sword also provides a key link in the tale with the swordplay and which becomes apparent at the end.

“Hero” is a story told from different perspectives adding an enigmatic tone as each version could be equally true or false. This interweaving tale of mistrust, beautiful, stunning and vibrant fight scenes (that transcend the traditional martial arts battles) while portraying an age old tale told in an emotionally refreshing way, along with the philosophical undertones, are why “Hero”, like “Crouching Tiger, Hidden Dragon” before it, has helped transform the genre. All the cast give engaging, visceral performances matched by their impressive Wu shu and acrobatic efforts. 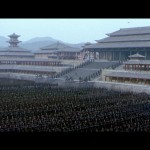 Nameless breaks up a domestic

Nameless and Sky would rather duel than play chess 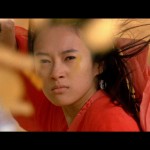 Moon is is eclipsed by need for revenge 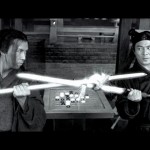 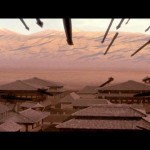