Appropriately enough for a movie that both pays homage to and spoofs the kung fu films of old, the cast features a couple of stars from the era.

Leung Siu-lung stars as “Tiger”, one of Master Law’s senior students. Often credited as “Bruce Leung”, he appeared in many classic films throughout the 1970’s, including Angela Mao’s “Hapkido” and Jackie Chan’s “Magnificent Bodyguards”. Often working as an action director, he came out of retirement from acting in 2004 to play “The Beast” in Stephen Chow’s “Kung Fu Hustle“. He has worked steadily since, appearing in the hit films “Tai Chi Zero” and Jet Li’s “Badges of Fury“.

Master Law’s other senior student is “Dragon”, played by Shaw Brothers star Chen Kuan-tai. He appeared in the classics “The Boxer from Shantung”, “Challenge of the Masters” and “Executioners from Shaolin”. Chen directed and starred in the 1977 film of “Iron Monkey” and later featured in “The Shanghai 13“. In recent years, he has appeared in the Donnie Yen movies “Dragon Tiger Gate” and “14 Blades”, as well as “The Man with the Iron Fists” and “Once Upon a Time in Shanghai”.

Cheung is a wimpy loser 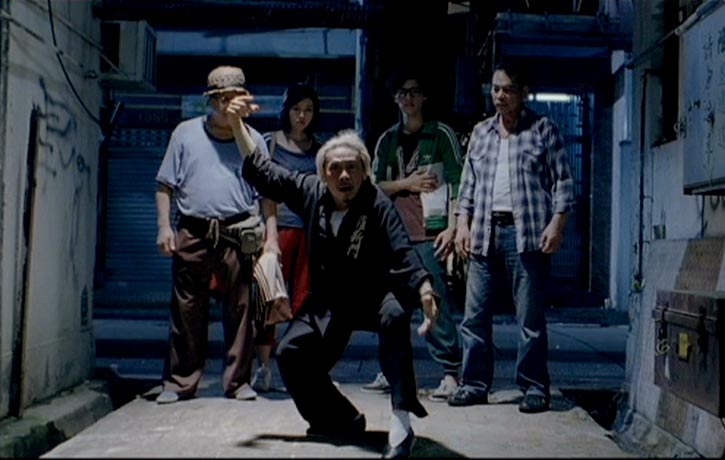 Singer-songwriter, actor and director Teddy Robin plays the grouchy “Master Law Sun”. He has composed scores for the “Aces Go Places” series of films, Chow Yun Fat’s “City on Fire” (the film that inspired Tarantino’s “Reservoir Dogs”), Wong Kar Wai’s acclaimed “As Tears Go By”, and the action-comedy “Tiger on the Beat“, to name but a few. Robin had a comedic cameo in Tsui Hark’s Chinese box office smash “Detective Dee and the Mystery of the Phantom Flame“.

A real-life martial artist with underworld connections, Michael Chan Wai-man plays the rival school’s “Master Pong Ching”. With nearly 200 credits to his name he has appeared in Jackie Chan’s “Dragon Lord” and “Project A Part 2“, as well as the “Young and Dangerous” Triad movies, and Brandon Lee’s “Legacy of Rage”. Best known as “The Toad” in “The Five Deadly Venoms” and “Golden Arm Kid” in “Kid with the Golden Arm”, Lo Meng, credited here as Turbo Law, plays “Jade Kirin”. In recent years he has made cameo appearances in “Ip Man 2“, “Ip Man 3” and “The Grandmaster“. A glamorous and racy star of the 1970’s, Susan Siu Yam-Yam Shaw here plays “Dr Fun”, who has attended to Master Law throughout his coma.

Leading the youthful part of the cast is Hong Kong actor Wong You-nam as the hapless “Cheung”. Martial arts movie fans might recognise him as Yuan from Donnie Yen’s “Ip Man“, the son of a restaurant owner in Foshan, who causes trouble. Model and actress JJ Jia plays “Kwai”, the daughter of a widow that Dragon and Tiger helped save. She is married to “Riki-Oh” star Louis Fan Siu-wong and appeared in the Hong Kong crime blockbuster “Cold War”. Rap artist MC Jin appears as the bully “Chung Sang-mang”, with Li Hai-Tao appearing as tough Sanda fighter “Pong Ka-kwun”.

The Gate of Law

As a child, Cheung dreamed of being a martial arts hero. In modern-day Hong Kong, Cheung has grown into a wimpy loser at a real estate company. When he upsets his boss, Cheung is given seven weeks to settle a dispute in a village in the New Territories. On his way to the village he is inspired to learn kung fu by a television commercial for a martial arts tournament.

Cheung meets two old martial artists, Tiger and Dragon, who look after their comatose kung fu instructor, Master Law. They are being harassed by Chung Sang-mang and his gang. It turns out Chung is the kid Cheung used to beat up when he was younger and is the real estate client he has been sent to see. Chung wants Dragon and Tiger to sell their lease on a teahouse which was used as a training dojo by their Master. When Master Law suddenly wakes up from his 30-year coma, he is determined to restart his school by taking on Chung and his Master, Pong Ching, in their martial arts tournament.

Master Law has been in a coma for 30 years

The alleyway brawl is slick

The teahouse is turned into a dojo once more

The opening credits evoke memories of classics such as “Kingboxer” or “Boxer from Shantung”, as the colourful silhouettes of kung fu masters perform martial arts to a Fist of Fury-sounding theme song.

As soon as Cheung arrives in the village, he is accused of bullying a kid and is ironically bullied himself as a consequence. An apparently slow-moving old man called Tiger steps in and he is also bullied by three thugs. All is not as it seems though. Tiger explodes into spectacular action taking out the thugs with some solid southern style kung fu. Despite his advanced years, Leung Siu-lung as Tiger moves incredibly, with the camera revealing it is really him throwing fists of stone and thunderous high kicks. After a brief stand-off in a restaurant, in which each elderly character introduces themselves in hilarious fashion, our hero Cheung gets beaten up at the local gym by the kid he used to bully.

The kid has grown into, Chung Sang-mang, a kung fu expert who has to wear a neck support! Chung and his thugs break into the teahouse and it emerges that Dragon is no slouch either. He still possesses plenty of fighting skills when he takes on Jade Kirin in a slickly executed one-on-one fight.

Master Law wants to beat the rival school in a tournament

Once Master Law awakens from his coma, he insists the teahouse is turned into a dojo once more. The training scenes play out like a hilarious mix of a 1970’s Shaw Brothers film and the Ben Stiller comedy “Dodgeball”! But the crazy Master’s teaching style seems to work as Cheung’s skills and knowledge improve his fighting ability against Sang-mang. In an alleyway brawl, Jade Kirin and Dragon have a bruising rematch that is even slicker than their first duel.

In true old-school style, Cheung challenges Pong’s rival school to a match. And what a match it is! It’s great to see the old boys still able to mix it up with the youngsters, pitting their old school kung fu moves against a modern athletic kickboxing style. Even though this a comedy, the fight choreography is as impressive and hard-hitting as anything you might find in a more serious kung fu film.

Ever since Jackie Chan’s kung fu comedy “Snake in the Eagle’s Shadow” became a smash hit in 1978, there has been a steady stream of comic martial arts films. Jackie himself became the leader of the pack with films like “Drunken Master”, “Project A” and “Dragon Lord”. The “Aces Go Places” and “Lucky Stars” franchises were hugely successful, with these new style action movies contributing to the demise of the Shaw Brothers period films. As the “new wave” of Hong Kong cinema became popular in the late eighties and early nineties, director, writer, producer and actor Stephen Chow brought a more subversive and spoof-style to the genre with his hits “King of Comedy”, “Forbidden City Cop”, and “Shaolin Soccer”. His record-breaking film “Kung Fu Hustle” became one of the worldwide highest-grossing Asian movies of all time. “Gallants” however, is surely one of the funniest kung fu comedies that Stephen Chow and Jackie Chan had nothing to do with!

Wong You nam as the hapless Cheung

Laws Dojo has become a teahouse

The beauty of this film is that it respects the genre it’s spoofing. The little references to old Shaw Brothers movies, the hilarious dialogue (even though it’s subtitled) and crisp traditional kung fu choreography, blend perfectly. It delivers enough laughs to keep you entertained and some excellent fights that will satisfy martial arts fans. It is much to the filmmaker’s credit that the fighting side of things is taken seriously, with little slapstick and no fantasy wirework or CGI.

Most of the main cast give beautifully balanced performances bringing humanity and humour in just the right measures. Even though they are pitiful for the most part, by the time the final challenge rolls around you will care about their plight. Leung Siu-lung and Chen Kuan-tai are fantastic in the action scenes and make an engaging double act throughout. It is Teddy Robin however that steals the show from everybody as the cantankerous and outrageous kung fu master. Teddy also provides the film’s very appropriate Spaghetti-western/Shaw Brothers sounding music score.

Aside from being played for laughs, the film has heart and a moral that it is more important to win against yourself than anyone else, whatever your age and circumstances. It cleverly avoids cliché by subverting the usual “zero to hero” tale with wit and by respecting the intelligence of the audience.

If you enjoyed the likes of Stephen Chow’s “King of Comedy” and “Kung Fu Hustle”, or want a fun slice of martial arts action, definitely check out “Gallants”! 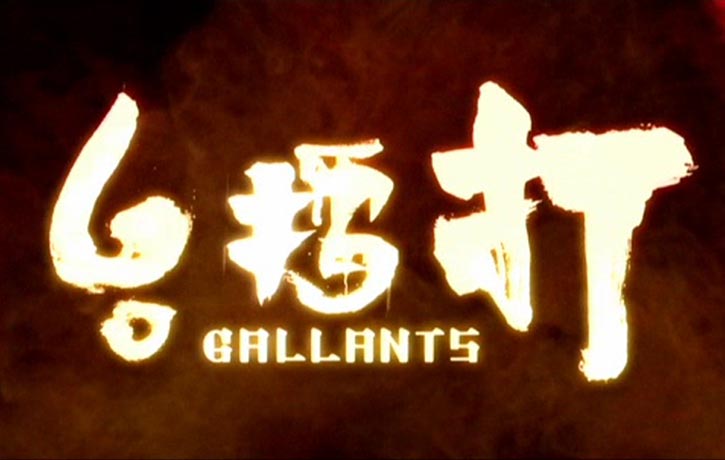 Master Law wakes from his coma