Hong Kong heartthrob actor and singer Ekin Cheng stars as “Hero Hua”. Cheng shot to fame in the “Young & Dangerous” series of films. It led to a series of collaborations with director Andrew Lau, including action films “The Storm Riders” and “The Duel”, along with appearances in Tsui Hark’s “The Legend of Zu” and Dante Lam’s “The Twins Effect”.

One of Asia’s highest-paid actresses Shu Qi stars as “Wood Ninja”. Qi found mainstream success co-starring alongside Jackie Chan in “Gorgeous” and Jason Statham in “The Transporter“. In 2015 she played the lead role in Taiwanese director Hou Hsiao-hsien’s acclaimed wuxia film “The Assassin“.

Chinese-born Canadian actress Kristy Yang plays “Jade”. In the summer of 1995, during a trip to Hong Kong, Yang participated in the Miss Asia Pageant beauty contest. Organised by ATV, Yang won the title of “Miss Asia 1995”, leading to a career in television and film.

Action legend and member of the famous Seven Little Fortunes opera troupe, Yuen Biao appears as “Boss of China House”. Working initially as a stunt actor and double in films such as Bruce Lee‘s “Fist of Fury” in the 1970’s, Biao became a leading Hong Kong action star in his own right with roles in the movies “Knockabout“, “The Prodigal Son” and “The Iceman Cometh“. He saw his greatest successes starring alongside his “opera brothers”, Sammo Hung and Jackie Chan, in the “Lucky Stars” movies as well as the hits “Project A“, “Wheels on Meals” and “Dragons Forever“. 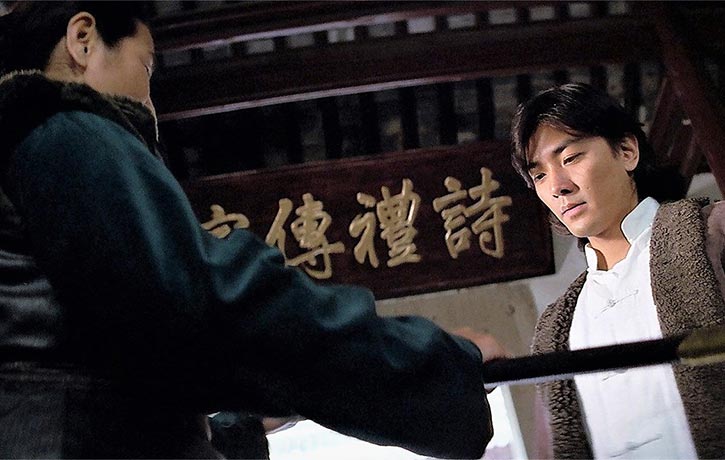 Cheng Pei Pei as Heros Mother hands down his sword

Another member of the “Young & Dangerous” cast, Francis Ng plays the powerful and aptly named “Master Invincible”. Ng has forged a career as a popular Hong Kong television and film actor, and has appeared in Jet Li’s “Kung Fu Cult Master”, “Flirting Scholar”, “The Bride With the White Hair”, “God of Gamblers III” and “Gen-X Cops“.

Told in episodic flashbacks, Hero becomes the skilled apprentice of a master swordsman called Pride. When Hero’s parents are murdered by opium traders, he wreaks bloody vengeance. His actions force him to flee China and sail for America, leaving his lover, Jade, behind.

Sixteen years later Hero’s son, Sword Hua and his old friend Sheng arrive in New York City. They find the China House, the biggest inn in the city, and a sanctuary for the Chinese immigrant population. In their search for Hero, Sword Hua and Sheng discover Chinese migrant labourers are being treated like slaves. They also become the targets of a secret ninja sect who are trying to steal a mythical Chinese heirloom.

As the flashbacks unfold, they reveal Hero’s escape to America was anything but a fairytale. The father and son must ultimately reunite to face the enemies that have arrived in New York, and protect their honour and the China House. 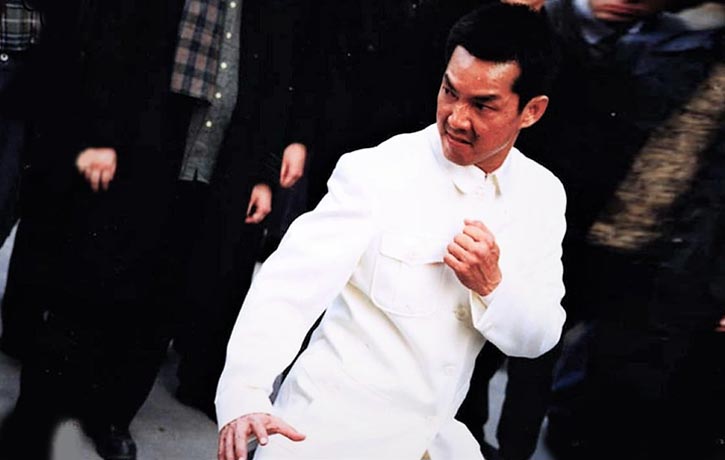 Its always a delight to see Yuen Biao in Fight Mode

As snowflakes gently fall to the ground, our hero, called er, Hero, performs a Jianshu form under the watchful eye of Master Pride. His Jian, or straight sword, possesses a unique ruby red blade. The sword routine itself wouldn’t win any medals at a tournament, but is entertaining enough in the context of the character showing off his skills.

Hero teams up with the mysterious Master Shadow to take on a gang of modern Japanese ninjas in a night time backstreet battle. Although predominantly CGI led, the choreography does include recognisable wushu techniques in amongst the flying around and rendered computer effects.

Yuen Biao returns to his roots hiding under the guise of a Chinese opera performer. The opera is just a cover for a surprise attack on the Steel Bull Canyon, and it quickly explodes into a mass brawl. Dynamite blows the stunt performers through the air like Olympic gymnasts, whilst Yuen Biao fights a literally on fire Jude Poyer. Yuen Biao has one other brief fight when Invincible comes looking for Hero at the China House. Again superhuman powers represented in CGI rule the fighting in a scene reminiscent of “Kung Fu Hustle”, but without any jokes. It’s always a pleasure to watch Biao in action, but he is woefully under-used in this film, and Ken Lo even less so.

The final epic duel harks back to the wire-intensive swordplay classics of old but infused with the CGI effects of the modern superhero movie. Taking place on the Statue of Liberty, I wonder if it was the inspiration for the final fight in the first X-Men movie, which was released the following year!

Hero teams up with Master Shadow

I was lucky enough to see this upon its Asian release in 1999. However, at the time I remember feeling a bit disappointed at the end. Yuen Biao didn’t have much to do, Ken Lo didn’t do anything, there was too much flying around, and lots of cheap-looking (by Hollywood standards) computer effects.

Revisiting it nearly 20 years later, I found “A Man Called Hero” much more entertaining. With the dominance of the Marvel movies over the last decade or so, I found myself watching this much more as a comic book hero movie, than looking for superior Asian martial arts movie choreography.

There are some quite large gaps between the action scenes linked by a story that was just about adequate enough to hold my attention. It’s filmed in quite a Hollywood style, with lots of quick cuts and tracking shots, although thankfully not to the detriment of the action sequences. Don’t get me wrong, in among the myriad of computer-generated effects, there are still one or two nice moves in the fight scenes, especially those involving Yuen Biao.

Approach this movie as a fantasy comic book fan rather than a martial arts movie fan, and there is a colourful and exciting slice of entertainment here for you.

What are your impressions of this one, and which movies featuring Yuen Biao do you remember and enjoy rewatching most? Let us know in the comments below, join in the conversation on Facebook and follow us on Twitter. (Get a kick out of our other fu-packed movie reviews!)