Few sequels surpass their original in generating the same exciting buzz and delivering a solid, continuing story rather than a rehashed plot. Yet the underdog champions writer Robert Mark Kamen (“The Karate Kid”) and John G Avildsen (“Rocky”, “The Karate Kid”) achieved that in droves with “The Karate Kid II”, a more epic film in terms of story, performances and of course some great karate action.

Ralph Macchio and the late Noriyuki “Pat” Morita return as Daniel Larusso and Mr Miyagi respectively. As the tale moves to Miyagi’s home, the beautiful island of Okinawa, they face two sterling adversaries; Hawaiian actor Danny Kamekona plays Miyagi’s old friend Sato, looking to settle an old score, and Yuji Okumoto is Sato’s nephew, Chozen, who takes an instant dislike to Daniel, especially after one or two confrontations that cause him to lose face.

Canadian–Japanese actress Nobu McCarthy is Miyagi’s old flame Yukie, and the film introduces Okinawan actress Tamlyn Tomita as Kumiko, a friend of the Miyagi family who takes a particular interest in Daniel.

Returning for the opening scene in cameos, from the first film, are burly karate master John Kreese (Martin Kove), and Daniel’s nemesis Johnny Lawrence (William Zabka), along with the rest of the Cobra Kai team.

Daniel san in the fight of his life

Ralph Macchio and Pat Morita are back

Six months after his win at the All Valley Karate Championship, Daniel feels his life is out of focus choosing to accompany his friend and mentor Mr Miyagi to Okinawa to visit his dying father. When they arrive Miyagi is greeted by his old friend Sato looking to end a forty-year feud with a fight to the death, and his nephew Chozen who’s inherited his uncle’s bitterness.

Whilst Miyagi is coping with loss of his father and refusing to be goaded into fighting Sato, Daniel immerses himself into Okinawan culture and way of life, falling in love with Kumiko – the Miyagi family’s friend. His run-ins with Chozen lead the two to build-up a feud of their own and soon, Daniel finds that he too may have to fight not for points in a tournament but for his honour and ultimately his life.

The art of fly catching 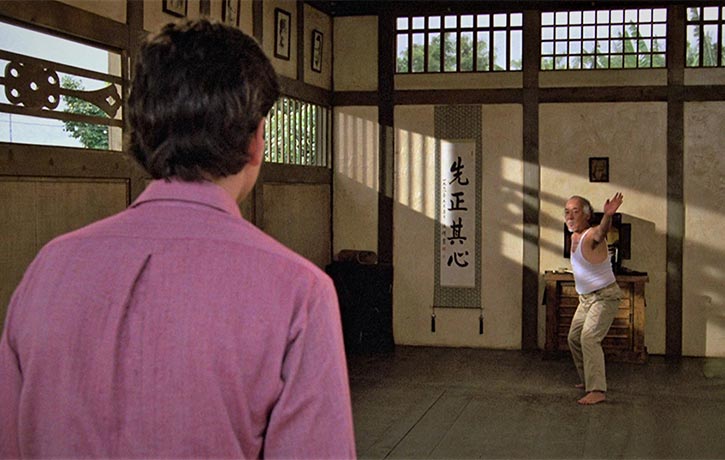 After a quick recap of the first film, picking up the story where it left off places Miyagi in the hotly anticipated confrontation with a very hot-headed Sensei Kreese. The showdown is entertaining and very much in keeping with Miyagi’s stoic zen-like character. Much of the film then focuses on Miyagi’s return home with Daniel in tow and it’s here that the added pathos of both characters shine.

Interspersed with the viscerally stirring storyline of the bonds of friendship and bitter battles is some nifty karate action, courtesy of Tang Soo Do master Pat E. Johnson returning as choreographer.

Kamen inserts all the qualities that made the first film so appealing, especially Miyagi’s cryptic and humorous yet memorable training philosophy – the drum technique is now a staple of my karate class. Where the film differs is the balance of visceral drama and the humour that appealed in the first film. Here we have one that focuses less on the latter, concentrating more on the drama. The fight action certainly reflects this as well, as Johnson staged some hard hitting skirmishes upping the intensity of the unfolding story with Daniel falling foul of Chozen’s brutal skills complimented by Okumoto’s venomous performance.

With Chozen, the series has its most complicated and deadly villain even bringing out a very different side to the normally calm and stoic Miyagi. The scene where Miyagi fends off Chozen and nearly impales him with a spear is a heart-stopping moment as we truly feel the depth of the conflict Miyagi battles inside.

The much anticipated final fight resembles a Kyokushin-style knockdown match, more brutal and bloody than the first film’s finale. Johnson’s choreography blends some powerful jumping kicks and spin kicks from Okumoto, with throws and some effective, painful-looking strikes from Macchio. Each punch, kick, and choke connects with intense ferocity, effectively sold by both actors, with a resounding finish accompanied by Bill Conti’s uplifting music score. Whilst not to take anything away from what remains to this day the revered classic showdown of the first film, the Chozen/Daniel fight is one of most dramatic and tense to watch. 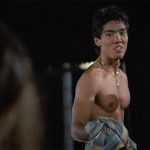 Yuji Okumoto as the fearsome Chozen

Need to break the ice

The battle gets bloody for Chozen

Where “Karate Kid” was a rite of passage for our young hero Daniel, part two marked his coming of age in this multifaceted life and death tale of bravery and honour.

Macchio’s performance mirrors his character’s evolution into maturity whilst the late Pat Morita gives an emotionally- charged performance worthy of more than just an O-SCAR nomination – the scene where Daniel is comforting a grieving Miyagi is certainly award-worthy. The film also affords more glimpses and screen time to supporting characters and cast from Nobu McCarthy and Tamlyn Tomita’s emotional strength to Danny Kamekona and Yuji Okumoto’s complicated villains.

It is also a film that immerses the story in the beauty of its Okinawan setting and culture brought to life with Bill Conti’s timeless and stirring score. The thought of a sequel to a self-contained story that left audiences with a head rush of victorious celebration must have been about as welcome as a crane kick to the face. Yet “The Karate Kid Part II” followed hot off the success of the first film and proved that not all sequels are quick cash-ins merely rehashing a familiar formula. By focusing more on Miyagi-san’s enigmatic origins and giving us a Daniel who grows in maturity, Kamen and Avildsen crafted a top notch drama that packs a punch in the finale.

Tensions rising whenever Chozens around

Miyagi and the vengeful Sato

Chozen crashes the party to reclaim his honour 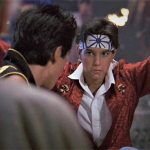 The crane is ready to fly

Which Karate Kid movie moments do you remember best and what are you expecting to see in  the new Cobra Kai series coming soon? Let us know in the comments below, join in the conversation on Facebook and follow us on Twitter. (Caught the karate bug yet? Check out our other movie reviews for that extra kick!)