Donnie Yen summons his inner Bruce Lee in this follow up to the classic story of “Fist of Fury”!

Martial arts superstar Donnie Yen returns to the role of “Chen Zhen”, a fictional hero from two of the most popular martial arts movies of all time. The character was most famously portrayed by Bruce Lee in his Asian box office smash “Fist of Fury“. Chinese star Jet Li portrayed Chen Zhen in what many fans consider to be his best martial arts film of all, “Fist of Legend“, a remake of the aforementioned “Fist of Fury”.

In 1995, Donnie Yen himself had previously played the role in a popular 30-episode television adaptation of “Fist of Fury”. Due to the success of this series, Donnie has become synonymous with the role of Chen Zhen in regions such as Taiwan and mainland China.

One of Asia’s most popular actresses of the modern era, Shu Qi stars as “Kiki / Fang Qing / Captain Yamaguchi Yumi”, a nightclub hostess and singer, who spies for the Japanese. Shu Qi will be familiar to martial arts movie fans from her roles in Jackie Chan’s “Gorgeous”, “A Man Called Hero”, “The Transporter“, and “The Assassin“.

Chinese actor Huang Bo appears as “Inspector Huang Haolong”, a police officer who is frustrated in his duties by the occupying foreign powers.

Feel those Fists of Fury 3

Can Chen Zhen thwart an assassination

Japanese actor Kohata Ryu plays the ruthless “Colonel Chikaraishi Takeshi”, whose past drives him on his vengeful hunt for Chen Zhen. Ryu went on to appear in director Gordon Chan’s “The Four” and the recent “God of War”, starring Sammo Hung.

Making a brief cameo is action legend Yasuaki Kurata, who has previously appeared in the Chin Woo/Jing Wu related moves “Legend of a Fighter” and “Fist of Legend”.

In 1917, Chen Zhen along with members of the Chin Woo Association join their fellow Chinese patriots who help the Allies fight the Germans in France during the First World War. Following the events of Fist of Fury/Legend in which a Japanese General was killed, Chen Zhen takes the identity of a fallen comrade to avoid any unwanted attention on his return to Shanghai. Chen Zhen and his loyal surviving friends from the war become part of an underground resistance movement who are determined to stop the Japanese empire from taking over China.

Donnie makes a great entrance as the masked hero

In 1925, Chen becomes a partner in the Casablanca nightclub which is frequented by high-ranking members of the foreign occupying powers. He uses his position to gather intelligence for his fellow underground fighters and to gain the support of the influential Triad boss and owner of the club, Liu Yutian. He also becomes close to Kiki, a nightclub singer who is spying for the Japanese.

When Chen Zhen thwarts an assassination attempt, Tokyo sends a list naming anti-Japanese activists to the ruthless Colonel Chikaraishi Takeshi in Shanghai. He has orders to kill all the people on the list. Chikaraishi deliberately leaks the list to the press causing panic among the local populace. Chikaraishi is aware of Chen’s true identity and challenges him to save those named. Chen and Chikaraishi engage in a race to save and assassinate the activists respectively. Chikaraishi is motivated in his mission by a secret personal connection to Chen Zhen.

With both men having their suspicions about the loyalty of Kiki, who will ultimately win the battle for the pride of their nations and their personal quests for vengeance?

A tribute to the classic Dojo Fight

The action opens with Chinese labourers and former members of the Chin Woo Association fighting German troops in 1917 Europe. Taking place on some very authentic-looking sets, the film doesn’t shy away from the horror of the conflict. However, when it comes to the martial arts choreography, the combat incorporates some sophisticated parkour-like feats and knife-fighting into Donnie’s familiar slick-kicking style.

Centering around the Casablanca nightclub, the action takes a hiatus as the film establishes a swinging but oppressed Shanghai of 1925, with the Japanese forces imposing their authority on the local population. Looking like a Chinese Errol Flynn, a moustached Donnie hides in plain sight at the nightclub. There are even a couple of musical numbers and Donnie gets to show off his genuine talent as a pianist.

Donnie busts out the nunchakus

Kiki gets close to Chen Zhen

Chen Zhen uncovers a plot to assassinate the warlord General Zeng that would spark a civil war. Dressed just like Bruce Lee’s masked character Kato from the television series “The Green Hornet”, Donnie spectacularly re-ignites the action when he foils the assassination attempt. Set in a rain-soaked city street, he moves athletically taking out all around him with his lightening hand speed and thunderous high kicks. There are lots of quick cuts combined with some eye-catching slow-motion filming allowing the viewer to savour Donnie’s trademark triple kicks.

The subsequent interspersed action scenes and montages all feature an arm-swinging, light-footed Donnie sprinting into action. Every kicking and punching combination is fired-off like a machine gun landing on their victim like blows from a sledgehammer. For most of the fights, our masked hero has to deal with five or more opponents at once, leading to some creative choreography for Donnie to dish out.

For the finalé Donnie bursts into full-on, fist-clenching, cat-screeching Bruce Lee mode; he even busts out the nunchakus! Taking place in the Japanese dojo, the fight makes several nods to the classic scene in Lee’s “Fist of Fury”. In the final stand-off, we see glimpses of Bruce Lee’s style seamlessly blended with Donnie’s impressive array of jumping kicks.

Donnie gets to show off his authentic skills as a pianist

Even Bruce Lees screeches are included

When this film was first announced I was quite excited at the prospect of Donnie Yen teaming up with the makers of one of my favourite martial arts films, “Fist of Legend”, for a sequel.

In the world of martial arts movies, Bruce Lee’s “Fist of Fury” and Jet Li’s “Fist of Legend” are surely two of the toughest acts to follow. Gordon Chan and Andrew Lau have tried to create something different but “Legend of the Fist” feels like a long and glossy television movie. It features some lush cinematography, flashily edited action sequences and expensive looking sets.

The acting performances are good all round, especially Shu Qi, whose character’s complex circumstances allow her to be so much more than just glamorous eye-candy. Donnie Yen is solid as a dashing Chen Zhen both in terms of acting and action. It’s quite fun to see him impersonate Bruce Lee in the final fight too!

Donnie Yen is solid as a dashing Chen Zhen

Kiki is a nightclub hostess and singer

Can Chen Zhen be broken

The biggest problem with this film is the pacing. The few truly entertaining action scenes are filled in by overlong soap opera-style dramatic ones. Even though the film is only an hour and three quarters long, as the end credits rolled, I thought I had been watching for well over two hours! The muddled plot isn’t sure if it’s a patriotic, flag-waving, historical tale, or a comic book hero’s origin story. Teddy Chen‘s “Bodyguards and Assassins” was much more successful at holding the viewer’s interest whilst delivering a tale of political intrigue that had wide gaps between the action beats. Wilson Yip’s “Ip Man” demonstrated brilliantly how to evenly thread some truly great fight choreography throughout a similar historical plot of Chinese resistance to Japanese occupation.

If you haven’t seen this one, there are three or four entertaining action scenes that will satisfy most Donnie Yen fans, but perhaps have your hand close to the fast forward button when they are over. It’s certainly worth watching for Donnie’s literal Bruce Lee-style furious fists and feet as he rages on through the film’s final fight. 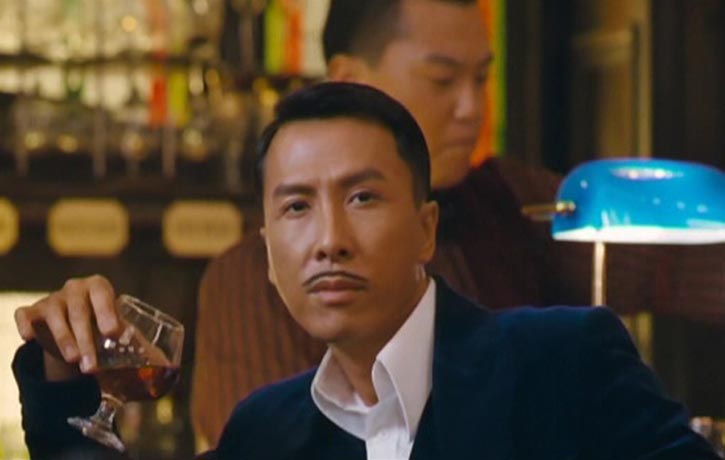 The Chinese helped the Allies during WWI

The mask costume is a tribute to Bruce Lees Kato

Chikaraishi has a personal connection to Chen Zhen