Chinese actor Zhang Hanyu stars as “Gao Gung”, the leader of a crack Chinese Narcotic Task Force. Zhang hit the big time after his lead role in “Assembly” and has played notable roles in Donnie Yen’s “Special I.D.” and “Bodyguards and Assassins”. One of Asia’s hottest talents, Eddie Peng plays “Fang Xinwu”, an undercover intelligence officer, who hides a tragic connection to the gangsters they are pursuing. Peng’s star has risen with his roles in movies such as “Call of Heroes”, “Tai Chi 0”, “Tai Chi Hero”, “Cold War 2” and “Rise of the Legend”.

Thai actor Pawarith Monkolpisit plays the unhinged and dangerously unpredictable drug lord “Naw Khar”. He is probably best known to Western audiences for his role as Kong in “Bangkok Dangerous”. Award winning Chinese actor Chen Baoguo appears as “Minister of Public Security Jiang Haifeng”, who brings in Captain Gao to go undercover. Chen Baoguo has previously appeared on the other side of the law as a Triad Boss in Jackie Chan’s “Rob-B-Hood”.

Following more mature roles in the likes of “Kill Zone 2” and “The White Storm”, action veteran Ken Lo once again proves what a fine character actor he can be in the role of “Mr Jitpong/Xing Deng “, a sleazy and sadistic gangster.

The movie is inspired by real-life events when thirteen Chinese crew members from two cargo ships were murdered by a Myanmar drug-trafficking ring. It was quickly tagged by the media as “The Mekong River Massacre”.

The film takes place in “The Golden Triangle” which is on the borders of Myanmar, Laos and Thailand. It is notorious for piracy and banditry from the violent drug gangs in the region. The Thai government claims to have struck a blow when they proudly announce a huge seizure of drugs from a Chinese boat in a raid that left thirteen Chinese fishermen dead. However, the head of the Chinese Narcotics Task Force, Captain Gao Gang discovers evidence that casts doubt on that version of events.

China leads a joint task force with Thailand, Laos and Myanmar, to eradicate the drug gangs and make the Mekong River safe. Secretly, the Chinese want to be the first to capture the notorious drug lord Naw Khar, and bring him in alive to face justice.

Joining forces with undercover intelligence officer Fang Xinwu, Captain Gao and his team enter a dangerous game to infiltrate Naw Khar’s gang, before other authorities with their own vested interests silence them for good.

Although the film sets the scene for the initial brutal massacre on the Mekong River, it actually leaves it to the audience’s imagination until much later. There is quite a bit of running time spent scene setting and establishing the main characters, including a SWAT team of action film caricatures, all named after Greek Gods. Oh, and a German Shepherd dog called Bingo!

The first proper set piece sees our team infiltrating a notorious gang-controlled part of a Thai town, where metal detectors ensure they cannot bring their guns. When the team’s cover is blown a tense chase ensues as an axe-gang pursue our undercover agents over rooftops and into the street market. When they go hand-to-hand, there is no pretty kung fu moves here, just brutally effective strikes and takedowns. The pursuit builds to a quite literally explosive car chase. Eddie Peng’s undercover agent is chased through a busy train station. He tackles obstacles and train windows park our style, while Zhang Hanyu fights off the axe gang with machine-like efficiency.

My cover is blown

The film’s centerpiece is an exceptionally tense yet exciting set up in a busy shopping mall. There is a bone-crunching stairwell fight whilst the tension is cranked up to the nail-biting maximum between the gangsters and undercover team. It all explodes into a violent shootout in the middle of the busy shopping mall. Eddie Peng handles the Police Story-style fisticuffs while an incredibly-filmed car stunt through the middle of the mall takes place. Peng even gets a Jackie Chan-like moment of dealing with a baby being tossed through the air!

If the first three quarters of the movie is tense gangster flick, the last thirty minutes is an out-and-out Rambo homage. Set in the jungle lair of the drugs gang, the camouflaged Task Force are initially silent and deadly before inevitably, all hell breaks loose. Even Bingo the dog gets in on the action. As you would expect, anything made of wood is machine-gunned into splinters and soldiers are blown acrobatically through the air by hand grenades and mines. Eddie Peng once again demonstrates his aptitude for performing hand-to-hand combat in a gripping knife fight.

Having already used cars, helicopters and trains, Lam concludes the action with a riveting speedboat chase on the Mekong River.

The film ends fittingly with a dedication to the real-life victims of the massacre.

Bingo the Dog is a key member of the team

This film goes out and out Rambo

The incident on which “Operation Mekong” is based, was a sensitive news story sparking outrage among the Chinese public. Even though the movie is only very loosely based on the real events, it has smashed all sorts of box office records in Mainland China and throughout Asia.

Aside from the subject matter, it is an interesting patchwork of action movie tropes for Chinese audiences. There are rooftop chases that you might expect to see in a Jason Bourne movie, elements of the car chases reminded me of Will Smith’s Bad Boys films, and there is a blatant “Deer Hunter” rip off. Although to be fair, Sammo Hung’s “Eastern Condors” drew from the exact same scene! Coincidentally, just like “Eastern Condors”, one of the team also has a pronounced stutter. The whole “undercover cops” thing is portrayed in a very clichéd way and reminded me a little of the movie version of Miami Vice, only less glamorous. 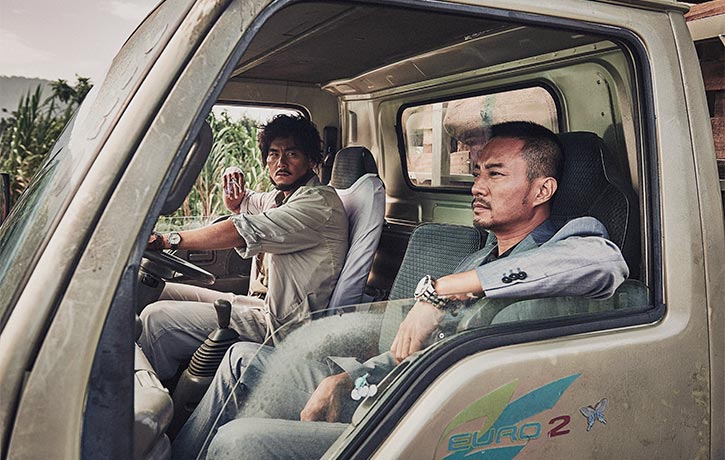 Silent and deadly before all hell breaks loose

Plenty of bang for your buck

However, this is acclaimed Hong Kong director Dante Lam’s version of these clichés. When he does shaky-cam style action, it’s BETTER than Jason Bourne. You can still see what is going on and yet it retains the energy and sense of urgency. The tense shootout in the shopping mall features some of the quick cuts you would expect in a Hollywood action film, but Lam manages to edit and pace the whole sequence so that you never lose track of each strand of the battle, and he still maintains the tension. Throughout the entire movie the camera rarely stops moving. There are some digital effects which in the main are put to good use, especially in the larger explosive set pieces. That’s not to detract from some impressive real explosions.

Following his engaging performance in “Call of Heroes”, Eddie Peng continues to prove he is an actor of many parts. He manages to keep his rather hackneyed role of the “undercover maverick” interesting. Zhang Hanyu is, as you would expect, tough and stoic as the mainland Chinese Captain. Thai actor Pawarith Monkolpisit is appropriately disturbing as the bad guy, although Ken Lo nearly steals the show from him.

I was quite surprised by the amount of English dialogue spoken in the film. Unfortunately, the dialogue is not this movie’s strong point! Even though there is plenty of action, this film is still a tad overlong at just over two hours.

Fang Xinwu and Captain Gao are out for justice

If you enjoy Asian action films such as Johnnie To’s “Drug War”, there are ample gangster chills and explosive action thrills here. If you are looking for plenty of bang for your buck, wrapped up in a tense, uncompromising thriller, look no further.

Teenage Mutant Ninja Turtles: Out of the Shadows (2016)