Yuen Biao plays our hero, Fong Sau-Ching, whilst Yuen Wah takes on the role of the antagonist, Feng San.

Bringing some glamour and humour to the proceedings is Maggie Cheung, who most famously played Jackie Chan’s long-suffering girlfriend in the original three Police Story films.

Yuen Wah is at his most sadistic and villainous 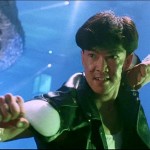 Yuen Biao is ready for action!

When the Emperor’s cousin is killed, he tasks Fong Sau-Ching with hunting down her killer

Feng San steals the mystical Black Jade Buddha that can grant the gift of a hundred lifetimes when used with a Tibetan Timewheel. After a mountain-top battle, the two swordsman fall into the ice, where they are frozen and preserved by the Jade Buddha’s powers. Fast forward to present day China, and a team of scientists find the ancient artefacts along with the frozen warriors. Having been accidentally thawed out my some inept thieves in Hong Kong, Feng San soon comes to realise his skills and power are no match for anyone in the 20th Century, and he proceeds to go on the rampage. Fong Sau-Ching vows to continue his mission to return Feng San to the emperor. However, Fong Sau-Ching, is very confused by modern society, and is tricked into becoming a servant for con-woman/call girl, Polly (Maggie Cheung).

The two soon end up crossing paths with Feng San. In order to spare Polly’s life, Feng San orders Fong Sau-Ching to drink a potion that will eradicate his fighting skills. Fong uses acupuncture to temporarily preserve his powers.

When the Tibetan Timewheel turns up at an exhibition, Feng San plans to use it to travel back in time to the Ming dynasty. With modern-day firearms, he can conquer China, and install himself as emperor. Knowing his foe will head for the Timewheel, Fong Sau-Ching forges himself a sword, and sets out to stop Feng San once and for all.

Using the roof of a Mercedes as a tumble run!

The lead’s technique & timing are incredible!

The final showdown is the highlight of the film

The evil and relentless Feng San

Some of the visual effects are a bit dated!

Over the years, Yuen Biao and Yuen Wah between them have performed some of the most breathtaking fights and acrobatic stunts, in films such as “Knockabout”, “The Prodigal Son”, Eastern Condors, “Righting Wrongs”, “Wheels on Meals”, the “Lucky Stars” films, and even Bruce Lee’s Enter the Dragon.

Although there are only a few action scenes, they are of the highest-calibre of the two lead’s work. Their opening fight highlights their skills with traditional Chinese swords, and, of course, the action is always very frenetic. When Yuen Biao first meets Maggie Cheung, we witness his superb acrobatic skills, as he backflips across the roof of a Mercedes saloon. Later we see him flipping and somersaulting around an office, literally dodging bullets!

Yuen Wah demonstrates he is just as adept when we see his first robbery. He surfs the roofs of cars and jumps from one moving vehicle to another to make his getaway.

A chase through the docks of Hong Kong involving a horse, a jeep and a crane, prove our stars are equally at home with inventive and death-defying stunts. The sequence features very high stunt falls for both actors, one into water, and the other into boxes, that traditional stunt performers would be proud to include in their showreels.

The film climaxes with an extended battle between our hero and villain. Starting with guns, grenades and swords on a rooftop, there are some very obvious references to Russell Mulcahy’s “Highlander”. They soon end up in hand-to-hand combat, demonstrating their incredible timing and technique. Yuen Biao’s intercepting spinning and jumping kicks are spectacular, and you will wonder how they manage to jump and somersault onto each other without breaking their spines and ribs!

Fong Sau-Ching struggles to understand the 20th Century – including the humble WC!

Fong Sau-Ching in hot pursuit through the streets of Hong Kong!

Fong Sau-Ching considers taking a poison to save Polly

Feng San must be stopped at all costs!

Playing like an Eastern mix of “Highlander” and “Demolition Man”, with a touch of “Austin Powers”, “The Iceman Cometh” is an odd but entertaining mix of action and comedy.

The villain’s rather grim crimes of rape and murder, contrast starkly to the film’s rather broad (like most eighties Hong Kong comedy films) humour. Yuen Biao plays the innocent in a world he doesn’t understand with charm, and seeing him trying to figure out a twentieth century bathroom can still raise a laugh. Maggie Cheung, as she has proved many times for Jackie Chan, is a great foil for Yuen Biao to play against, and always handles the comedy well. Yuen Wah makes for a ruthless villain, but plays it relatively straight compared to his turns in Eastern Condors and “Dragons Forever”.

The music seems at odds with the action sequences, and some of the visual effects are laughable, even by the standards of the nineteen-eighties. However, it is the action that provides the real special effects that fans look for in a Hong Kong movie.

Where the film really shines is the end battle between our two stars. The fight sequences are shot wide, so you can really appreciate the action. For some of the more spectacular moves, the viewer is treated to a slow-motion shot, immediately followed by the full speed version. It’s great to see the pure talent of Yuen Biao and Yuen Wah go “mano-a-mano”, uninterrupted by their co-stars, as happens in “Dragons Forever”, for example.

Not as successful or action-packed as something like The Prodigal Son, “The Iceman Cometh” still has it’s funny moments, a couple of great stunt sequences, and is worth watching just to see Yuen Biao and Yuen Wah fight it out at the end.

There is talk of a “Highlander” reboot, and one can only hope the filmmakers look to this type of Hong Kong movie when it comes to the action.

It will be interesting to see how Asian action star Donnie Yen delivers the recent remake “Iceman 3D”, which is being released as two films.

Evenly matched, but who will emerge victorious

Bullet dodging, and some frenetic acrobatic-fu!

A novel method of making your getaway!

A leap of faith into the boxes below

A jumping back kick sends the villain flying

A back somersault kick sends the power powder flying!