Six years is a long time to wait, but at last, The Most Complete Fighter in the World is back for another heart-stopping, pulse-pounding MMA smackdown in “Boyka: Undisputed”, and if there’s one thing every action fan can agree on, it’s that a world without Boyka just isn’t worth living in! Rarely has the question “Was it worth the wait?” been more of the rhetorical variety than when applied to the latest chapter of the “Undisputed” saga. Scott Adkins steps back into his signature role for the third time where the fights are fiercer, the hits harder and the stunts more spectacular, and no doubt to the delight of Bruce Lee, the content is more emotional!

The ever-incredible Scott Adkins once again returns to the role of The Most Complete Fighter in the World, Yuri Boyka and once he steps back into the ring, his is a title that’s certainly hard to dispute. Teodora Duhovnikova portrays Alma, a young woman who becomes the object of Boyka’s protection after a tragedy in the ring befalls her husband Viktor, played by Emilien De Falco. Alma’s menace comes in the form of Russian mob boss Zourab, played by Alon Moni Aboutboul who brings with him an assortment of nefarious henchmen for Boyka to overcome, including his right-hand man Igor Kazmir, played by Brahim Achabbakhe, as well as Boyka’s most challenging foe yet, the hulking behemoth Koshmar, played by the 325lb British bodybuilder, Martyn Ford.

Back in the ring, ding ding!

Since his escape from prison, Yuri Boyka continues to compete in underground fights in Ukraine and is finally on the verge of making it to the big leagues of the MMA world when he receives an offer to compete in a qualifying match that, should he win, will grant him entry into a major upcoming MMA tournament. Boyka wins the fight, but the thrill of his victory is short-lived when he learns that his opponent later died from the pummeling he delivered.

Boyka heads to Russia to seek the forgiveness of the fighter’s widow Alma and soon learns that her husband’s death has condemned her to a life of indentured servitude to local crime boss Zourab, due to the loan her husband took from him to establish a local community centre. Although knowing that he risks being sent back to prison by staying in Russia, Boyka offers to compete in a series of fights for Zourab in order to pay off Alma’s debt.

Boyka wants this fight more than anything

Boyka says keep up your cardio

A crazed psycho Koshmar ready to chew up Boyka

It goes without saying that Scott Adkins can play Boyka in his sleep, but neither he nor the “Undisputed” series have ever been content to rest on their laurels and it shows in what is the undisputed (last time, I promise!) best written film in the franchise. This is truly Boyka like you’ve never seen him before.

Once the hissing, bloodthirsty villain of “Undisputed 2”, he not only becomes the title character of the fourth installment (or third, depending on whether or not you’ve seen the largely overlooked first film) but transitions into something almost resembling a Christ-like figure in just how much he is prepared to sacrifice for the widow of a man who died by his fists. Yeah, about that fight with Viktor – the “Undisputed” series is still delivering in the upper one-percentile of martial arts actionbut the team behind “Boyka: Undisputed” clearly want the audience to feel the impact of this out-of this-world match-up as the lynch pin on which the entire film hinges.

Boyka says BRING IT ON

Boyka defies gravity and his opponent

Pinning his callous foe to the mat

Under the direction of series newcomer Todor Chapkanov (taking the reins from the series’ usual auteur Isaac Florentine who returns here as producer), Scott and Emilien De Falco pull out every last stop and utilize practically every kicking combination imaginable for this fight, easily the most brutal of the film and perhaps of the entire series – no small feat in a film franchise where crippling leg injuries are par for the course. Rest assured, you WILL be experiencing whiplash after Boyka delivers an absolutely crushing finishing strike on his doomed opponent!

Of course, the title of The Most Complete Fighter in the World means nothing if the holder cannot be challenged and in this regard, “Boyka: Undisputed” is thinking five steps ahead. One of the strengths of “Undisputed 3” was Boyka having to work around the knee injury he was saddled with at the end of “Undisputed 2”. The fourth film establishes that Boyka’s largely overcome this problem after having his knee surgically repaired but he faces a whole new challenge after taking a kick in the back during a two-on-one fight and that’s just one of the ways the film tests him to his limits, but then, Boyka’s always liked to live dangerously!

Unleashing a powerful jump spinning back kick on Koshmar 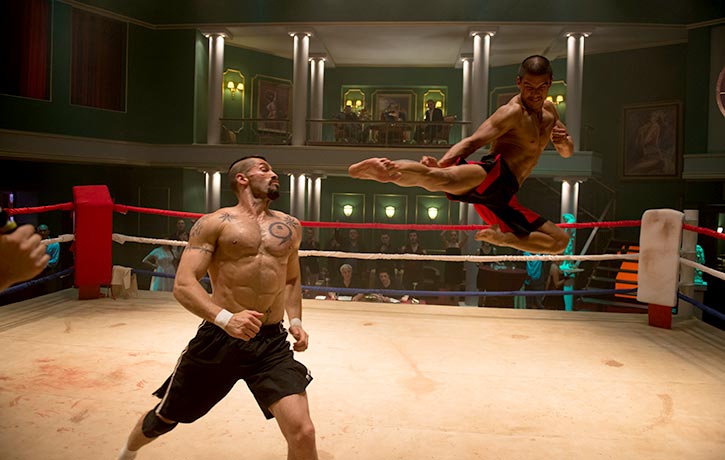 Boyka is jacked for the fight ahead

Where other martial arts films occasionally fall into the trap of failing to give a distinct gimmick or trait to each duel, every successive fight that Boyka takes on to free Alma from Zourab’s clutches comes with its own unique challenge and identity. Everyone will have their personal favourite, but the two-on-one match is certainly a show-stopper (the fact that the lightning fast, veteran stunt man and fight choreographer Tim Man portrays one of Boyka’s foes here probably has something to do with that) and in his subsequent match with Igor Kazmir, Scott pulls out just about the most incredible variant of the Guyver Kick you’ll ever see.

In discussing the film’s finale, I must be extremely blunt – you do not want the last twenty minutes of this film spoiled for you. Obviously, it goes without saying that Boyka’s final duel with the hulking, face-caged psychopath Koshmar is incredible to a ridiculous degree, but it’s the events that come before and after that make what’s happening in the ring something that leaves you on the edge of your seat, genuinely asking how The Most Complete Fighter in the World is going to get out of this. If you thought you were worried for Boyka when he was fighting on a bad knee, you ain’t seen nothing yet!

It’s been a long time coming to see Boyka step back into the ring, but with this great of a payoff, a wait of even ten years would have been well worth it. There just isn’t a better martial arts film series being produced in the English-speaking world right now than the “Undisputed” franchise, and the fourth chapter is both earth-shatteringly awesome and surprisingly emotional in ways that even the most die-hard of fans won’t see coming. Set your expectations as high as you want, “Boyka: Undisputed” is going to exceed them by a mile!

The Most Complete Fighter in the World

Boyka throws everything he’s got at Koshmar

Boyka didn’t see that one coming 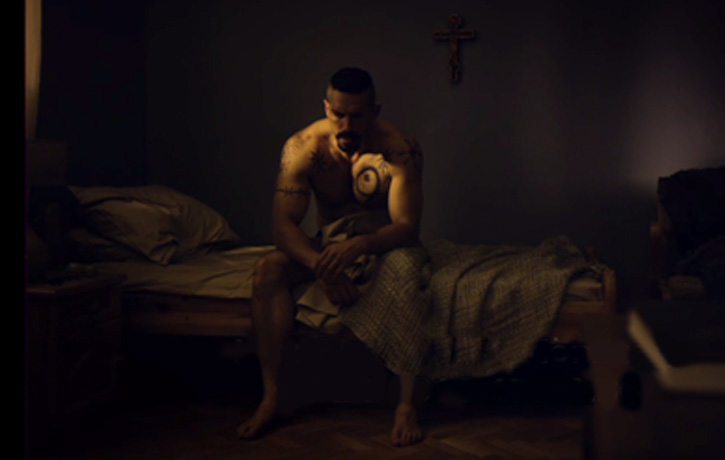 Boyka is haunted by guilt from his last fight

Boyka is caught off guard with a spinning back kick

Zourab sees an opportunity to make a buck off of Boyka

Viktor enters the ring with no fear in his heart

Boyka is determined to atone for the sins of his past

All Boyka wants is Alma’s forgiveness 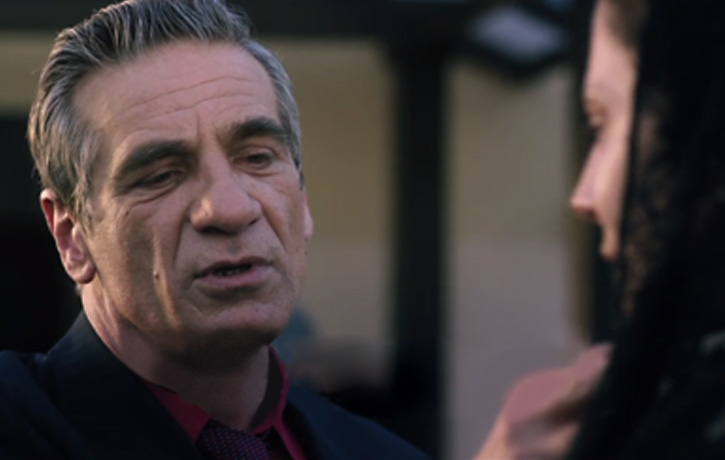 Zourab wastes no time in pouncing on the grieving Alma

Boyka’s learns just how good his next opponent is