For martial arts fans across the world, Scott Adkins needs no introduction. For years, he’s blown action-hungry viewers away in everything from “Doctor Strange” and “The Expendables 2” to the “Ninja” movies and his signature role as Yuri Boyka in the “Undisputed” franchise. However, he’s set to move into some very new territory indeed with the upcoming “Accident Man”.

Based on the eponymous British comic book by created by Pat Mills and Tony Skinner, “Accident Man” follows the story of tough-as-nails assassin Mike Fallon, who earned his nickname through his special talent for making his victims’ deaths look like nothing more than terrible accidents. Having been Scott’s dream project since adolescence, “Accident Man” is set to make its grand debut on February 6th!

Today, Scott sits down with KFK to share the story of turning his passion project into a reality and takes readers behind the scenes of the making of “Accident Man”, along with giving a pinch of info on another action movie ensemble he will soon be seen in, the highly anticipated “Triple Threat”!

Hi Scott, great to be speaking with you again! Hope you’re doing well.

Brill! Well, let’s kick off with how your passion project “Accident Man” first got started? What drew you to the property and made you want to make it into a movie?

Well I read the “Accident Man” comic book as a kid, and I’d always wanted to make it into a film. It’s a very violent comic with a really Devil-may-care attitude and a really dark sense of humour. The character Mike Fallon, is a little like Patrick Bateman of “American Psycho”; he’s very materialistic, and loves what he does as an assassin, and of course, he’s a master of many different martial arts. It was very edgy and quite dark, and it really jumped off the page and made me think it’d make a great movie.

The rights had previously been with some big producers in the past, but they hadn’t managed to get it off the ground. So I managed to get the rights, and wrote the script with my good friend, Stu Small, and I also produced it. We sent the script to Sony and they loved it, which was really great since this was my first time writing a script. Also, films like “Kick-Ass”, “Kingsman“, and “Deadpool” had come out and been really successful, and we pointed out that if those could be “Why are we waiting? These are of the same ilk as ‘Accident Man’!” so persuading a lot of people to move forward with the film.

Mike leaps in with an aerial attack 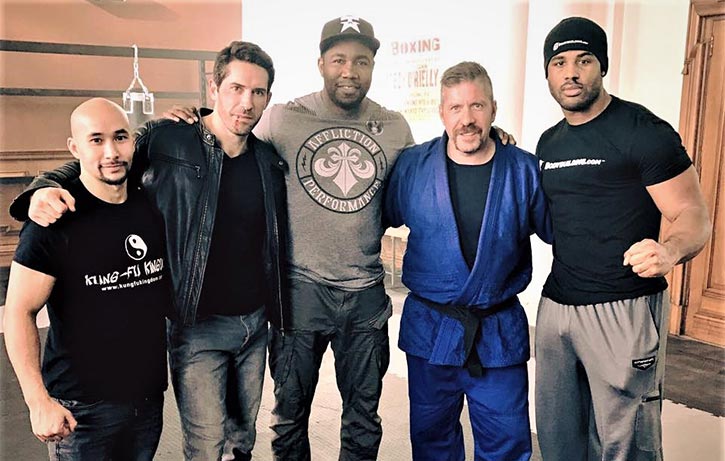 Mike gets the upper hand of his opponent

Yes, “Accident Man” is certainly a kindred spirit of those films! On that note, you’ve got quite an ensemble, with yourself, Michael Jai White, Ray Park, Amy Johnston, Ray Stevenson, David Paymer, and Ashley Greene, as well as having Jesse Johnson directing and Tim Man as fight choreographer. What can you share about putting together such a team for your dream project?

Well, we were very lucky and it’s a testament to the script that we were able to get everybody to sign on for the film. We really wanted to create some colourful, larger than life characters with the film, and with ‘Big Ray’ in particular, we really tried to create a very appealing character that a big name actor would want to portray, which you really need these days to secure the financing for the project. So we were very fortunate that Ray Stevenson signed on for Big Ray, so he came in and did a fantastic job.

Absolutely. So, what were some of the more memorable experiences in the making of the film? Any accidents, man, or mishaps for example?

As far as accidents, none that we didn’t have planned! (Both laugh) I think the most memorable experience in making the film for me was just sitting in the pub ‘The Oasis’ where the assassins congregate, and seeing everyone reading lines and playing characters that you’ve written, which was a new experience for me and a great one. It was just very gratifying to have harboured this dream for so many years, and the feeling of seeing this labour of love finally being realized was the most memorable experience for me.

No doubt about it. Looking ahead now, you’ll also soon be seen in another big ensemble film, the highly anticipated “Triple Threat“, which brings you together with Tony Jaa, Iko Uwais, Tiger Chen, Michael Jai White, Celina Jade, Michael Bisping, and Jeeja Yanin, with Jesse Johnson again directing and Tim Man again handling the fight choreography. What can you share about the making of the massive martial arts ensemble that is “Triple Threat”?

Oh, it was fantastic to work with guys like Iko Uwais and Tiger Chen for the first time, but I’d always had this bee in my bonnet that I’d always wanted to work with Tony Jaa and have a fight with him onscreen. When I was first coming up, Tony was coming up right alongside me, and so I really jumped at the chance to be a part of “Triple Threat” to fulfil that desire of having an onscreen showdown with Tony Jaa. He’s a fantastic, humble man, I had a great time working with him and everyone else on the film, and have to say it was one of my most fun experiences making a movie!

The Accident Man plots his next hit

Mike flees from a ballistic assault

Mike has a tough opponent in Jane the Ripper

Well, we definitely have it on our radar, for sure! Thank you so much for the pleasure of this interview, Scott. Congratulations on realizing your passion project with “Accident Man”, and we greatly look forward to “Triple Threat”, as well!

Thanks Brad, great to speak with Kung Fu Kingdom again!

“Accident Man” is available on Blu-ray and digital (VOD) formats from Tuesday 6, February. Excited to see “Accident Man”? Let us know your impressions in the comments below, join in the conversation on Facebook and follow us on Twitter. (Be sure to also check out our other FU-centric interviews!)