It’s been a long time coming, but the mega-ensemble martial arts fans have been dying for that is “Triple Threat” is finally here, and hot damn, was it worth the wait…Under the direction of stunt veteran Jesse Johnson, “Triple Threat” is an hour and a half of nothing but the purest, meanest, most amazing action you could ask for from a murderer’s row like this – not to mention the wildest finale you’ll lay eyes on all year!

Tony Jaa, Iko Uwais, and Tiger Chen step up to portray the titular heroes of “Triple Threat”, playing Payu, Jaka, and Long Fei respectively, while Scott Adkins assumes the role of the bloodthirsty big boss opposing them, Collins. Our villain is aided by his own team of heavy hitters, including Devereaux, Mook, Joey, Steiner, and Dom, respectively played by Michael Jai White, Jeeja Yanin, Michael Bisping, Ron Smoorenburg, and Dominique Vandenberg. Celina Jade also steps into the role of Chinese industrialist Xian, who becomes a target for the villains, while Hong Kong movie veteran, Michael Wong, appears as an old ally of Payu’s who offers assistance to our heroes at a critical juncture. 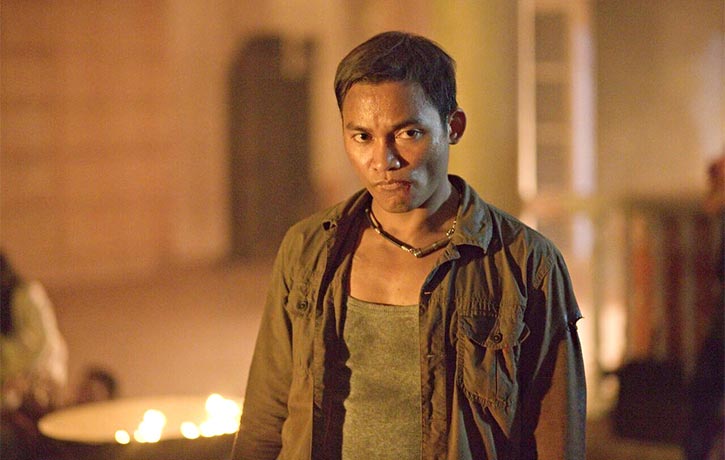 Long Fei is an expert navigator

Devereaux is suspicious of Jaka

Payu and Long Fei thought they were just going on their next job as mercenaries when they were hired to assist in the rescue of Collins, the imprisoned leader of another team of soldiers for hire, from a village in the jungles of Thailand. However, the two are swiftly betrayed and left for dead by their former allies, the duo rescuing the remaining villagers and narrowly escaping with their lives before the village is blown to kingdom come.

Just days later, the two are confronted in an underground Muay Thai ring by the vengeful Jaka, whose wife was killed in the destruction of the village. As Jaka comes to realize the trio share a common enemy, Collins and his team embark on their next mission of taking out Chinese billionaire philanthropist Xian, whose humanitarian work threatens to put an end to the activities of the shadowy Asian crime boss employing Collins’ team.

Payu flies in with a Superman punch

Collins leads his team on their latest covert mission

Our heroes find themselves opposed by these villainous heavies

While Payu and Long Fei set out to rescue Xian, Jaka forms a tenuous alliance with the duo, pulling strings behind the scenes to aid their mission and enact his vengeance on his wife’s killers.

To say that action aficionados have been waiting with baited breath for “Triple Threat” would be an understatement. Indeed, the film’s first trailer, released in July 2017, had fans marking their calendars for a 2018 release (and earning it the number one spot on KFK’s Most Anticipated list of that year). For anyone going into “Triple Threat” with any lingering fear that it would not be worth the wait, allow these words to be the final nail in that coffin – “Triple Threat” is the pulse-pounding, explosion-filled, action-packed smackdown of martial arts supremacy to beat in 2019!

Jaka leaps in to assault

Collins keen to get things moving

In its entire 96-minute running time, “Triple Threat” sets aside MAYBE 10 of those minutes to take a breather here and there, and even then, its periodical moments of downtime are miniscule. From the opening raid on the village in rural Thailand, there’s little doubt that “Triple Threat” is going to loosen its grip on you without giving you your money’s worth and then some. And it wastes no time at all in rectifying the biggest complaint of the otherwise solid “Man of Tai Chi” – the fight many have been waiting for: Iko Uwais vs Tiger Chen.

Just to see the two properly go head-to-head is enough to recommend “Triple Threat”, and rest assured, Iko and Tiger do not disappoint. While the film’s massive ensemble is never less than a thrill to see in together in action, Jaka and Collins (Iko and Scott) prove to be the standouts among the respective teams of heroes and villains.

After learning the truth about his wife’s killers, Jaka takes an almost ritualized approach to his vengeance, and emerges as something of a puppet master, steering both his enemies and his allies to be right where he wants when he wants, much to the chagrin of the latter, and the suspicious Devereaux (the distrustful banter between Iko Uwais and Michael Jai White is just another of the film’s highlights). Meanwhile, in his performance as the thoroughly vicious Collins, Scott Adkins not only brings into clear focus just how good he is at playing outright villainous characters, but also how infrequently he’s gotten the chance to do so. He’s certainly no stranger to channelling anti-heroes with a grey morality, but with Collins, he completely throws caution to the wind as a man with an unbridled sadism, and “Triple Threat” is all the better for having a villain who loves being a bad guy as much as Collins does.

Working together Tony Tiger and Iko bring on Triple trouble

Jaka gives Long Fei a run for his money

“Triple Threat” doesn’t waste a second in giving the audience what they came for in spades. Indeed, it’s not an unfair analysis to set the first hour of the film and its third act in two separate corners, and pin down your favourite parts of the former on its own, due to just how much the finale delivers (more on that in a moment).

Whether it’s Tony Jaa going to toe-to-toe with Ron Smoorenburg, or Iko Uwais throwing down with Jeeja Yanin, the first two-thirds of “Triple Threat” are a glorious montage pitting action stars against one another. However, for as endlessly gripping and explosively visceral as that first hour is, the finale of “Triple Threat” is a true sight to behold, and a showdown for the ages.

Our titular heroes come together against their adversaries in a last stand of warriors that martial arts movie lovers will be raving about for years to come. What makes it that much sweeter is the obvious effort to give a clear distinction between our heroes respective fighting styles, whether its Payu’s bone-splitting Muay Thai, Jaka’s elusive Silat, or Long Fei’s graceful Kung Fu. Not to be outdone, our villains more than hold their own, with the cool and collected Devereaux finally unleashing his inner beast while Joey throws down the gauntlet like a punch-drunk bouncer, and Michael Bisping really getting the chance to strut his stuff after being relatively underutilized in “xXx: Return of Xander Cage”.

Jaka mistakenly thinks his score must be settled with Long Fei

Jaka schemes his next move

Xians humanitarian work makes her a target for Collins team

Meanwhile, the leader of the pack, Collins, cuts loose with an utter absence of mercy that will leave viewers begging for Scott Adkins to step back into the villain’s chair in the future. They say the best should always be saved for last, and make no mistake “Triple Threat” does exactly that and with an hour’s exhilarating build-up already under its belt – let’s just say you’re in for one hell of an action ride, a triple trippin’ treat!

If it’s action-packed insanity you crave, “Triple Threat” is nothing short of an all-you-can-eat buffet. It’s just the kind of movie the term “non-stop action” was invented for, and the revved up tension it takes into a finale of such glorious butt-kicking is immensely satisfying. For action fanatics, “Triple Threat” is the movie to beat in 2019, and Jesse Johnson’s best directorial effort to date – DO. NOT. MISS. IT!!

The Triple Threat take a breath after a tough battle 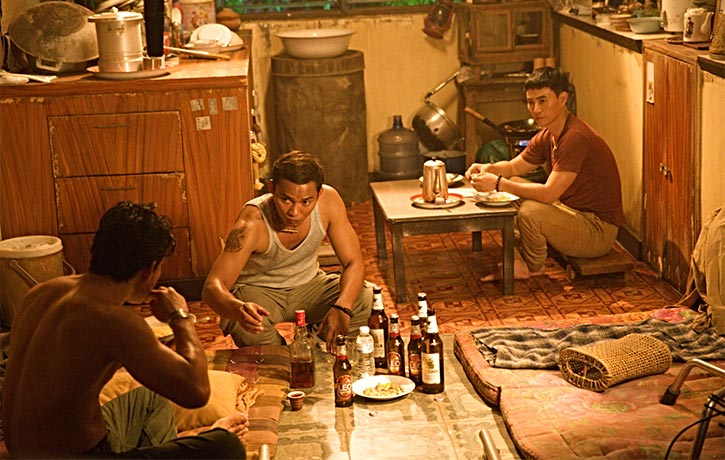 “Triple Threat” arrives in theaters on March 19th, and Video on Demand platforms on March 22nd courtesy of Well Go USA. What are your impressions of “Triple Threat” so far? Which other action stars would you like to see go toe-to-toe, head-to-head or team up in the future? Let us know in the comments below; Like, share and join in the conversation on Facebook and follow us on Twitter & Instagram. Get into a whole lot more Triple Trouble, trippin’ and clickin’ with KFK’s Top 10’s, interview exclusives, giveaways and subscribe for videos too!