Jackie Chan and Sammo Hung flex their acting muscles in a touching drama co-directed by Sammo himself, with action direction from Yuen Biao.

The cast list for this film reads like something of a reunion for five of the famous Seven Little Fortunes, the famous Chinese Opera Troupe that gave the world so many Hong Kong action legends.

Topping the bill is Jackie Chan, who by this time was the number one box office star in Hong Kong. He plays “Ted/Tat Fung”, a Hong Kong CID officer who is trying to juggle his career, his girlfriend “Jenny”, played by Emily Chu, and looking after his mentally challenged older brother “Danny/Do-Do Fung”, who is played by Sammo Hung. 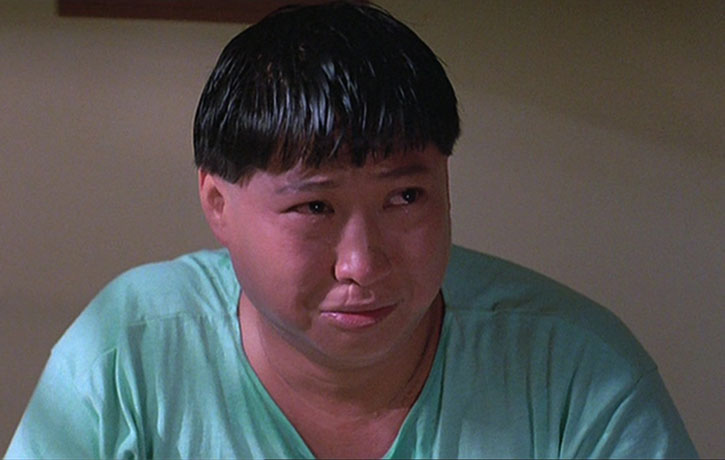 Sammo gives a performance of great depth and emotion

Playing the bad guys are five of the best in the business. Veteran of the Bruce Lee movies The Big Boss and Fist of Fury, James Tien stars as Triad gang boss “Mr Kim”. Making up his team of henchmen are Project A villain Dick Wei, Encounters of the Spooky Kind priest Chung Fat, prolific actor and director Phillip Ko-fei, and Kao Sau-leung, better known as Blackie Ko, who is considered Asia’s greatest automotive stuntman. Best known for his starring role in A Chinese Ghost Story, popular character actor Wu Ma makes a cameo appearance as a restaurant owner.

Ted is a tough Hong Kong CID Officer who dreams of escaping to a life at sea, sailing around the world. Unfortunately, he has to care for his mentally-challenged brother, Danny who is often taken advantage of and gets into trouble. At the same time, Ted is trying to balance his relationship with his girlfriend Jenny. Although he resents the situations Danny puts him in, Ted ultimately cares deeply for his brother.

When Danny inadvertently gets involved with some stolen loot, Ted tries to clear his name. Triad gangsters kidnap the simple and unassuming Danny forcing Ted to put his career on the line as he chooses devotion to his brother over duty to his job.

Wu Ma has a cameo

Chung Fat acquits himself well in the action

The movie opens with a jungle assault. Jackie and his team, clad in bright yellow tracksuits, make their way through the foliage mercilessly machine gunning down a Hong Kong police tactical unit. Jackie confronts Lam Ching-ying, the leader of the unit, in a hard and fast fight. Jackie gains the upper hand and it is revealed the whole thing is just a training exercise between rival police units.

When we are introduced to Sammo Hung, his character is simple, child-like and naive. Some children trick him into taking them to a restaurant, who then run for it leaving Sammo to pick up the bill. The restaurant management take a very dim view when Sammo can’t pay, and start to beat him. In any other film, Sammo would make short work of them, but this is Sammo like you have never seen him before. His character has no fighting ability and he has to use his sheer size to push through his attackers and escape.

With the introduction of the Triad gangsters around an hour into the movie, we start to move more into crime thriller territory. Chung Fat gets into a decent fight and stunt sequence with Dick Wei in a restaurant. It’s a scene that you would normally expect Jackie himself to perform, but Chung Fat does equally well. 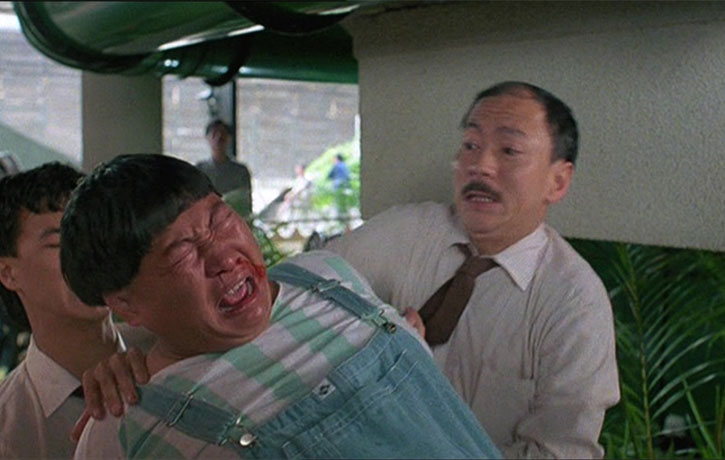 Normally Sammo would make short work of this lot 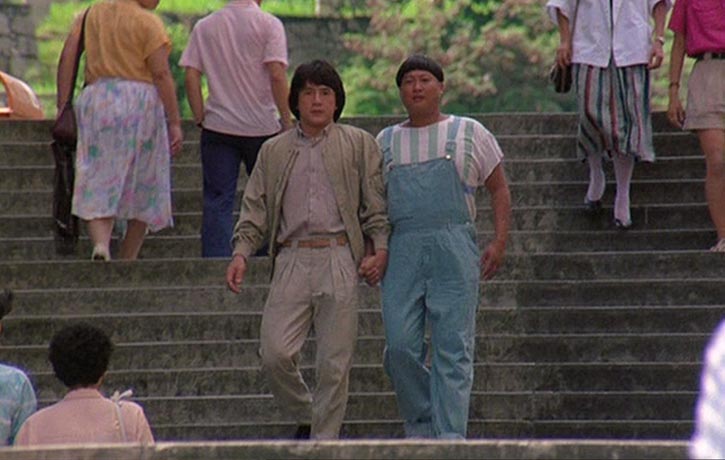 Its quite startling to see Jackie play such a dramatic character 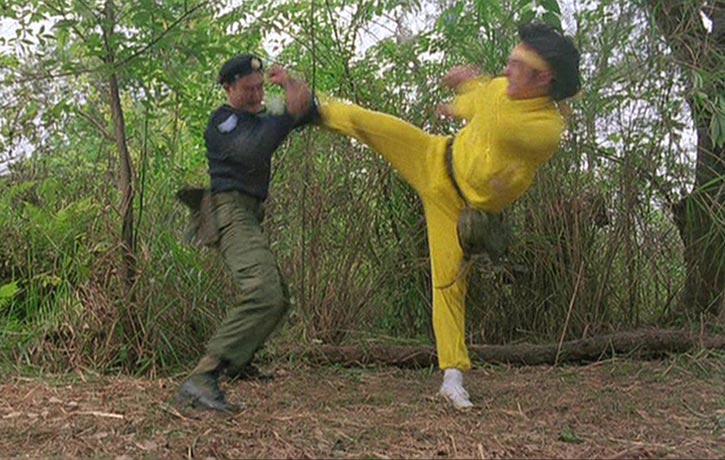 Lam Ching Ying has a rare fight with Jackie Chan

Although it feels a little out of place, Kao Sau-leung co-ordinates a thrilling car chase. As is common in his action sequences, it features some impressive motorcycle and car leaps that Evel Knievel himself would be proud of.

It leads to a tense finalé on an expansive, multi-storey construction site. Featuring most of the main cast, the action progresses from cops-and-robbers’ shootouts to brutal and intense martial arts sequences. Jackie in particular has some of the hardest-edged fights he has ever committed to screen.

To wrap up the action, there is an explosive and astonishing high falling stunt as 8 stuntmen fall from at least 5 storeys up.

If you can get hold of the Hong Kong Legends DVD or Japanese uncut version of the movie, there are a couple of very good additional fight scenes. Jackie has a hard-hitting brawl in a methadone clinic, and there is a multi-assailant brawl in an open-air car park. 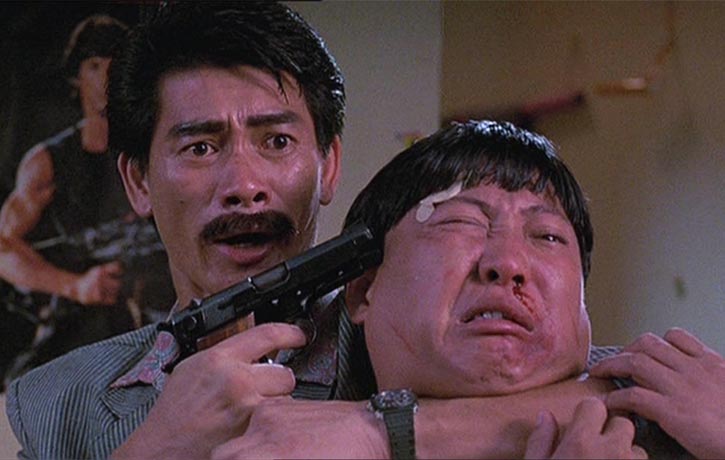 Evel Knievel would be proud of this stunt

I had been dissuaded by some of my peers back in the day from watching this film properly. They considered it “boring” and “rubbish apart from a couple of fights”. So, I had only ever seen this on VHS with one of them who just fast forwarded to the action scenes. Catching up with this film older, and hopefully a bit wiser, I realised how naive they were.

This is actually a very good and touching dramatic movie about the difficult yet brotherly relationship between Jackie’s and Sammo’s characters. It no doubt helps that they have had a very brotherly existence together in real-life. Although this came out three years before the Oscar-winning Hollywood hit “Rain Main” starring Tom Cruise and Dustin Hoffman, you can easily draw some parallels. As is common in many Hong Kong films the drama can occasionally overflow into melodrama. But where Jackie and Sammo are concerned, they deliver the most tender and touching performances of their careers. Sammo brings a genteel and childlike innocence to his character, and you can feel Jackie’s love for his brother even though he struggles with the difficulty of his situation.

For action fans, the film turns on the hour mark and becomes a much more conventional cops and gangsters thriller. It delivers an exciting car chase followed by some of the most kinetic yet brutal action you will see Jackie Chan perform with some of the top movie fighting talents in the business, not least Dick Wei.

The end fight is one of Jackies most brutal

The action opens with a jungle assault

Dick Wei faces off with Jackie

It can be a little startling for fans of Jackie and Sammo to see them playing completely different characters to the lighter ones we are used to. It can be quite jarring at first, and I completely understand why some fans didn’t take to this movie. But stick with it and you will be rewarded with a couple of the best acting performances of their careers topped off with one of Jackie’s best fighting finales.