Wesley Snipes grabs the opportunity to break away from playing drug dealers and gangsters to become an instant action star in this classic nineties “Die Hard on a Plane” variant!

Wesley Snipes stars as “John Cutter”, a former cop turned airline security expert haunted by the death of his wife. The role was an opportunity for the real-life martial arts practitioner to showcase some of his fighting skills on the big screen.

English actor and RADA graduate Bruce Payne stars as the sadistic international terrorist mastermind “Charles Rane”, whose team hijack a jet to aid his escape from custody. Best known for playing villains, he is also well known for his role as “Jacob Kell” in the movie “Highlander: Endgame”, which featured action choreography from Donnie Yen.

Actress Alex Datcher plays “Marti Slayton”, a flight attendant on board the jet, who gets off on the wrong foot with Cutter. She would go on to appear in “Rage of Honour”, starring Cynthia Rothrock and Richard Norton, and also “The Expert”, starring Jeff Speakman of “Perfect Weapon” fame.

Tom Sizemore appears as “Sly Delvecchio”, John Cutter’s old friend who offers him the top job as the head of airline security. Although often praised for his acting performances, Sizemore’s career has been dogged by scandals in his personal life. In an early film role, English actress and model Elizabeth Hurley stars as “Sabrina Ritchie”, Rane’s henchwoman, who poses as a flight attendant. 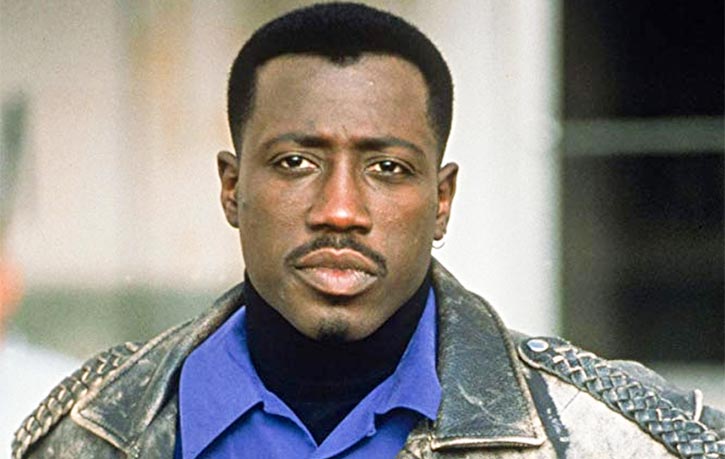 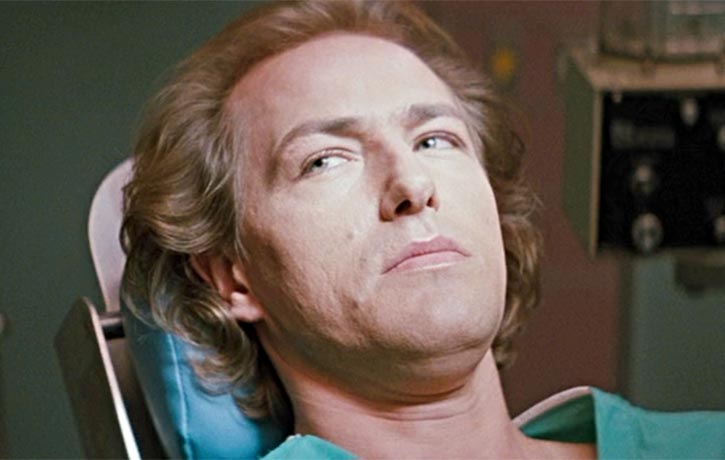 Featuring in supporting roles as Rane’s henchmen are Michael Horse as “Forget”, and Marc Macaulay, who also played a terrorist in “No Retreat, No Surrender 3: Blood Brothers”, as “Vincent”.

Charles Rane, a sadistic international terrorist known as “The Rane of Terror”, is captured by the FBI. He is to be transported to California by passenger jet for trial, where it is likely he will receive the death penalty.

John Cutter is a former cop who is haunted by a tragic incident that led to the death of his wife. Now operating as a security consultant, his friend Sly Delvecchio offers Cutter the Vice Presidency of a new anti-terrorism unit for his company, Atlantic International Airlines. Flying to Los Angeles to accept the job, Cutter boards the plane as Passenger 57. Unbeknownst to him it is the same flight that is transporting Charles Rane.

Rane’s team of loyal and ruthless terrorists hijack the plane, but Cutter’s intervention forces them to land at a small Louisiana airfield. With the local authorities misled by Rane about Cutter’s true identity, he is on his own and must break all his own rules to save the hostages and stop Rane from escaping.

Passenger 57 is a quick but thoroughly entertaining action fix

The stars insisted on performing the fights themselves

The opening titles and funky but brooding theme tune set the mood for what was one of many “Die Hard on a [insert location of your choice]” style action films that came out in the early 1990’s. The opening scenes quickly establish our main players. Bruce Payne as the psychotic terrorist Charles Rane is cold as ice, insisting he doesn’t want any anaesthetic for his impending surgical procedure. It leads to an escape attempt which helps demonstrate just how unhinged, yet athletic and determined this particular movie villain is. Payne performs a lot of the action himself and looks physically imposing, although he is doubled for the more dangerous and highly impressive stunts.

Wesley Snipes’ introduction is a little more complex. A mock hijack instruction exercise presents him as a serious if slightly grouchy security expert. A brief workout scene illustrates Snipes’ outstanding physicality. It is interspersed with flashbacks of a robbery gone wrong that goes a little way to explaining his strict attitude to security matters and grumpy demeanour.

As all our characters board the aircraft, it can be quite fun playing “Spot the clichéd hijacker”! When the hijack begins, the character of Cutter not only demonstrates his ingenuity in alerting the authorities, but also some slick disarming skills. He even incorporates a toilet into disabling a hijacker. Having instantly made an enemy of the ruthless Charles Rane, it is not long before Cutter is fighting off a knife-wielding assailant. Snipes is no slouch and his real life martial arts training is put to good use allowing him to perform the choreographed fight himself. In among the high kicks are some nice hand-to-hand defences and counter elbow strikes.

The mix of Snipes’ tough fighting style and the impressive stunts and falls continue as Cutter and Rane negotiate a traditional country fairground, that provides us with fights on a Ferris wheel and a carousel.

With the action returning to the hijacked aircraft for the finale, an unarmed Cutter fights his way to a confrontation with Rane. There were no stunt doubles used for the final fight between Cutter and Rane. Wesley Snipes and Bruce Payne insisted on doing the scene themselves despite the protests of the producers, but director Kevin Hooks also insisted. It is a credit to the lead actors that you can feel every bruising punch and thudding kick. Seeing the actual lead actors rather than stunt doubles only heightens the tension, as they battle their way through a rapidly depressurising plane.

Snipes gets to perform his real life fighting skills 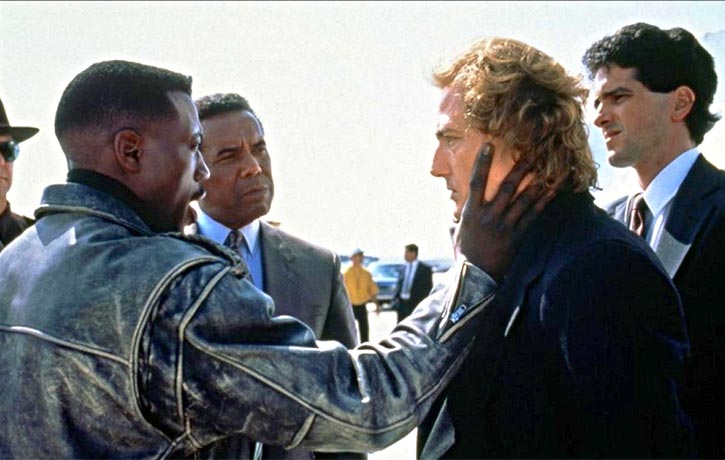 Wesley goes for the hands on approach

This could have been a very average, by-the-numbers, early nineties action movie. What elevates it above run-of-the-mill stock are the performances of Snipes and Payne, who make a clichéd plot and dialogue, sharp, slick and humorous.

Bruce Payne is especially ruthless, as he utters every syllable of every line with the ice cold precision of a hijacking Hannibal Lecter. His equally chilly, piercing stare gives him a real menace as he remorselessly ends his victims’ lives. Equally, Wesley Snipes takes the clichéd hero character of “the good man in the wrong place at the wrong time”, and makes it his own, much like Bruce Willis did as “John McClane”. Although not an out-and-out martial arts movie, it’s great to see a pre-Blade Snipes performing much of the action himself, making his character even more entertaining to watch. The work of the accompanying stunt team is also top notch with some terrific high falls, and leaps and transfers at high speed from cars to jet aircraft!

Not one scene is superfluous so everything whips along nicely in the film’s economical 84-minute running time. It’s a shame the character of John Cutter was never revived as, I for one, would like to have seen his further adventures. Perhaps in an age where stars such as Arnold Schwarzenegger is returning as the Terminator and Sylvester Stallone is reviving Rambo, could we not see Liz Hurley’s character being paroled, looking for revenge on a grizzled, older John Cutter? If you are looking for a quick but thoroughly entertaining action fix, “Passenger 57” ticks all the boxes!

There are some top notch stunts

Cutter must break all his own rules to save the hostages

Getting up close and personal

The terrorists hijack a fairground

Difficult to believe that 27 years have, ahem, flown by since “Passenger 57” was first released! Was this among your favourite of Wesley Snipes’ action films, and what was his best ever fight scene in your opinion? Did you equally enjoy on-transport actioners “Under Siege” with Steven Seagal or “Speed” starring Keanu Reeves? Let us know in the comments below join in the conversation on Facebook and follow us on Twitter and Instagram. (Click through for more Flights of FU; check out these Top 10’s, exclusive interviews and subscribe for YouTube for videos, too!) Check out KFK’s official store for men and women’s wear; t-shirts, hoodies, phone cases, home goods (there’s even a duvet if you live, breathe and sleep martial arts) and more!