We take a look at a comparatively rare movie that has largely gone unnoticed in the canon of action movies, it’s one of those hidden gems with an air of mystique surrounding it…

Our story begins in 1934 Seoul, South Korea. The Japanese military has occupied the country and our heroes and heroine are having a picnic. When a group of Japanese people start to hassle them and those around them, trouble ensues as they cannot keep their hands to themselves. Starting a scrap, the Japs are beaten, however, during this confrontation, one of the trio drops a form of I.D. now we see how a small altercation can turn deadly! Nora Miao stars as Ying and Whang Ing-Sik plays Elder a.k.a Senior Instructor. Here we see the two sparring against each other. Ying is clearly no match for Elder, but uses her wits to escape a serious put down. Sammo Hung (Fan Wei) and a young Carter Wong (Chang) enter the Hapkido school, just as real life Grand Master, Ji Han Jae, has some words of advice for Ying. With all three in the presence of the Grand Master, he asks them to follow him inside for an announcement he must make.

Now, he asks Wei and Ying to demonstrate board breaking. Whang Ing-Sik is impressive! Angela Miao impresses also with a double spin-kick break at two different heights! From here the Grand Master lays some knowledge down before he himself begins to demonstrate!

Movie aside, for one moment, this feels like a private lesson in the art of Hapkido with REAL LIFE practitioner-Grand Master Ji Han Jae! I will not elaborate on it here as I feel this is something you should see and learn for yourself. I will say though, that Grand Master Ji Han Jae makes it look effortless, with some really smooth moves and footwork transitions. He is definitely a real master!

Elder and Ying go at it 1 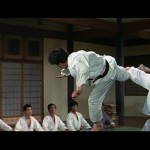 Now he has his final words for the three. He gives them all a gi (training suit) and tells them that they must forbear any situation against the Japanese. He also says that you must respect all other martial arts and pay all the local schools a visit, out of respect. With this message and his well wishes the three head off to return to China. Ying and Chang both travel separately to different schools, to pay their respects when they arrive back in China. Chang is told not to offend the Japanese run Black Bear School. After going to the Shaolin Boxing School, Fan Wei (Sammo), heads to the local restaurant with the school’s teacher, Tiger. Here they see a pair of loud, raucous men, who decide to leave the restaurant without paying their bill. Hitting the owner and knocking him over, they take their leave…only to return moments later. When a lovely young lady enters to buy some take away items, she is groped and harassed by one of them. Tiger leaps to her defence. However he is no match for the loud mouth of the two and is defeated. Fan Wei leaps to his new friend’s aid, remembering then that he has to forbear… Tiger questions his use as a martial arts practitioner, before resuming his quest to beat-up the two drunks. He shouldn’t have bothered! Fan Wei can no longer hold back and takes them both out with solid moves. As they pick themselves up, they tell him that they are from the Black Bear School and dare him to tell them who he is. He does so telling them, “I am Fan Wei, from Eagle School of Hapkido, Chang Zhou”. It is now that Fan Wei has set-up a rude awakening for himself…and the others!

Our opening action takes place at the Hapkido school with all three of our heroes. After sparring with Elder (see above) we see Angela Miao, Whang Ing-Sik and Sammo Hung all partake in some fine demonstrations!

Much later on, we see Fan Wei come across the same trouble makers as before, who are terrorising the local market traders in a despicable manner. Fan Wei gets stuck-in and takes on multiple attackers this time. Sammo Hung is fast and ferocious with a diverse array of hand techniques, but also powerful kicks when the opportunity arises. Good solid performance!

Chang has to climb a mountain 5

In the next scene we finally get to see Chang (Carter Wong) get involved in a real fight. Here he has a real test, he has to fight hand-to-hand as well as against Japanese swordsmen. With victory seemingly on the horizon, he is stopped short on his travels as reinforcements arrive. Taking on all-comers in a very Fist Of Furyesque way, Chang proves his adeptship. Now comes the final gauntlet challenge…will he pass the final test?

Nora Miao steps into the ring now, after being insulted by the Japanese boss, she takes on a fellow Hapkido practitioner who has joined the Japs. Nora Miao does brilliantly in taking on this guy who has a sword versus her metal rod. She shows her resourcefulness when she picks up and uses an umbrella!

Fan Wei has his hands full as trouble has now come looking for him. Sammo is great in dealing with his enemies. My favourite is when he deals with the gang on top of a staircase –this is an early look at what would become a trademark in Sammo Hung action cinema!

Nora Miao returns to the school to deliver some rough justice after their treatment of Fan Wei. The action here is very similiar to Chang’s encounter, however it is clear that she has great talent. At night she must take them on again, this time she is even more brutal with kicks to joints, round-house sweeps and stomps. No wonder she was known as the female Bruce Lee!

Life out for this traitor 9

Elder powers on through 10

A costly mistake for Ying 12

Finally we have the second appearance of Whang Ing-Sik as Elder. Travelling to their aid he wastes no time in showing what he is made of. For me he is the best fighter in the movie without a doubt! His kicking abilities are awesome, well timed and aggressive! Angela Miao resumes her tango with the Japanese fighter from before. She struggles but has a unique way of evening the odds…! Elder now returns for the boss and I have to confess, Whang Ing-Sik is extraordinary, a martial psycho! Watching him deliver kicks with such natural ease is like watching a classical artist with a paintbrush, it’s seamless, effortless! Great ending and substantial, satisfying performances all round from the cast!

This is a rare movie, one you really should see! Grand Master Ji Han Jae gives a master class on the art. That alone, although brief, is a very good reason to watch this film. Sammo Hung appears in his second movie, also, cameos from Jackie Chan and Yuen Biao as young fresh faced actors. Whang-Ing Sik displays a mesmerizing kicking showcase…what more could you want? If you’re a fan of the genre, check out this mystery-gem that is…Hapkido!

Amardeep Sidhu is a (very!) long time martial arts movie fan. On watching "Enter The Dragon", at five years old, became fascinated with Bruce Lee and by eight was hooked on the main man (Jackie) CHAN's movies! He has studied Taekwondo as his primary base, as well as mixed shaolin kung-fu, southern praying mantis, wing chun and capoeira. He is a keen movie watcher with a serious appreciation for fight choreography!