The dawn of the 21st century would see Thailand become an international player for fans of hard-hitting action like the nation had never seen before.

Ask any fan of Thai action movies to give a list of their top ten, and 2008’s hardcore “Chocolate” will doubtlessly be among them. Jeeja Yanin may have been a newcomer at the time, but audiences around the world were instantly won over by her heart-warming portrayal of a young woman afflicted with austim who unexpectedly turns herself into a fighting machine, and single-handedly tangles with every gangster in Bangkok to defend her beloved family.

Jeeja would continue to astonish viewers with her subsequent appearances in such action hits as “Raging Phoenix”, “This Girl is Badass”, “Never Back Down: No Surrender”, and  Tom Yum Goong 2. Most recently, she would also come aboard the heavily anticipated martial arts action ensemble, “Triple Threat” – alongside such distinguished names of martial arts royalty as Tony Jaa, Iko Uwais, Tiger Chen, Scott Adkins, Michael Jai White, Celina Jade, Michael Bisping, and Ron Smoorenburg.

Today, Jeeja sits down with KFK to share a look back at her beginnings in martial arts, along with trip down memory lane to her breakout appearance in “Chocolate”, as well as sharing a peek behind the scenes on the making of “Triple Threat”!

Welcome to Kung Fu Kingdom. Great to connect with you and we hope you’re doing well. Thanks for taking some time out to speak with us today.

Hi Brad, I’m doing great, thanks for having me.

Super. Before we begin, what do you think of the name Kung Fu Kingdom (KFK)?

Thank you! Okay, so let’s go ahead and start out with your beginnings in martial arts. What different disciplines have you trained in?

I started when I was very young. I took ballet for about eight years, and then went into Taekwondo, and I reached my second dan black belt at age thirteen. As of now, my son hasn’t quite gotten into martial arts yet, but I am encouraging him!

Great. On that note, who would you say have most influenced you in the martial arts?

I would definitely say Bruce Lee, and I’ve learned a lot training with Tony Jaa, as well.

On “Chocolate” & Her Other Films

Undoubtedly. So, looking back at the beginning of your career, you started out in the Thai film industry with 2008’s “Chocolate”. Thinking some eleven years back, what memories stand out most for you? Is there any possibility of a “Chocolate 2”?

I had always wanted to break into the film industry, and that proved to be my big break. I don’t think there will be a “Chocolate 2”, but looking back on being a part of “Chocolate”, that was a really exciting time in my life.

Jeeja gets early to rise and kickoff 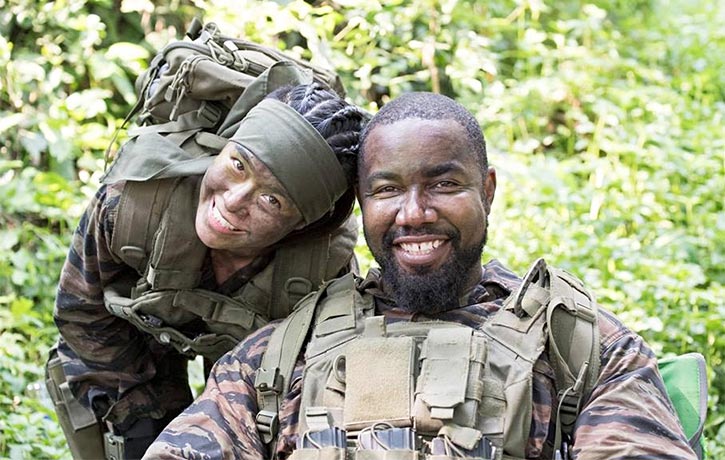 Jeeja with Michael Jai White on the set of Triple Threat

Can imagine! After the release of “Chocolate”, you subsequently appeared in the action-packed surprise that was “Raging Phoenix”. How was your experience of making the film with renowned stuntman-actor Kazu Patrick Tang?

Kazu is a fantastic stunt guy and a really nice person. We had a lot of fun working together on “Raging Phoenix”, and it was a great experience to reunite with him again on “Triple Threat”.

Definitely, Kazu’s got quite the track record. Looking ahead, you would later appear with Tony Jaa and Marrese Crump in 2013’s “Tom Yum Goong 2”. How was your experience of making the film with them?

Jeeja gives her enemy the big elbow in Chocolate

Jeeja strikes knees at the gym

Well, Jaa and I know each other well and I’ve always enjoyed working with him. It was another great experience making “Tom Yum Goong 2”, but I did feel however that some of the CGI and editing on the film could have been done a little better.

Well said. Thai action films often have long, complex, physically demanding takes. What’s the most challenging scene you’ve filmed? Which injuries have impacted you the most and how have you worked around them?

I’d definitely have to say the jump split onto the cabinet in “Chocolate” was the hardest stunt I’ve ever done. It required more takes than I can count, and I was sore for days.

Jeeja ready for war in Chocolate

Jeeja flies into the fight in Chocolate

On “Triple Threat” & Next Projects…

Well, it was a show-stopping stunt, and the scene speaks for itself! Okay, zooming ahead, you can currently be seen in the exciting martial arts ensemble thriller “Triple Threat” appearing alongside Iko Uwais, Tiger Chen, Scott Adkins, Michael Jai White, Celina Jade, Michael Bisping, and Ron Smoorenburg. What can you share about the making of “Triple Threat” alongside these martial arts action stars, under the direction of Jesse V. Johnson and action director Tim Man?

It was a fantastic experience to be a part of “Triple Threat”. I am friends with Michael Jai White and Celina, so that was automatically fun. And I had worked with Scott before as well, he is a really good martial artist.

Tim works really hard, and he did a  great job with the choreography. Jesse is also a very hands-on director and I enjoyed working with him. I also really enjoyed getting to know Michael Bisping and Iko Uwais, they were always making me laugh on the set.

In terms of stunts, I didn’t have anything really challenging like the jump split to do on “Triple Threat”, but of course, I had a cool fight with Iko.

Indeed! So, what other projects do you have planned after “Triple Threat”, and for 2019?

I am currently doing some television work here in Thailand. I’ve also auditioned for a couple of films in the U.S., and I’m waiting to see what happens with those.

Jeeja gets her kicks on point

Hope those pan out well for you, keep us posted! Looking at training now, how much time do you spend training each day or week, and what kind of training do you do to perform at your best?

I train for around two hours a day, and it’s a mix of martial arts and flexibility. I also like dance, as well, as it keeps you on your toes.

Certainly does! What kind of diet, if any, do you follow?

Omnivorous, I see. Looking at fun and leisure now, what are Jeeja Yanin’s Top 3 favourite martial-arts or kung fu movies?

I’d have to say my favourites are “Ong Bak”, “The Big Boss” and “Enter the Dragon”.

Excellent choices! So, what’s one geeky or interesting thing that people don’t know about you?

Nice. If you could have a superpower what would you choose?

Sure would! Thank you Jeeja for your kind participation in this interview. We hope it gives our UK, European and American fans a glimpse into and a special connection with the Real Jeeja. We wish you much success with “Triple Threat” and look forward to seeing more of your action projects 2019!

Thank you and it’s been my pleasure to share with you and Kung Fu Kingdom!

Jeeja hanging with Iko Uwais on the set of Triple Threat

Jeeja brings the festiveFU from Thailand

“Triple Threat” is currently available on Video on Demand platforms in North America from Well Go USA; meanwhile, with China and other international markets coming soon…Eager to check out the wicked, hyper-kinetic action in “Triple Threat”? What is your favourite Jeeja Yanin movie or fight scene to date? Let us know in the comments below; Like, share and join in the conversation on Facebook and follow us on Twitter & Instagram.

NEW! You can now order your official KFK t-shirts, hoodies, phone cases, even lounge cushions and much more from our newly launched store on Redbubble!

Meantime, whether it’s Muay Thai, Taekwondo, Silat, wrestling or MMA you’re after, you’ll find all those and much more represented by stepping into the FUniverse. Check out our interviews with Tony Jaa, Tiger Chen, director Jesse Johnson, Top 10s, giveaways and why not subscribe to our YouTube channel for videos too?