The over-the-top, tongue-in-cheek yet simultaneously casual insanity of 2015’s “Kingsman: The Secret Service” brought a smile to many faces and proved that comparing a spy thriller to a live-action cartoon could be not a disparaging criticism but the highest compliment possible. Naturally, there’s plenty more physics-shattering craziness in the sequel, “Kingsman: The Golden Circle”, everything from mechanized arms right out of “Mortal Kombat” to taser-lassos that, like the bulletproof umbrellas before them; a string of words that perfectly encapsulate the sheer outlandish fun of the “Kingsman” cinematic universe!

Taron Egerton is Kingsman’s newest agent, Gary “Eggsy” Unwin, and is joined by his fellow alumni of “The Secret Service”, Mark Strong as tech expert Merlin, Sophie Cookson as his fellow agent Roxy, and Hanna Alstrom as his love interest, Swedish princess Tilde.

Julianne Moore steps into the villainous role of the perpetually cheerful megalomaniacal drug lord Poppy Adams, while Edward Holcroft portrays her right hand-man, rejected Kingsman recruit Charlie, and Elton John plays the role of Poppy’s hostage, Elton John. Eggsy and his comrades find some stateside allies in the form of the “Statesman”, comprised of Jeff Bridges as the head agent Champ, Channing Tatum as “Tequila”, Halle Berry as “Ginger Ale”, and Pedro Pascal as Jack Daniels aka “Whiskey”. Eggsy’s old mentor at Kingsman, Harry Hart aka Galahad, also returns despite the rather debilitating condition of taking a bullet to the face, with Colin Firth reprising the role.

Charlie has Eggsy on the ropes

One year after the events of “Kingsman: The Secret Service”, Gary “Eggsy” Unwin continues to fight for the safety of the United Kingdom and the world under the codename of “Galahad”, taken from his deceased “Kingsman” mentor, Harry Hart. However, the clandestine spy organization is about to face its greatest challenge after Poppy Adams, drug lord and leader of the terrorist group “The Golden Circle”, having ascertained the location of every member of Kingsman, lobs an inexplicable missile attack that sees every Kingsman killed, save for Eggsy and the organization’s tech expert Merlin. Now the only surviving agents of Kingsman, Eggsy and Merlin follow the group’s “Doomsday protocol”, which leads them to the American top-secret intelligence agency, “Statesman”. Eggsy and Merlin join with their new allies in uncovering what Poppy Adams has planned next, but soon make a shocking discovery – their ally Harry is still alive, with no memory of his life as an agent for Kingsman.

Harry deflects an assault with his bulletproof umbrella

“The Secret Service” was hardly timid about dancing to its own drum and throwing its audience headlong into the “007 meets Itchy and Scratchy” logic of its world, but perhaps because it already knows it’s got its audience on-board, “The Golden Circle” feels just a little more confident, self-assured and brazen about playing by its own rules than its predecessor. That self-assuredness is made clear in the film’s opening action sequence involving Eggsy who’s forced to battle Charlie in a speeding taxi with one door knocked off. The way it plays out would leave you or I liquified all over the road as the best-case scenario, but Eggsy not only escapes with his life but converts the taxi into a submarine and is piloting it underwater within minutes. And yet, like “The Secret Service”, “The Golden Circle” pushes the action to such patently ridiculous extremes without ever coming close to Jumping the Shark. This is partially because of how unabashedly it embraces the cartoon physics of the world it inhabits, but also because it adheres to “The Blade II Method” of comic book action – i.e. allowing the actors to perform the action up to the point of what is physically possible, with CGI and wire-fu taking over for anything beyond that.

…And since this only covers the opening five minutes of “The Golden Circle”, it has plenty of further opportunities to put “The Blade II Method” to use. Harry’s first day back out in the field after regaining his memory is one of them – the former Galahad still getting his coordination back, is seized by our heroes’ Statesman ally Whiskey and his trusty taser – whip, a weaponry classification I will never tire of typing or speaking!

Whiskey lassos up a tough hombre

Eggsy and Charlie battle in a speeding taxi

As with “The Secret Service”, “The Golden Circle” has its scenery-devouring villain with a bonkers scheme for world domination. Julianne Moore gives a career best performance as Poppy Adams, an insatiably cheerful nutcase who can serve a cheeseburger made from the corpse of her duplicitous underlings to another of her henchman without flinching for a moment from her 1950’s homemaker demeanour.

Her plot to corner the market of the worldwide drug trade is even more worthy and off-the-wall in its cartoonish supervillainy than was Richmond Valentine’s (although the U.S. government’s response to it feels disturbingly plausible) and her method of issuing her demands to the world is one of the purest set pieces of black comedy you’ll ever see.

However, after sending Eggsy, Whiskey, and Harry through a harrowing battle in the Italian alps trying to thwart Poppy’s scheme, “The Golden Circle” shows that it also knows how to tug a little at your tear ducts without truly going dark, which the audience gets to see in one character’s surprisingly moving sacrifice when the surviving Kingsman locate Poppy’s lair. It’s genuinely rare to see someone fall on the sword with this much emotional impact in a film that’s going out of its way to be this funny, but it wastes no time jumping right back into the heat of its off-the-wall finale. Here, Eggsy goes toe-to-toe with Charlie (and his mechanized “ARMageddon”) before the film brings the taser-lasso back into the equation for one truly nail-biting, edge-of-your-seat battle for the fate of the world – one that, in case I forgot to mention, involves a taser-lasso!

Eggsy holds his own against Charlie

Harry holds off one of Poppy Adams vicious robo dogs

“Kingsman: The Golden Circle” follows the road map of a how to make a great sequel, and is every bit the blast of candy-coated Looney Tunes spy comedy fun as its predecessor. Julianne Moore delivers an entertainingly evil villain performance worthy of Judge Doom, and the film thumbs its nose at the very notion of realism while delivering crazily outlandish action sequences that still never lose their human element. Admittedly, the film’s country & western rendition of Cameo’s “Word Up” feels like it might’ve been a bit more appropriately occupied by the Gun or Korn cover, but hey, maybe that’s just the heavy metal punk in me talking!

Poppy Adams is one sick puppy

Whiskey is quick on the double draw

Eggsy hangs on for dear life 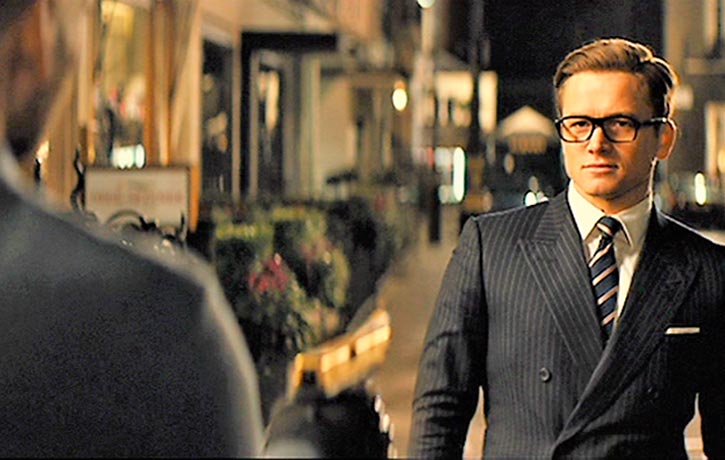 Eggsy is unperturbed by your sidearm

Ginger Ale and Merlin provide their allies with technical support

Harrys not quite as dead as Eggsy and Merlin thought

Seen the movie, what did you think of its action, stunts and fights this time around? Let us know in the comments below, join in the conversation on Facebook and follow us on Twitter. Don’t forget, to check out our previous movie reviews too!