The phrase “what could have been” is typically applied to in a situation of mournful failure, but not in the case of “Showdown in Little Tokyo”. On the contrary, here’s a buddy-cop martial-arts comedy trifecta that succeeds on just about every level, one that pretty much beat “Rush Hour” to the “cultural opposites” angle of the buddy cop movie by seven years.

With the undeniable star power and chemistry of its two leads, “Showdown in Little Tokyo” is something that could conceivably have continued delivering that particular batch of goods as a series, had tragedy not befallen one of those leads just a few years later.

Dolph Lundgren steps into the role of stoic, Japanophile L.A. cop Chris Kenner, while the late Brandon Lee portrays his wise-cracking Japanese-American partner, Johnny Murata, with the two forming a budding action movie duo chemistry that makes the film worth your while all by itself!

Cary-Hiroyuki Tagawa plays the villainous Yakuza boss, Funekei Yoshida, while Tia Carrere portrays nightclub singer Minako Okeya. If you know your stuntmen, “Showdown in Little Tokyo” is also quite the cameo factory, with everyone from Simon Rhee, Roger Yuan, Gerald Okamura, James Lew, Al Leong, and Jeff Imada all popping up through the film.

When L.A.P.D. cop Chris Kenner is partnered with Johnny Murata it’s a true pairing of opposites. Murata may be Japanese-American, but he is far less enamored with his own culture than Kenner, who was raised in Japan. Their only point of commonality is their shared expertise in martial arts.

However, while investigating a drug-related death in L.A.’s Little Toyko, Kenner and Murata are able to connect the death to the Yakuza, which in turn leads them to Funekei Yoshida, a one-time Yakuza-enforcer who has since risen to power within the organization. Kenner also has a personal vendetta against Yoshida, given that the latter had murdered his parents years before in Japan. After resolving their divergent approaches to law enforcement, Kenner and Murata team-up to put a stop to the Yakuza’s stranglehold over Little Tokyo once and for all. 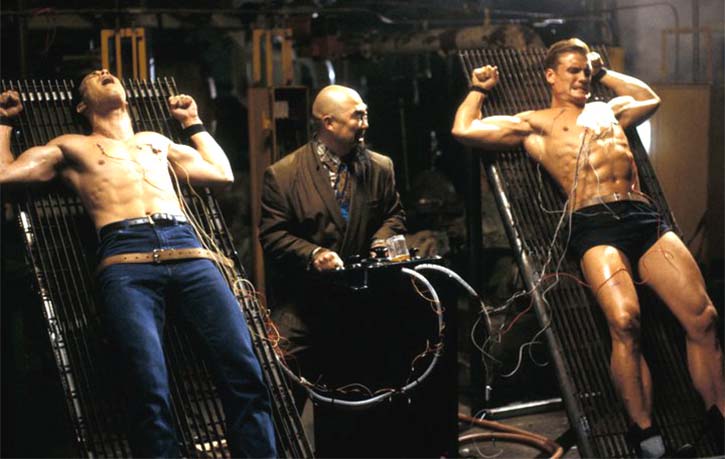 Brutal torture for Kenner and Murata

It’s pretty much impossible to watch any Brandon Lee movie today and not wonder about where he was headed had tragedy not struck on the set of “The Crow” (he certainly would’ve been one hell of a Johnny Cage had he lived to appear in 1995’s “Mortal Kombat”). However, one can’t help but watch “Showdown in Little Tokyo” with a particularly curious interest of the career arc Brandon was headed down, due to his consistently scene-stealer comedic banter and his exceptional chemistry with Dolph Lundgren.

He snags a good ninety percent of the best lines in the movie, and makes Johnny Murata into the perfect yin to Kenner’s yang, an Asian-American cop whose cultural disposition is light on the Asian, heavy on the American. Murata meets his perfect inverse in the form of Kenner, a white man for whom Japanese is arguably his first language, and who would fit right in fighting alongside Katsumoto in feudal Japan.

While the meeting of cultural polar opposites would prove to be far more pronounced with the pairing of Jackie Chan and Chris Tucker in “Rush Hour”, “Showdown in Little Tokyo” is a relic today not just for its place in Brandon Lee’s all-too-brief career, but in how far ahead of its time it ultimately proved to be in doing a buddy cop movie with such culturally opposite heroes. To put it simply, “Showdown in Little Tokyo” was “Rush Hour” before “Rush Hour” was “Rush Hour! 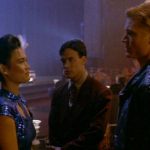 Kenner and Murata unite to bring Yoshida down

Kenner trains for battles ahead

Clearly cognizant of its unusually brief running time, “Showdown in Little Tokyo” wastes not a minute to jump straight into the action with Kenner busting an underground fight organized by the Yakuza. However, easily the best moment of the opening set piece is Kenner leaping seven feet in the air to avoid an oncoming Yakuza car, letting the viewer know that the film doesn’t take itself as seriously as its superhuman Samurai hero does. (Later in the film, Kenner overturns a parked car with his bare hands without anyone in the film batting an eye.)

He and Murata also briefly get into it when the latter walks in on a fight between Kenner and some Yakuza thugs in a Japanese tea house before learning they’re partners, but the film is much more fun later on when they fight side-by-side in Yoshida’s nightclub. Kenner and Murata’s later battle against Yoshida’s henchmen in a bath house is another of the film’s action highlights, while Murata’s comedic banter lands some of its biggest laughs when he and Kenner are captured and strapped to electric platforms by Yoshida’s torture expert.

The finale, coming after a brief training sequence on Kenner’s part, sees he and Murata storming Yoshida’s drug headquarters located in a local brewery. Murata takes on one of Yoshida’s fiercest henchmen, played by Toshishiro Obata, in the single best one-on-one fight in the film, marred only by a punchline by Murata that is the one and only time in the film he fails to have something clever to say at the right moment. Given the title of the film, it can only end with Kenner and Yoshida clashing katanas in a um…Showdown in Little Tokyo. Curiously, this is the one part of the film where Yoshida has gotten to really show what he can do, which given Cary-Hiroyuki Tagawa’s subsequent reputation as Hollywood’s undisputed king of Asian villains, might be a little surprising to viewers who discovered him through his Shang Tsung role. Still, it wraps up the film well, and does so in a way that lives up to its title.

Murata locks in some MMA 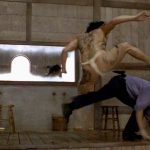 Kenner dispatches two enemies at once

Murata finds a language barrier with the Yakuza

Most “What if?” movies fall into that category from failing to live up to their potential, but “Showdown in Little Tokyo” is a rarity indeed. You can clearly see the foundation of a fantastic action-comedy series being laid throughout the film, and the concept of a buddy cop duo with an Asian cop less attached to his own culture than the white cop he’s partnered with shows just how far ahead of “Rush Hour” it was.

With Brandon Lee’s career so sadly cut short, we’ll never see what could’ve been with him in a “Showdown in Little Tokyo” series, but what we got was a thoroughly entertaining, action-packed buddy cop movie starring two leads with amazing chemistry. Sometimes, you’ve just got to count your blessings!

Yoshida shows hes a master of the katana 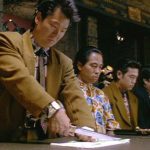 Yoshidas a powerful leader within the Yakuza

Twenty-seven years on…do you remember “Showdown in Little Tokyo”, which fights and action scenes do you fondly recall best? Who should star in a SILT Netflix series? (oops!) Let us know in the comments below; Like, share and join in the conversation with us on Facebook and follow us on Twitter & Instagram. (Open KFK’s treasure chest of FUflix reviews both old and new!)