Sometimes a film comes along that puts the martial arts in the spotlight with everything else serving as secondary conduits providing context for the fighting form to entertain and shine. Just as “Only the Strong” showcased the acrobatic and rhythmic grace of the Brazilian martial art Capoeira, “The Perfect Weapon” puts centre stage the no-nonsense hard hitting form of Kenpo.

Making his film debut is Jeff Speakman, a student of Kenpo Grandmaster Ed Parker, as Jeff Sanders out to avenge the death of his friend and mentor Kim played by Mako. “Best of the Best” star John Dye is Jeff’s estranged brother, Adam and Dante Basco (voice of Zuko in “Avatar: The Last Airbender”) is orphan Jimmy Ho.

Jeff Sanders returns home to find his friend Kim being terrorized by members of the Korean mafia. When his intervention results in Kim’s death, Jeff seeks revenge on those responsible with the help of orphan Jimmy whom Kim had taken under his wing.

Who said it never hurt to ask!

The Professor whips into action

Sanders is about to school the Professor

Poised for a Kenpo stick battle

Like a child in a candy store “The Perfect Weapon” is a pick ‘n mix display of martial skill and precision choreography that would have martial arts practitioners and film fans alike salivating. Fight choreographer Rick Avery has packed the film with plenty of technically rich fight scenes, with star Jeff Speakman making his graceful, swift and devastating skills all look so easy.

There are times it feels like an infomercial for the art complete with Master Lo (played by Hawaiian actor Seth Sakai) in flashback explaining Kenpo principles.

The various fight scenes, along with Speakman performing an impressive Kata over the opening credits, almost feel like an expo of Kenpo use, such as taking on some heavies in an antique shop with relative ease, and unleashing a whirlwind of punches and locks on a gang of muggers leaving them in an unconscious heap. Yet these are light-hearted openers providing a satisfying feel of seeing bullies get some destructive taste of their own medicine but also shows Kenpo as a very clean and effective street fighting style.

“Kickboxer” director Mark DiSalle keeps the camera firmly on the action and shows some reserve in employing his usual repetitive edits and slow motion sequences. Speakman’s fight in the Taekwondo gym provides the best scenario for some visibly technical components of Kenpo in action as he takes on three opponents including James Lew who dazzles with an array of aerial and spinning kicks, and a powerful looking axe kick.

Jeff and Jimmy Ho find a common cause

The visible contrast in styles with the dynamism and aerobatic form of Taekwondo is particularly noticeable where Speakman takes down one opponent by stepping forward with combination punches then a sweeping right leg taking him off balance before unleashing a hailstorm of strikes finishing off with a couple of kicks. Later in the Croc Pit Club scene Speakman takes to the dance floor where a frenetic barrage of strikes, kicks, and a bone crunching wrist lock are given the stylish treatment under a strobe light to a 90’s disco beat.

The film does fall deeper into cliché when Speakman goes from returning Prodigal Son looking for vengeance to a veritable Ninja infiltrating heavily guarded compounds like an SAS trooper but with Kenpo fighting sticks and some knives. This is yet entertaining until the much anticipated David vs Goliath showdown between Toru Tanaka and Speakman after leaving a trail of bodies in his wake. This battle doesn’t disappoint with Tanaka barely responsive to Speakman’s kicks and punches, instead pummelling him and then throwing him around like a sack of potatoes, leaving Speakman bleeding and bruised. This final fight differs from many others of its elk as it really shows the tactics employed to bring down his much larger opponent; using every conceivable strike in rapid succession turning it more into a battle of wits and strategy with a satisfying outcome.

The substance of the film’s plot is simple and characters engaging enough to drive the story forward along with great performances all round, a particularly impressive debut from Jeff Speakman and there are plenty of fight scenes to keep martial arts film fans gleeful! Overall this is a highly entertaining action flick providing the perfect platform for some stunning Kenpo displays that would have made the late Grandmaster Parker proud. 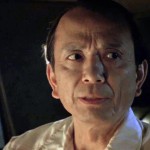 It’s all in the wrist

He’s got the power and an impressive physique

Getting down ‘n dirty with the guys at the Croc Pit