Seagal is back (minus the ponytail) in “Under Siege”, this time as a lowly cook and former Navy Seal Casey Ryback who charges to the rescue. By the far best villain in any of Seagal’s films is Tommy Lee Jones the cold, calculating yet eccentric former CIA operative William Strannix who leads the terrorist raid on the USS Missouri.

Aiding Strannix in his larcenist endeavour is Gary Busey as treacherous Executive Officer Commander. Busey essentially gives a pantomime version of “Lethal Weapon’s” Mr Joshua complete with a drag outfit. Colm Meaney appears as the point man, Doumer, whose aim is sharper than his wit. Cast as Ryback’s sidekick for what can only be two obvious reasons is former “Baywatch” babe Erika Eleniak.

Assessing the situation in the war room are Andy Romano as Admiral Bates, Dale Dye as the admiral’s aide Captain Garza and facing some tough questions about how Strannix was able to take control of a US battleship so easily is Nick Mancuso as CIA chief Tom Breaker.

Well thats one way to disarm

Things are getting heated on the Missouri 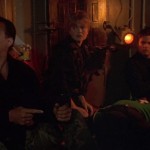 Team Ryback go on the offensive

Steven Seagal uniformed in Under Seige

Terrorists storm the USS Missouri and hold the crew hostage while they steal the American Battleship’s arsenal of Tomahawk missiles. It’s up to one man Casey Ryback, the ship’s cook (who also happens to be a former Navy Seal) to stop them, foil their plot and save the day.

After the full on blood fest of “Out for Justice” Seagal reunited with “Above the Law” director Andrew Davis and stunt co-ordinator Conrad Palmisano (“Marked for Death” and “Out for Justice”) for a more toned down yet equally exciting action thriller. From the banter down in the galleys (featuring Seagal at his most laid back) to the chilling start of the terrorist takeover J.F Lawton’s absurd “Die Hard” on a boat premise is packed with the right balance of explosive action and humorous moments to keep the film ticking along at a steady pace. It features many “Die Hard components including inept rescue attempts, covert communication with the authorities and even abseiling to avoid an exploding helicopter!

Seagal fans hoping for more of the same bone crunching , limb twisting martial arts action will be disappointed, but more with the quantity rather than the quality on show. There are still opportunities aplenty for Ryback to slice, stab, shoot, punch and kick, break bones, and blow stuff up with all the cool classiness exclusively attributed to action heroes. Scenes such as taking out four guards flanking a damsel in distress with a combination neck break and double head shots all at once will have fans punching the air with delight along with the workshop scene in which Ryback shows off his culinary and Aikido skills on his opponents’ vital body parts.

Seagal is about to get his point in

Meanwhile at US Air Force HQ…

The remainder of the film sees Ryback wielding automatic weapons, and building home-made bombs as he launches his own guerrilla war against Strannix and his top notch mercenaries, with a little help from some crew mates, and stripper Jordan Tate (Eleniak providing some comic relief). Seagal certainly doesn’t seem to mind sharing the spotlight but it is his show come the end when he finally faces Tommy Lee Jones in a short but thrilling knife fight.

“Under Siege” is an action-packed film best enjoyed with the brain switched off and disbelief suspended from a great height. It takes you on a nautical thrill ride of gun fights, joviality, some ludicrous dialogue (“One I don’t date musicians and two I do not kill people”) and excellent fight scenes. Tommy Lee Jones is an interesting and effective villain; a cross between a drug addled rock star and maniacal dictator in contrast to Seagal’s cool swagger and a steely gaze that looks as if he could kill with a glance. Whilst it does emulate “Die Hard” somewhat it is far from a blatant copy, more of a tongue in cheek homage -and of all his work it remains financially and critically Seagal’s most successful film to date.

CIA Head Tom has some explaining to do

Chaos breaks out aboard the Missouri

Casey does his aqua ninja thing

Were puppets in this same sick play

Brothers behind the scenes!

Tony Jaa joining Never Back Down 3?