Making its worldwide debut on Blu-ray from a stunning 2K HD restoration, comes the ground-breaking “Zu Warriors from the Magic Mountain” which releases on 20th April, courtesy of Eureka Entertainment you can also order your copy now on Amazon!

Possibly Hong Kong’s most acrobatic action hero, Yuen Biao stars as “Di Ming-qi / Dik Ming-kei”. Working initially as a stunt actor and double in films such as Bruce Lee‘s “Fist of Fury“, Biao became a leading Hong Kong action star in his own right with roles in the movies “Knockabout“, “The Prodigal Son” and “The Iceman Cometh“. He saw his greatest successes starring alongside his “opera brothers”, Sammo Hung and Jackie Chan, in the “Lucky Stars” movies as well as the hits “Project A“, “Wheels on Meals” and “Dragons Forever“.

Popular actor and singer Adam Cheng Siu-chow stars as “Ding Yin / Ding Yan”. In a long television career, Cheng had previously starred in many wuxia adaptations. He would go on to appear in movies such as “Shaolin and Wu Tang”, “Fong Sai-yuk I & II” and “Drunken Master 3”.

Taiwanese actress Brigitte Lin Ching-hsia stars as the “Ice Queen”. Lin has had a glittering Asian film career appearing in films such as “Police Story”, “New Dragon Gate Inn“, “Swordsman II”, “Peking Opera Blues” and “Ashes of Time”, to name but a few 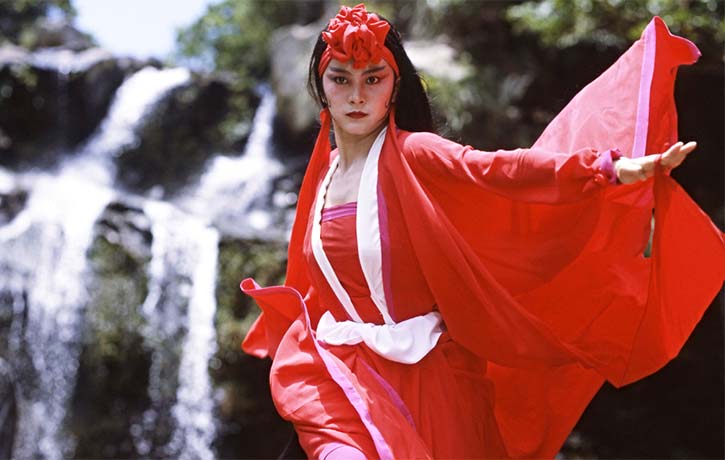 This Zu warriors got style

Yuen Biao’s close friend and frequent collaborator, action legend Sammo Hung guest stars as “Chang Mei / Red Army soldier”. Alongside fellow action stars Yuen Biao and Jackie Chan, the skills that Sammo learnt at opera school as a child helped him to redefine martial arts movie action for five decades. His vast filmography ranges from “Enter the Dragon“, through to “The Prodigal Son“, “Eastern Condors“, “Encounters of a Spooky Kind“, “Wheels on Meals“, and many, many more classics.

In one of her early big screen appearances, actress Moon Lee Choi-fung plays “Mu Sang”, one of the Ice Queen’s guards. Moon Lee would go on to become one of the leading names of female action stars in the late eighties and early nineties, with movies such as “Angel” and “The Avenging Quartet”.

Damian Lau stars as “Abbot Hsiao Yu / Xiao Ru”. A popular television actor, Lau made his big screen debut in “Last Hurrah for Chivalry“. He would go on to appear in classics such as “Duel to the Death”, “Heroic Trio”, “New Legend of Shaolin” and “My Father is a Hero / The Enforcer“. 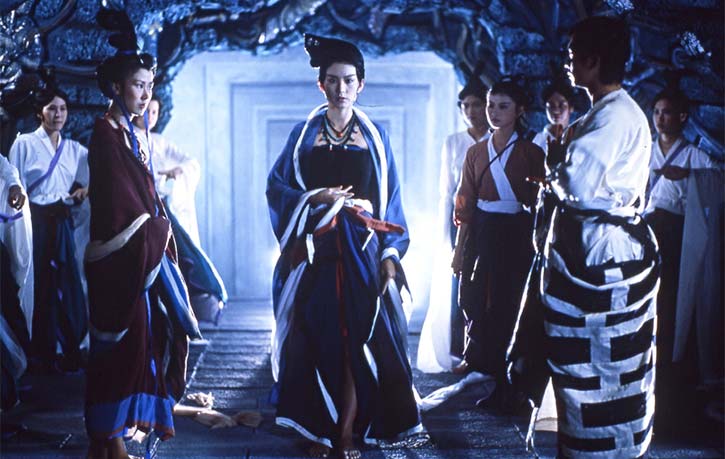 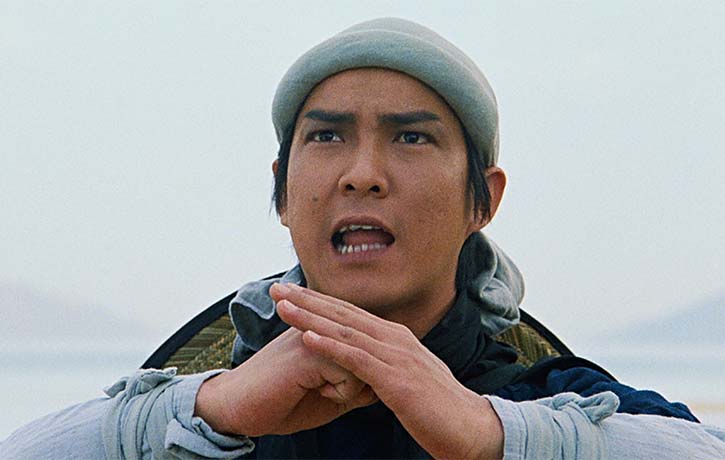 The film is packed with zany humour

During the Tang Dynasty, Di Ming-qi deserts from the army.

Chased by demons into the mountain of Zu, he is saved by Master Ding Yin and becomes his student. When they are ambushed by the Blood Devil, demon-chasing Abbot Hsiao Yu and his pupil Yi Zhen, come to their assistance.

With the help of Master Chang Mei, they manage to hold off the Blood Devil but need to find the Dual Swords to destroy it.

Seeking refuge in the Celestial Fort, the Ice Queen and her disciples are initially wary of helping the strangers. However, fate forces their hand and they must find a way to defeat the forces of evil, and ultimately save the mortals of the world. 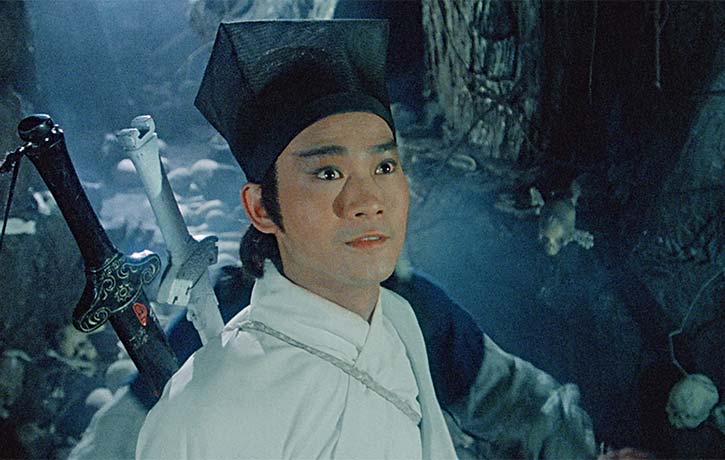 Will the Ice Queen offer help in our heros quest

Yuen Biao leads us into the energetic action

The opening credits and score reminded me of a 1940’s black and white serial. Yuen Biao leads us into the energetic action after escaping from his army unit and bumping into Sammo Hung.

The action is crafted in such away that the cleverly interspersed verbal sparring reveals the two characters’ back-stories.

There is also plenty of comedy thrown into the mix. Following this introduction filmed in bright, primary colours, which incidentally look stunning on the Blu-ray, Yuen Biao finds himself in darker surroundings. The switch in setting mirrors the dramatic switch in tone, as the movie flips from period martial arts battles, to full-on supernatural fantasy.

Yuen Biao has always been one of the most stylish, acrobatic performers, and he is no less so here. The scene has more in common with “Encounters of the Spooky Kind” than “Knockabout”, as he tumbles and rolls to evade some mysterious demons. 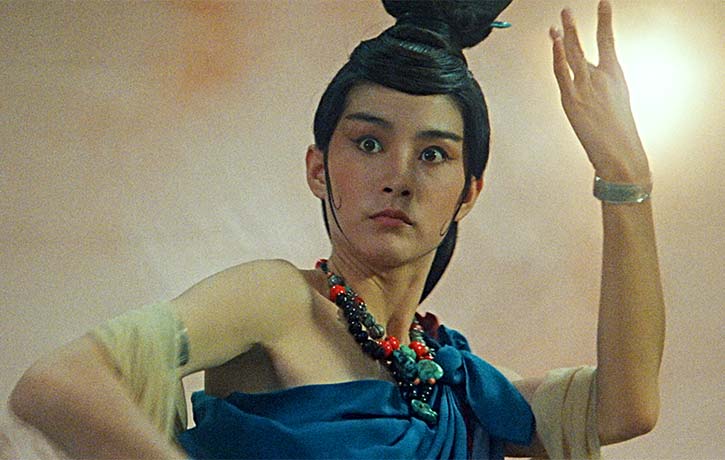 A fantasy fairytale that has it all 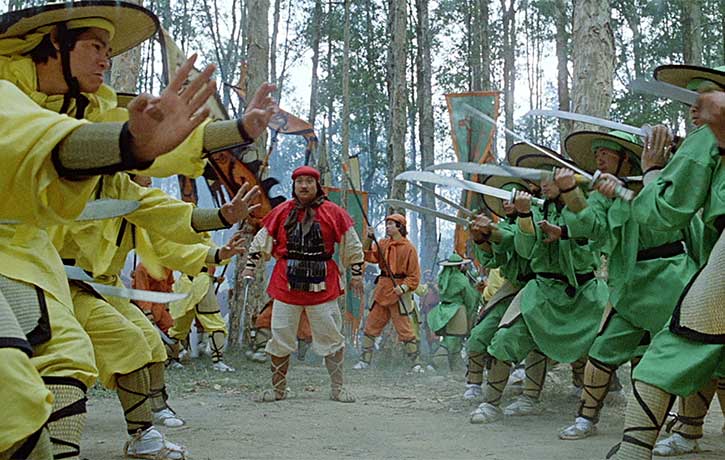 As our hero progresses into the almost alien landscape of the mountains, the fantasy element is upped with lots of wirework. One downside of having a high definition picture is that you can often clearly see the wires. However, anyone familiar with the art of movie wirework will know it still requires an incredible amount of physical skill to perform the intricate choreography.

The fantasy elements are enhanced with trick photography, special effects, animation, and clever lighting. It may look cheap and hokey compared with today’s CGI, but for a Hong Kong film made in the early eighties, the end result was nothing short of revolutionary.

The final battle is a mix of Chinese fantasy, “Superman the Movie” flying effects, and bizarrely, the lightsabers of 1977’s “Star Wars”. In anyone else’s hands, this could all be dismissed as a terrible mess, but director Tsui Hark’s visual style, humour, enthusiasm, and almost palpable passion, keeps everything onscreen watchable and entertaining.

The forces of evil must be defeated

The Celestial Fort disciples are initially wary of helping the strangers

Much like the way “Encounters of the Spooky Kind” would redefine and revitalise martial arts horror, “Zu Warriors” redefined martial arts fantasy / xianxia (Chinese fantasy stories influenced by Chinese mythology) movies forever. It was Tsui Hark’s first critical hit, garnering a cult international following, catapulting a career that would see him become arguably Hong Kong’s most influential filmmaker of the modern era. To this day, in movies such as “Detective Dee”, “The Taking of Tiger Mountain”, or “Thousand Faces of Dunjia”, Tsui Hark continues to push the boundaries of special effects and stunning visuals in Chinese movies, but he started here.

As with Eureka’s Blu-ray release of “Police Story 1 & 2”, this features an excellent bonus feature in the form of an episode of “The Son of the Incredibly Strange Film Show”. First airing on UK television on Channel 4 in 1989, Jonathan Ross explores the weird and wonderful world of Hong Kong horror and fantasy films, including Tsui Hark’s contribution.

This episode served as an introduction to Hong Kong films for many British fans, and is still just as fascinating to see today. Eureka brings things right up-to-date with an extensive interview with Tsui Hark filmed in January 2020. Hark is a great interview subject happy to talk about all aspects of his history and film making process. There are also interesting older interviews with stars Yuen Biao, Moon Lee and Mang Hoi.

Who ya gonna call Demon Chasers

Di Ming qi wants to desert from the army

This is a non-stop, borderline psychedelic, eye-popping visual feast. Every frame of the film pulses with energy to deliver a fantasy movie that, even today, is pretty unique. For fans of influential Asian cinematic masterpieces, “Zu Warriors from the Magic Mountain” is a fantasy fairytale that has it all; exciting martial arts choreography, striking visuals and zany humour! 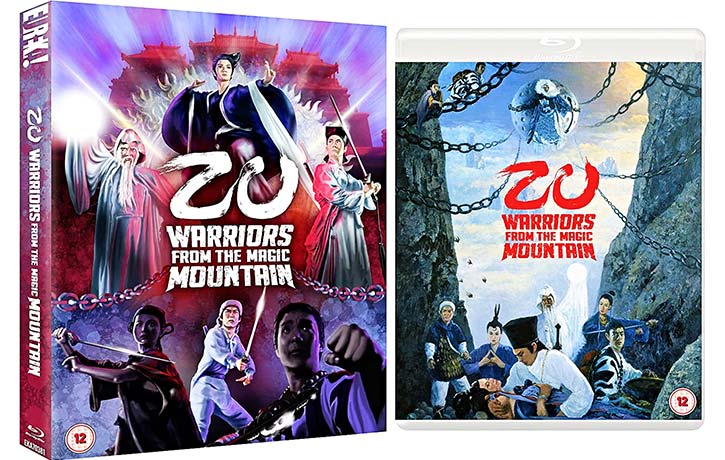 “Zu Warriors from the Magic Mountain” releases on 20th April 2020, courtesy of Eureka Entertainment and you can also order your copy in advance from Amazon!

KEEP YOUR ZU WARRIOR MOUNTAIN FU ON with a Universe of news, Top 5’s, Top 10’s, exclusive interviews, wear your best moves in your own KFK gear and subscribe for more flights of fantasy-fu on YouTube!