Hell’z Windstaff (also known as The Hells Wind Staff and The Dragon and the Tiger Kids) was released in 1979 by director Tony Wong and the Yuk Long Movie Studios. The film later gained cult status after being re-released and immortalised by kung-fu-centric hip hop supergroup: the Wu Tang Clan.

The movie itself is an action packed showcase of unique martial arts weaponry and fierce fisticuffs. Featuring the legendary Hwang Jang Lee as the super-villain armed with the silky stick skills that make us all want to walk around with a moustache and a mullet haircut!

Based on the Dragon Tiger Gate comic book series, this classic has its own slice of comic humour blended in with a story of revenge against an impossible foe. There’s plenty of fast flowing action, some wonderfully stylish choreographed training scenes and plenty of dramatic twists in this cult classic kung fu comedy drama.

What really gives this movie star quality however is the clinical perfection of Hwang Jang Lee’s flawless martial arts mastery. This movie is a must watch for fans of the vintage kung fu era and is highly recommended to those of you who are ready to discover it…

The casting on this film is well thought out with plenty of quality throughout, you will be pleasantly surprised! The legendary Hwang Jang Lee 9th Dan Grandmaster of Tang Soo Do and Taekwondo headlines the production as super villain Lu Shan-tu. Hwang is widely regarded as the “king of the leg fighters”, and this performance follows on from his incredible ability to play the perfect bad guy as seen in Golden Harvest’s 1978 productions of Drunken Master and Snake in the Eagles Shadow. With his aliases of “Silver Fox” and “Thunderfoot” rest assured that you are in the hands of one of Hong Kong cinemas’ greatest legends. The two main heroes are Meng Yuan Man and Mang Hoi (who have featured in no less than 80 films between them!). They combine well to form a double act that never say die. The supporting cast features the likes of Jason Pai Piao as the street performer turned kung-fu master who became a Shaw Brothers favourite. Kwan Yung Moon who himself earned many accolades for his performances with Jackie Chan in Master with Cracked Fingers (1974) and in Project A (1983).

Hsu Hsia (who notably played the character “King of Sticks” in Drunken Master 1978) features here as Cousin Hsu. He also steps up to the role of action director just in time to add to Hwang’s “Devils Stick” performance.

Straight down the centre line

Somebody keep an eye on my bird..

The premise of the whole film is set when Mr Wong’s nephew Tiao Erh (Yip Fei Yang) is hunted down and made to pay for the crime of rape. He is punished and ends up losing one of his eyes to Cousin Hsu (Hsu Hsia). Banished from the household forever, he joins up with super-villain Lu Shan-tu (Hwang Jang Lee), to get his payback in this good old fashioned “eye for an eye” style revenge saga.
In the meantime our unlikely heroes appear in the form of Mr Wong’s disorderly Son Tiger (Meng Yuen-man) and his good friend and equally uncontrollable training partner Stone Dragon (Mang Hoi).
When their kung fu instructor runs away the family hire a travelling street hustler Ching Wan-li (Jason Pai Piao) in order to keep Mr Wong’s unruly son in line.

With the help of Lu Shan-tu, Tiao Erh takes his revenge on Cousin Hsu for the eye. The gang take their reign of terror to the docks where under the guise of four conmen known as the Four Snakes they plan to trick the local townspeople into signing their lives away to a life of slavery in Borneo.

Our heroes discover the evil plan and decide to expose the Four Snakes’ true intentions. Bringing down on them not only the wrath of the Four Snakes and Tiao Erh but also the fury of Lu Shan-tu and his…Hells Wind Staff!

More masters are martyred before our heroes discover the key to defeating the deadly devil’s stick technique which lies in a combination of the Dragon Claw and the Rowing Oar technique. All is not lost, however, when help comes in the form of Stone Dragons sworn father (Kwan Yung Moon) who happens to be the only man to know the long lost fighting style. Epic training sequences begin as the two heroes risk life and limb in an ultimate showdown with the Hells Wind Staff.

This movie is action packed to the brim with loads of classical fight scenes featuring an array of classic animal styles as well as short sticks, long sticks and even a paddle-staff! The highlight of the action performances come from Hwang Jang Lee’s amazing long stick wizardry. Early on in the film, he dazzles the viewer with an eye-catching stick and kick form that sets the precedent for an action packed, fast flowing movie loaded to the hilt with revenge…!

There are some great training sequences in the film. For instance the scene where one of our heroes, Mang Hoi, has to round up the chickens with eggs strapped to the bottom of one of his shoes. It’s a very entertaining concept that and worthy of much admiration! He later demonstrates expertise with his control of the paddle-staff in some solo training scenes and in combat versus Hwang’s Hells Wind Staff.
The awesome training sequences see Meng Yuan Man’s agility shine through as he balances his entire body weight on a bench whilst picking up bricks with his feet and expertly tossing them into a basket. Meng’s acrobatics are well demonstrated in the fight scenes in particular where both heroes combine and fight together using a double cartwheel tactic that would not look out of place in the Chinese State Circus! Actually, you can sense that their fight choreography is well planned throughout the film as it all looks skilled and highly entertaining. Our cowardly sub-villain, Tiao Erh, who never goes anywhere without his entourage (rappers take note) has some great scenes with Hsu Hsia. The two fight a few highly charged battles with some old testament style consequences! 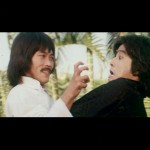 Not my other eye

Monkey Magic eat your heart out..

The supporting cast also provide some highly entertaining action. Jason Pai Piao gives an inspiring display not least in the market scene where he shows a great affinity for fighting with short sticks vs. long stick. His adroitness also provides entertainment in the training of Mr Wong’s unruly son.

Hwang himself also fights for long periods without his Hell’z Windstaff and gives the viewer an unequivocally clear account of his off-the-planet kicking skills! His depth of knowledge of kung fu fighting styles particularly including the Eagles Claw make other kung fu baddies hibernate for a very long time! In an amazing display of agility, Hwang performs his amazing triple-kick-offense technique that has to be seen to be believed!

In the final fight scene, our two almost inexhaustible heroes, get a helping hand from Stone Dragon’s sworn father who is seemingly the only man to have ever fought Lu Shan-tu and ever lived to tell the tale, albeit in a garden shed to his grandson…! Surprisingly agile for a pensioner, he manages some high kicks of his own as he aids in the downfall of Lu Shan-yu and the unrelenting Hell’z Windstaff.

There is very little downtime in the action sequences. What more can you expect when you have four of the best action directors in the business dictating proceedings! Hsu Hsia, Corey Yuen, Chin Yuet-sang and Yuen Shun-yee take command of this movie and make sure you are not left wanting…!

When the evil warlord, played by Hwang, rises to power and begins a plot to sell the local townspeople of a small Chinese village into slavery, two young heroes risk it all by standing against it and putting their life on the line…

While obviously not the hero, it is definitely Hwang who provides the most memorable performance cementing him as Hong Kong cinema’s baddest ever baddie! His mesmerising staff sequences are as awesome as they are exhilarating. You may well find yourself rewinding and re-watching this one to learn the moves!

Hell’z Windstaff is a treat well worth the price you could easily pick it up for and should be in every kung fu fanatic’s collection. In essence, this movie has more kung fu than you can shake a stick at!!

Mike or simply Drill-bit to his close friends has been hooked on Martial Arts ever since Mr Miyagi made it ok for men to wax. A lifelong Martial Arts practitioner and now Kung Fu Instructor, Mikes punchy reviews take an unusual stance on what you thought you knew!!! If you don't know you better axe somebody!!!