Although billed as the third film in a trilogy, “Drunken Master 3” aka “Drunken Master Killer” bears no relation to the Jackie Chan film series. Some have considered it a poor imitation but the film offers some memorable moments to entertain martial arts fans.

Willie Chi is cast as the young wayward Wong Fei-Hung with some big shoes to fill.

Michelle Reis is Princess Sum Yu whose marriage plans to a prospective evil Emperor are hampered when she is kidnapped by rebel leader Yeung Kwan played by “Infernal Affairs” star Andy Lau. Reis is the comedienne of the film, whilst Lau is introduced at the beginning only to disappear again until the final battle.

Renowned director and choreographer Lau Kar-Leung is Uncle Yan, a wine maker who also runs a shelter for single mothers. Leung’s long-time collaborator from the golden days of Shaw Brothers Studios Gordon Liu (“36th Chamber of Shaolin”) plays the pantomime villain of the film, Governor Li charged with the recovery of Princess Yu.

The man on the bus kicks out

At the turn of the 20th Century, local doctor Wong Kei-Ying (Adam Cheng) and his son Wong Fei-Hung find themselves caught up in a power struggle between the White Lotus Society looking to enthrone a tyrannical Emperor and a group of revolutionaries trying to stop them. Wong Fei-Hung is charged with keeping a young princess and her jade ring from falling into the hands of the sect’s military leader Governor Li until the revolutionaries arrive to spirit her away.

The film’s got a dubious sense of pace and there’ s perhaps an over-emphasis on its juvenile Chaplin-esque comedy -the result of a rushed production? The promise of an exciting fight between Andy Lau and Gordon Liu armed with a bamboo staff and sabre respectively is cut short and the film’s star, Lau is ushered away. This leaves the viewer with mostly more miss than hit comedy of errors involving Wong Kei-Ying hiding Sum Yu from Li by passing her off as his wife much to his son’s frustrations. Thankfully the action picks up again when Wong Fei-Hung and Sum Yu take the steam bus into town.

There Hung fends off the amorous attentions of Simon Yam billed simply as “Gay Man on Bus”. From the crowded bus’s cramped setting to Uncle Yan’s wine shop, Yam tries to first kiss then kick Hung in what is essentially a lighter take on his camp villainous role in Ringo Lam’s “Full Contact”. Yam over plays the effeminate operative with a fighting style that blends voguing and Kung Fu and with Chi, then Leung, matching Yam with dandy moves of their own certainly makes for an entertaining action and comedy combination. 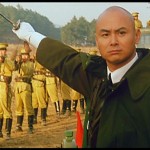 The exhilaration of the penultimate scene with Lau Kar-Leung fending off a horde of White Lotus brutes includes more of the traditional Kung-fu fighting with Leung (here at 58 years old) showing the same energy and ability as the younger players. It’s the final showdown, however that’s the standout moment when all the talent come together for a ten minute long battle pitting Lau, Chi, Cheng, Leung against Liu and the White Lotus sect.

Here Leung pulls out all the stops with some jaw dropping fights. The action is quick but the camera catches the intricacies of the Hung Gar manoeuvres from wide, sturdy stances to the whirlwind-like montage of open-handed strikes, blocks and spin kicks. The inclusion of Chinese weapons Dao (Chinese broadsword), Qiang (spear) and Sanjiegun (three section staff) add variety to the battle but it is Willie Chi’s abacus doubling as a skateboard and a weapon that provides the sort of innovative and entertaining action fans hanker after. Chi brings a likeable quality to the young Wong Fei-Hung exuding some cheeky charm and excellent acrobatic Kung-Fu abilities.

Despite its hasty production with the script rushed to coincide with the release of “Drunken Master II”, Lau Kar-Leung’s reimagining of the Wong Fei-Hung legend provides enough impressive action to keep the film entertaining. Veteran performers Gordon Liu and Lau Kar-Leung shine in both the comedy and the fighting aspects along with younger stars Andy Lau, Adam Cheng, and Willie Chi managing to dazzle, especially in the finale.

Father and son stand their ground

Andy Lau returns for the showdown

A White Lotus baddie with a sanjiegun

The Dragon's Snake Fist is out!