Here’s a Hong Kong action movie combining cops and villains, family drama, and intense martial arts fights. It stars Jet Li, Anita Mui and Xie Miao, and is directed by Corey Yuen. It was originally released as “My Father is a Hero”, and was re-dubbed, re-scored and edited for the American market as “The Enforcer”.

Chinese Trailer (My Father is a Hero)

Martial arts superstar Jet Li steps away from portraying historical kung fu masters to play the tough Chinese cop “Kung Wei”. By the time this movie was made, Li had established himself as one of Asia’s most popular movie stars with roles in movies such as “The Shaolin Temple”, “Swordsman II”, Fong Sai Yuk”, “Fist of Legend”, and of course the “Once Upon a Time in China” films.

The late great Hong Kong singer and actress Anita Mui stars as Hong Kong detective “Inspector Anne Fong Yat-wa”. As a singer Anita was known as the “Madonna of Asia”, but she was also popular as an actress with roles in “Drunken Master II“, “Miracles“, “Moon Warriors”, “Rumble in the Bronx” and “The Heroic Trio”, to name but a few.

Kung Wei puts his man down

This henchman gets drummed to defeat

Having appeared in productions such as “Return of God of Gamblers” starring Chow Yun Fat, Xie took a break from film work to focus on his school education. In 2006, he graduated from the Capital Institute of Physical Education (CIPE) in Beijing and resumed his acting career. He rose to prominence once more in the Chinese television hit series “Legend of Shaolin Temple” in 2006 and the film “The Kung Fu Master” in 2010. In 2017 he appeared in Yuen Woo Ping’s wuxia fantasy “Thousand Faces of Dunjia”, and continues to work to this day.

Kao Sau-leung, better known as Blackie Ko, plays “Darkie/Uncle G”, who Kung Wei befriends to infiltrate Po’s gang. Before his sad death at the age of 50, Ko worked on classics such as “Wheels on Meals”, “Heart of the Dragon”, “Yes Madam” and “Crime Story”, to name but a few, and is considered Asia’s greatest automotive stuntman. 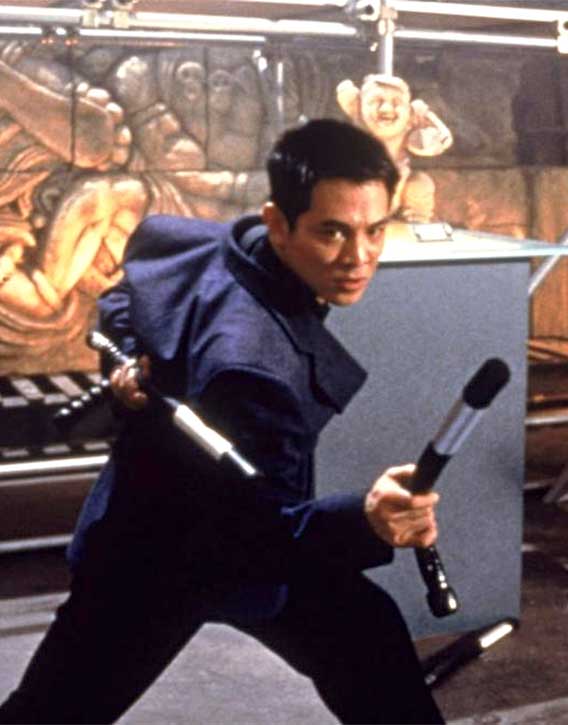 Damian Lau appears as “Inspector Cheng”. A popular television actor, Lau made his big screen debut in “Last Hurrah for Chivalry”. He would go on to appear in classics such as “Duel to the Death”, “Heroic Trio”, and “New Legend of Shaolin”.

Top Hong Kong action performers Collin Chou and Ken Lo get in on the action as gang members. Chou is probably best known for his roles in “The Matrix Reloaded”, “The Forbidden Kingdom”, and his superb turn as the bad guy in Donnie Yen’s “Flash Point”. Hong Kong action star Ken Lo, a former bodyguard to Jackie Chan, appeared in dozens of Hong Kong hit action films including “Drunken Master 2”, “Fatal Contact”, “Operation Mekong”, “Police Story 3: Supercop”, “Miracles”, “The Myth”, and many, many more.

Kung Wei is an undercover police officer who, in order to maintain his cover, is arrested in front of his wife and son. Kung Wei is imprisoned with Darkie, an underling of the lethal crime boss Po Kwong.

Escaping together, Kung Wei uses Darkie to infiltrate Po’s gang. Forced to prove his loyalty by taking part in a robbery, Kung Wei becomes a wanted criminal. With his mother’s health taking a turn for the worst, Johnny joins Inspector Fong in the search for his father. Kung Wei soon finds himself in over his head, and must rely on Fong and his son in order to survive.

It’s a little startling to see a chain-smoking Jet Li in the opening scenes, but it helps to establish his cool Hong Kong undercover criminal persona. The action gets underway almost immediately, as we cut between a Chinese wushu tournament and Jet Li fighting with some hatchet-wielding thugs. It functions as a good way to establish Xie Miao’s impressive wushu skills and a more contemporary style of fighting from Jet Li.

When you have someone as revered as stuntman Blackie Ko as part of your production, high octane automotive stunts are a given.

With the action shifting to Hong Kong, an extended shoot out in a glass panelled restaurant is initiated, with an impressive car crash through the windows. It also serves to introduce Anita Mui who gives off a Michelle Yeoh-style vibe as a tough detective.

There are plenty of skills that arent wire assisted

Xie Miao has an excellent sequence when he takes on several school bullies. The choreography allows the kids to perform at a level equivalent to their adult co stars, setting up a pay off for later in the story. Xie Miao and Anita Mui join forces to fight off a half dozen or so thugs at a harbour. Although occasionally doubled, both actors still perform a great deal of the high-kicking action themselves.

As the film builds to its conclusion, we are treated to some classic Jet Li action. He starts by fighting several opponents at a time with a pair of tonfas. Yu Rongguang has an innovative sequence where he disguises his kicks and punches by twirling his long flowing overcoat around them. The stakes are raised when acclaimed action performers Collin Chou and Ken Lo join the proceedings.

With Xie Miao coming to his father’s aid, although we are treated to some silky rope dart-style skills, the use of wirework is increased significantly. It’s a bit of a shame, as much of the preceding action demonstrates that the actors can deliver spectacular action without the aid of wires.

Kung Wei must hide his relationship to survive

“My Father is a Hero” is a great showcase for the growth, in depth, of Jet Li’s acting.

Admirably for Hong Kong action film, the drama is treated with equal care to the fights and stunts. It’s a rare thing for a movie like this to not tip over into saccharine-drenched melodrama. The authentic emotional connection helps to make the scenes between the action a little more palatable than you might expect.

A lot of credit goes to Anita Mui for carrying the drama so majestically. Although better known for his stunt work, Blackie Ko gives a good account as Darkie/Uncle G and it’s nice to see him in a larger role for once. With his sharp haircut, black coat, white gloves and sunglasses, Yu Rongguang looks like he positively relishes playing the bad guy.

For Jet Li fans this film is something a little different that allows him to stretch out a little farther in the acting stakes, but also featuring some slick contemporary fight scenes.

Renamed The Enforcer for the US market

Johnny doesnt know his father is an undercover cop

Do you remember “My Father is a Hero” from some 25 years ago…? Would you rank this among your favourite Jet Li movies or do you prefer his more historical roles? Let us know in the comments below; Like, share and join in the conversation on Facebook and follow us on Twitter & Instagram.

Now it’s 2020, think; was your Father your Hero? Well, take your turn LIKE A BOSS IN 2020, IT’S YOUR TIME to be one! For inspiration, check out the FU-niverse for exclusive interviews, Top 5’s, Top 10’s, get KFK’d in 2020 in the right gear, and subscribe for more action on YouTube too!)