Making it’s UK debut on Blu-ray from a stunning 4K HD restoration, comes acclaimed director Johnnie To’s no-holds-barred judo-action drama. It features an all-star cast that includes Louis Koo, Aaron Kwok and Tony Leung Ka-fai. The film releases on 18th May, and you can order your copy now from Eureka Entertainment and Amazon!

Hong Kong superstar Louis Koo plays “Sze-to Bo”, a former Judo champion. Koo has forged an impressive career in an eclectic collection of roles ranging from Johnnie To’s “Election” and “Drug War”, through to thrillers such as “Connected”, “Overheard”, “The White Storm”, the “All’s Well That Ends Well” comedy series, and of course, supporting roles in the martial arts films “Call of Heroes”, “Flash Point”, “Rob-B-Hood”, and “SPL 2: A Time for Consequences“. He won great acclaim and several Best Actor awards for his electric performance in third film in the SPL/Kill Zone series, “Paradox”.

He has appeared in the movies “2000A.D.”, “Saviour of the Soul”, “Future Cops”, “The Bare Footed Kid”, “The Storm Riders”, “China Strike Force”, “Divergence”, and as Sun Wukong in “The Monkey King” trilogy of films.

Tony Leung Ka-fai plays “Lee Ah-kong”, an old rival of Bo’s. As one of Hong Kong’s most popular actors Tony Leung has moved comfortably between action, comedy, martial arts and drama. He has had notable roles in “Bodyguards and Assassins“, “She Shoots Straight“, “New Dragon Gate Inn“, “Ashes of Time”, “The Myth”, “Detective Dee and the Mystery of the Phantom Flame”, “Election”, and “Rise of the Legend“.

A popular supporting actor in film and television, Eddie Cheung Siu-fai plays “Brother Savage”, a gang boss and money lender. He has appeared in films such as “The Bare Footed Kid”, “Running on Karma”, “Election 1 & 2”, “Fatal Move”, “Connected”, “Vengeance”, “Drug War” and “Three”.

Mainly known in Hong Kong for his television work and supporting appearances in Johnnie To’s films, Lo Hoi-pang plays Bo’s mentor, “Master Cheng”. Fans may recognise him from his roles in “Iron Fisted Monk”, “Drug War”, “Rigor Mortis”, “The White Storm”, “Firestorm”, “Iceman”, and “Three”, to name but a few.

Many of the fight scenes were performed on concrete

Once hailed as the “Golden Boy of Judo”, Sze-to Bo suddenly quit his sport with no explanation. Now depressed and an alcoholic, he spends his time gambling, drinking, and running a lounge bar, whilst trying to pay off his debts to Triads.

Mona, a young girl from Taiwan who dreams of becoming a famous singer, is trying to evade being forced into prostitution by her seedy manager, and takes a job singing in Bo’s bar. Cocky young judo champion Tony admires Bo’s reputation as a judoka, and aspires to beat him in a bout. Bo’s long-time rival, Lee Ah-kong also wishes to challenge Bo to compensate for an old, unfinished competition.

Bo, Mona and Tony team up as a musical act in the club in the evenings, and also combine to try ripping off money lender Brother Savage, to overcome their various obstacles in life.

Bo’s mentor Cheng is old and frail and has a dementia-ridden son, Ching. Wanting to save his gym, which is in disrepair, Cheng asks his former disciple to help him restore the reputation of his dojo. With events starting to run against him, Bo eventually reveals the secret reason he gave up judo. As his mentor’s health declines, and his bond with Mona and Tony grows stronger, Bo rediscovers the fighting spirit of his judo training, and begins to make amends.

A sweeping wide shot of a judoka practising a kata on a windy night in long reeds, whilst his coach sings a mournful song, sets a stylish, moody tone for this drama. Cut to the neon-lit streets of Hong Kong, and Aaron Kwok swaggers in as the cock-sure Tony, who challenges a giant of a doorman to a wager that he can knock him down. His silky judo skills are captured in equally silky slow motion. Later, Tony has a messier, judo equivalent of a street brawl, as he wrestles his opponent on the ground in an alleyway.

Director Johnny To injects a little of the darker side of Hong Kong, with a tense introduction in a dingy amusement arcade to the Stanley-knife favouring gang boss, Brother Savage. Out on the steep, hilly streets, Tony is desperate to prove his skills against Bo, and attacks him with his judo.

Bo offers no resistance as he is repeatedly thrown to the concrete. Incredibly, the accompanying “Making of” featurette reveals that To made them do this for several takes on real concrete in order to capture authentic pain and exhaustion in their performances.

When our trio are faced with their respective antagonists in a nightclub, it inevitably leads to a mass brawl. Ching sings his mournful song as bodies are smashed down through tables, chairs and onto concrete floors.

Despite the cool lighting and smooth slow motion, the action feels gritty and painful. Tony Leung steps in as Kong and he fights with much more sophistication, neatly arm locking and throwing his opponents.

When Kong fights Tony in a dojo setting, it looks like actual judo practice, and not an intricate, heavily choreographed fight à la John Wick.

When Bo and Tony do come to blows there is an interesting mix of punches, kicks, throws and grappling. The fighting is kept on the simple, more realistic side of things, but it is interesting to note that this choreographic style predates Wu Jing‘s “Fatal Contact” and Donnie Yen‘s “Flash Point” by a good couple of years.

The finale plays out in the long reeds of the opening frames, revealing that Bo was the judoka practising his forms. Although it is filmed almost entirely in slow motion, there is something swift and powerful about the judo techniques employed.

The spirit of judo is evoked by the learning experiences of the three leads, about the importance of perseverance and the redemption that can bring, rather than any material rewards. Losing a fight is a lesson learned, and if you are thrown down, fight on. 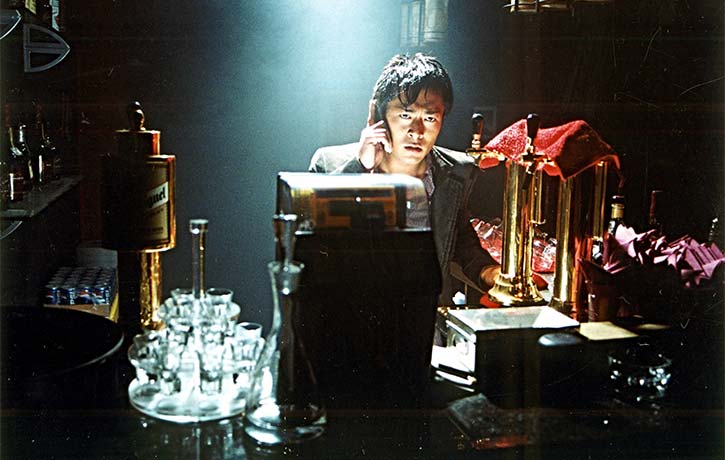 Bo is in debt to the Triads

Taking inspiration from the hugely influential Japanese director, Akira Kurosawa, Johnnie To shoots many scenes in long, wide, uncut takes, with little-to-no dialogue, or even much physical movement. He also likes to set up intricate, dramatic or humorous situations with neat pay offs. A scene with the three leads at three different tables, simultaneously discussing their individual problems with various antagonists, is astonishingly put together and edited. Also look out for the hilarious toilet cubicle sequence!

Louis Koo’s character is not a likable one, and the audience will initially feel little sympathy for him. Nonetheless, he delivers an engaging performance and it made me want to see where Bo would end up. The stand out performance is Cherrie Ying as Mona, a girl who puts on a confident front but is really rather fragile underneath.

Eureka have once again produced an excellent package, that includes an informative booklet with an essay on the origins and influence of Kurosawa’s movie “Sanshiro Sugata”, on this film and many others.

Tony has a messier judo equivalent of a street brawl

Extras include separate commentaries from Frank Djeng and Ric Meyers, and an interesting “Making of” feature that reveals that many of the judo throws were performed on concrete without stunt doubles. A detailed interview with Johnnie To reveals his process with the actors and how he teased out performances from each of them. He also reveals his admiration for the acclaimed Japanese director Akira Kurosawa, and how it influenced the way he portrays the themes and philosophies in this film.

Although Johnnie To has had many commercial successes, this film is unlike any of them. It is an almost noir-ish tale of how friendship can grow in adversity, and how redemption can be found by trying your hardest in life, even if you fail to achieve a goal or dream. The judo scenes are absorbing and deliberately avoid the frenetic, pulse-pounding style of a typical action film.

For fans of Asian cinema, this is one movie to sit back, soak up the beautiful visuals, take in the performances of the cast, and enjoy!

2nd from right director Johnnie To celebrates with cast and crew

Throw Down is almost film noir

“Throw Down”, Johnnie To’s no-holds-barred, noir-style action-drama releases on 18th May, and you can order your copy now from Eureka Entertainment and Amazon!

Do you remember “Throw Down” from some 16 years ago? What are your impressions of it from the fight clips above? Which other hidden Hong Kong or other Asian martial arts classics would you love to see restored? Let us know in the comments below; Like, share and join in the conversation on Facebook and follow us on Twitter & Instagram.

WANT TO ‘THROW DOWN’? Then WE WELCOME YOU to the FUniverse of news, Top 5’s, Top 10’s, deep-dive interviews, Throw Down your best moves in KFK Official gear and subscribe to grapple with more tactical, grounded fight action on YouTube!