Perhaps surprisingly, Andy Lau was not a martial artist as such, prior to his acting career beginning when he joined TVB (Television Broadcasts Limited – A TV Broadcaster in Hong Kong).

When Lau started the artist training program organised and run by TVB, he started to learn a mix of skills, including acting, singing, presenting, martial arts and fight choreography.

Lau trains hard before each of his roles and specifically focuses on what is required for his latest role. In preparation for “Shaolin”, he spent 2 months studying Shaolin Seven Star Boxing on a daily basis, including a few days’ study in Hong Kong under Reverend Yongzhi (who had never taught anyone outside of the Shaolin premises before). 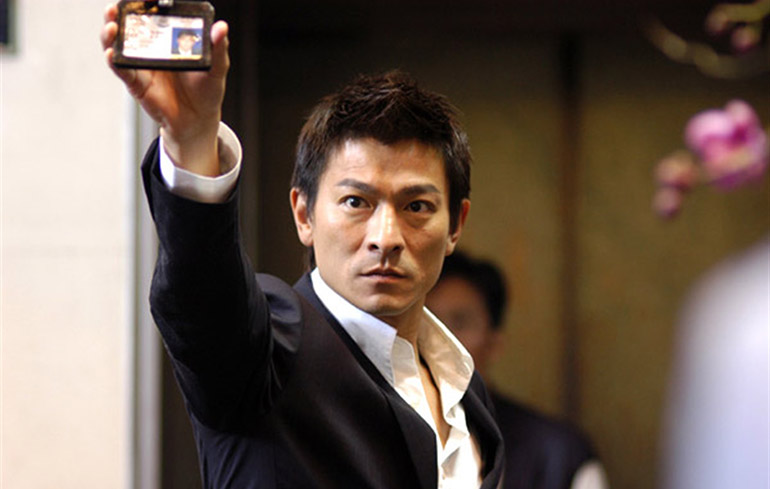 Here is my ID! – Infernal Affairs

Lau was raised in a poor area which did not have running water and he had to make daily trips to fetch water for his family. Even though the family was poor, education was encouraged and he graduated from college in Kowloon.

Successfully applying for the artist training program offered by TVB, Lau started his training and his career. The training academy at TVB involved a wide variety of training for the entertainment industry and lasted over a year. While training, Lau also started to perform in their TV series, including fight scenes. While Lau has limited classical martial art training, he has mastered performing choreography.

The TVB classes were full-day classes (Monday to Friday – like a normal school). They started in 1971 for the purpose of training acting talent and initially they were a collaborative effort with Shaw Brothers Studios. This joint effort lasted until 1979 and at this point TVB started to run the classes on their own.

During the year there were various examinations and tests that the students had to pass, and Lau had to pass all the tests to complete all the courses. Lau successfully graduated the academy and progressed to become a TVB artist.

After appearing on television for a year, Lau moved into films and in 1983, landed his first leading role in a Shaw Brothers film – “On The Wrong Track”.

The majority of Hong Kong actors get doubled during their career and Lau, with his limited martial arts training was often doubled in his early career by Chin Kar-lok. There is a documentary called “Cinema of Vengeance” in which behind the scenes footage of “Moon Warriors” is shown, displaying Kar-lok doubling Lau. Ridley Tsui has also doubled for Lau, performing somersaults in “God of Gamblers 2”. While most Hong Kong actors have been doubled at various points in their career (Jackie Chan, Donnie Yen, etc), they also tend to do more of their own stunts and action scenes, including wire work, pyro work, etc, and Lau has performed a number of his own stunts.

During the 1980’s Lau worked in both television and film, becoming a very popular actor and leading man. In 1985 Lau also found time to start his musical career and has released over 50 albums since then -including 5 albums in 1991 alone! – winning many awards in the process. He is featured in the Guinness World Records for ‘Most awards won by a Cantopop Male artist’. Tak-wah performed with Jackie Chan when they sang together during the closing ceremony of the 2008 Summer Olympics, and also during the Paralympics Opening Ceremony of 2008.

In action in Firestorm

In the late 1980’s, Lau faced contract issues with TVB as they wished to secure a 5-year exclusive contract. Lau declined to sign and started to focus on his film career.

Lau appeared in a music video in 1981, which lead to him being spotted and offered a minor role in the 1981 film “Once Upon a Rainbow”. This in turn lead him to a role in the 1982 film “Boat People”, and in 1983 he secured his first leading role (as mentioned above) in the film “On the Wrong Track”.

Lau would appear in two to four films per year during the early to mid-1980’s, then in 1988 he concentrated on his film career landing roles in 10 films. Tak-wah would follow this in 1989 by appearing in 16 films. He went onto act in many films each year and has now been in over 100, and been the star in large proportion of them.

Andy and Jackie having a chat in Shaolin

Lau has featured in many films popular in both the East and the West, including “Infernal Affairs”, “House of Flying Daggers”, “The Warlords”, “Detective Dee: Mystery of the Phantom Flame”, “Blind Detective” and “Shaolin”.

Looking out for those daggers in House of Flying Daggers

Under attack in Firestorm

From Vegas to Macau poster 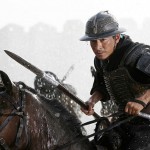 Horse riding in Three Kingdoms Resurrection of the Dragon

Another gun pointed at me Infernal Affairs