Popstar and actor Aaron Kwok stars as “Peter Li”. Kwok’s long and successful singing career has seen him considered as one of the “Four Heavenly Kings” of Hong Kong, that also includes Jacky Cheung, Andy Lau and Leon Lai. He has appeared in the movies “Saviour of the Soul”, “Future Cops”, “The Storm Riders”, “China Strike Force”, “Divergence” and as Sun Wukong in “The Monkey King” trilogy of films.

Daniel Wu stars as “Bobby”. Wu was born and raised in California, and studied wushu from the age of 11. His breakthrough role came in the Benny Chan-directed “Gen-X Cops”. He appeared in Teddy Chen’s action thriller “Purple Storm” and received acclaim for his performance in “One Night in Mongkok” and as the villain in Jackie Chan‘s “New Police Story”. In 2015 Wu took the lead role in the martial arts action television series “Into the Badlands”.

When a private jet is shot down over Singapore, computer whiz kid Peter becomes embroiled in a plot by his brother to steal a computer virus that can control financial and military systems. Suspected of being a rogue CIA agent, Peter is pursued by the military intelligence services and the Hong Kong and Singaporean police forces, as well as the would be hi-tech thieves.

Peter has no-one to trust but his closest friends in an explosive and deadly race to find the “Caller Program”, which can wipe out entire Stock Exchanges with the click of a mouse.

It is obvious from the opening sequence of an aircraft being shot down over a picturesque night time Singaporean cityscape, that the filmmakers are trying to give this movie a Hollywood-style, big-budget sheen. It partially works with some excellent model-effects shots occasionally giving way to slightly lower-end CGI.

The movie then takes the best part of 40 minutes to explain a rather convoluted “Millennium Bug/Computer Virus” plot (very popular at the turn of the 21st Century!) and establish the main, fairly clichéd characters.

As our heroes become embroiled in the conspiracy, the initial action features SWAT-style shootouts and raids on apartments, eventually building to an exhilarating chase on foot through the streets of Hong Kong with Aaron Kwok and Ken Lo. When they finally confront each other, a rough and ready fight in a back alley ensues. Nothing too stylish but they do sell all the hits giving them real power.

Bobby and Peter Li introduce themselves to Eric Ong with a short but sweet hand-to-hand duel. In among a couple of flashy kicks there are some nice elements of Wing Chun and Chin Na.

One of the action highlights involves a vehicle ambush in a multi-storey car park leading to an extended tense and bloody shootout. Coming across more “Lethal Weapon” than John Woo, there is plenty of machine gun fire spraying the surrounding vehicles, concrete walls, and participants.

The stakes just keep getting higher

An exhilarating chase through the streets of Hong Kong

Ken Lo and Aaron Kwok are rough and ready 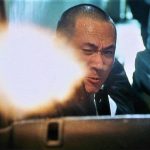 The tense shootout is more Lethal Weapon than John Woo

There is a fairly generic car chase through the streets of Singapore that is made remarkable by the mayhem and destruction it brings to the famous marina area. I’m not sure I have ever seen Singapore portrayed in such a chaotic depiction of wanton destruction!

A  high-kicking stairwell fight leads to a showdown on the roof of a skyscraper overlooking Singapore. Aaron Kwok & Andrew Lin can certainly move well with some flexible kicks and swift timing in the best choreographed fight of the movie.

The credits play over behind-the-scenes footage of the film being made showing the stars performing much of the action themselves.

I was a little shocked that this was directed by Gordon Chan of “Fist of Legend” fame. Some of the action is certainly stylishly shot, but there are some very strange cross fades and editing choices. Special effects range from looking like a Hollywood blockbuster to low budget CGI.

The acting performances are on the whole pretty good, and when the action set-pieces do come along, they are all well-staged and exciting. Ken Lo is particularly cold-blooded as an assassin.

The computer-heist plot seems very dated now and this film never seems to make up its mind if it’s an Asian action film, or a Hollywood thriller film in the mould of something like “Enemy of the State”. As such, it mostly fails to reach the heights of either style.

A reasonable if bland hi-tech thriller that features a sprinkling of Hong Kong stunts and action, it is worth watching at least to see Aaron Kwok kick some butt!

The Singapore Air Force cooperated with the filmmakers

Daniel Wu gets in on the action

The stars actually fought on a skyscraper rooftop

Mayhem and destruction in Singapore

Do you remember this title from 18 years ago? What was your fave action scene and what do you think “3000 AD” would look like? Let us know your top fight-action films from the noughties in the comments below. Want to help keep kung fu flicks alive and kicking? Hi-5 us with a LIKE and by sharing this with your friends and joining in the conversation on Facebook. You can also follow us on Twitter & Instagram!