Donnie Yen might have reached the finale recently, but Ip Man begins in this Hong Kong martial arts film based on the early life of the famous Wing Chun grandmaster, starring Dennis To in his first lead role. Although not connected with Wilson Yip’s “Ip Man” movies starring Donnie Yen, “The Legend is Born” features several actors who appeared in those films, including Sammo Hung, Louis Fan, and Chen Zhihui. The film also features a special guest appearance by Ip Chun, the son of Ip Man.

Former World Wushu Champion and Asia Games medallist Dennis To Yu-hang stars as a youthful “Ip Man”. Although To had played minor roles in Donnie Yen’s “Ip Man 1 & 2” and “Bodyguards & Assassins”, this was his first major role.

He is the son of Fan Mei-sheng, a long-time Shaw Brothers actor, who famously stepped in to play the drunken “Beggar So” in “Magnificent Butcher“, after Yuen Siu-Tien sadly passed away. From a young age, Louis often accompanied his father to work and made minor appearances in some of the movies his father acted in. When he was 14, his father sent him to Xuzhou, China, to learn gymnastics and wushu. He is probably best known for his lead role in the cult classic “Riki-Oh: The Story of Ricky”.

Action legend and member of the famous Seven Little Fortunes opera troupe, Yuen Biao appears as “Ng Chung-sok”, Ip Man’s senior master. Working initially as a stunt actor and double in films such as Bruce Lee‘s “Fist of Fury” in the 1970’s, Biao became a leading Hong Kong action star in his own right with roles in the movies “Knockabout“, “The Prodigal Son” and “The Iceman Cometh“. He saw his greatest successes starring alongside his “opera brothers”, Sammo Hung and Jackie Chan, in the “Lucky Stars” movies as well as the hits “Project A“, “Wheels on Meals” and “Dragons Forever“. 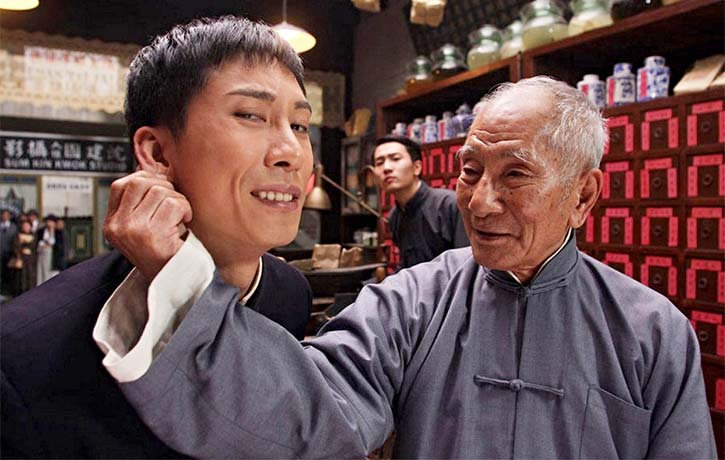 As a child, Ip Man learns Wing Chun from Master Chan Wah-shun together with his adopted brother Ip Tin-chi and their best friend, Lee Mei-wai. After Master Chan passes away, Ip Man continues to learn Wing Chun from his senior, Ng Chung-sok, before eventually leaving Foshan to study in Hong Kong.

Upon Ip Man’s return to Foshan he is reunited with his friends and master. Although some are impressed with his new, unorthodox fighting skills, Master Ng Chung-sok believes he has disrespected the “authentic” Wing Chun style. As well as wanting to re-earn the respect of his master, Ip Man begins to court Cheung Wing-sing, the daughter of the vice-mayor of Foshan, whose respect he must also earn.

With the Japanese military tightening their grip on Foshan, Ip Man begins to discover that the loyalties he trusted the most in martial arts are being betrayed with tragic consequences.

The first action scene in this movie is a genuine treat. For the first time in fifteen years, screen legends Sammo Hung and Yuen Biao duke it out in a blindfolded Wing Chun duel. Although it may not be as spectacular as their fights of old, it’s a real pleasure to see these two treasures of martial arts choreography display the rhythm and movement that established them as a pair of the finest masters of their trade.

Dennis To’s first call to action sees him and two friends fighting off some troublemaking thugs at a street festival. Perhaps ironically, the main thug shows off some flashy wushu movements, only for To, a former real life wushu champion, to put him down with some simple and direct Wing Chun skills. It is reminiscent of the famous scene in which Indiana Jones shoots the swordsman in “Raiders of the Lost Ark”. Although a few flamboyant, wire- enhanced leaps and spins find their way into the choreography, there are plenty of genuine techniques that students of Wing Chun will recognise and enjoy seeing employed.

A recurring theme in many Chinese martial arts films set in the early 20th century is the oppression from foreigners. When an arrogant Englishman, played by British martial artist Andy Taylor, calls the Chinese students “sick men of Asia”, Ip Man steps up to teach him a lesson. It’s a brief scene but again emphasises the Wing Chun style.

Not the Sick Men of Asia

Another treat is delivered by a very special guest star. Ip Man’s son Ip Chun appears as Leung Bik, a real life Wing Chun master famous for teaching Ip Man. Although in his mid-eighties at the time, Ip Chun handles the choreography incredibly and can certainly perform at least as fast as his much younger co-star. It does look like he is doubled for some of the fancier footwork but there is no denying his hand-to-hand combat skills.

Following a debate about “what is authentic Wing Chun?” the story establishes that Dennis To’s Ip Man is now trained in a broader range of kung fu techniques. This is reflected in the choreography with cartwheels and high kicks tied into the chain punching. The flamboyance is cranked up even further when Louis Fan defends the honour of the Jing Wu school against some stereotyped Japanese bad guys (and girl!).

To initiate the big finale it is Yuen Biao who leads the way, showing he can still boss a fight scene. The big fight between Dennis To and Louis Fan is a slightly unbalanced mix of Wing Chun, high kicks, wire work and ground work, but still manages to entertain.

Dennis To plays the part of a young, fresh-faced, and good-natured martial arts student perfectly. He certainly looks more like the real Ip Man when compared with other actors in the role such as Donnie Yen (Ip Man), Anthony Wong (Ip Man: Final Fight) or Tony Leung Chiu-wai (The Grandmaster).

Perhaps belying a smaller budget, this is not as slick as Wilson Yip’s films, although the period setting still looks good. There are some nice action-free moments between Dennis To and Huang Yi especially a scene when they go to see a vampire movie at the cinema, and when Ip Man visits Wing Shing’s father to earn his respect.

After an initial interesting first half that paints an entertaining portrait of the growth of Ip Man into a noble and educated master, and raises the debate over the nature of authenticity and evolution in martial arts, the second half descends into a plot more akin to a low budget Chinese soap opera. This doesn’t detract from the fight scenes however, which maintain a decent standard throughout. Although I felt the wire work was occasionally distracting, for the most part, the choreography is slick, well-performed and entertaining.

Whilst perhaps not quite hitting the heights of Donnie Yen’s hit films (to which a title like this will always be compared), this is still an enjoyable contribution to the genre and one of the better Chinese martial arts films of the new millennium to receive a release in the West.

What did you think of “The Legend is Born: Ip Man”, from some 10 years back? How do you feel it compares to other kung fu films featuring Ip Man? Would you like to see Dennis To reprise the role now that Donnie Yen has given up the mantle? Let us know in the comments below; Like, share and join in the conversation on Facebook and follow us on Twitter & Instagram.

If you’re an Ip Man fan, be sure to check out our review of Ip Man 4: The Finale, and interviews with star performers Sifu Chris Collins and Scott Adkins!

Keep your Wing Chun flying high in the FU-niverse with these reviews, Top 5’s, Top 10’s, get chain-punching in the right gear, and subscribe for more close-up combat action on YouTube too!