Louis Fan Siu-wong stars as our hero “Ricky Ho”. Louis has made notable appearances in “Ip Man“, “Ip Man 2” and “Kung Fu Killer“. He is the son of Fan Mei-sheng, a long-time Shaw Brothers actor, who famously stepped into play the drunken “Beggar So” in “Magnificent Butcher“, after Yuen Siu-Tien sadly passed away. From a young age, Louis often accompanied his father to work and made minor appearances in some of the movies his father acted in. When he was 14, his father sent him to Xuzhou, China, to learn gymnastics and wushu. Louis’s father appears alongside him in “Riki-Oh” as “Assistant Warden Dan”.

Yukari Oshima plays “Huang Chung”, one of the Four Heavenly Kings that Ricky has to fight. She is a Japanese actress and martial artist. who gained prominence in Hong Kong action movies in the 1980’s and 90’s. She became one of the leading ladies of the “babes and bullets” fad of Hong Kong action cinema, starring in films such as “Millionaire’s Express”, “Iron Angels”, “The Avenging Quartet”, and “Outlaw Brothers”.

Gloria Yip Wan-Yee plays Ricky’s girlfriend “Keiko”. She is best known for her supporting roles in “The Peacock King” opposite Yuen Biao, Jackie Chan’s “Miracles” and as Andy Lau’s sister in “Saviour of the Soul”.

The latex effects are laughable

The final showdown tries to out gross all before it

In an alternative year 2001, all prison institutions have been privatised. Ricky Ho, a martial artist and former music student, is sentenced to ten years in prison after killing a gangster who was indirectly responsible for the death of his girlfriend Keiko.

The prison is ruled by the sadistic, one-eyed, hook-handed Assistant Warden Dan and the fearsome Gang of Four Heavenly Kings.

Ricky soon discovers that the Gang of Four are manufacturing illegal drugs for profit. The scene is set for Ricky to use his superhuman Qigong martial arts against his rival inmates and the Four Heavenly Kings. And when the evil Warden returns to the prison, he uses them for possibly the bloodiest, goriest, showdown ever seen in a martial arts film.

The style of the action is set down pretty quickly. In the prison bathroom, an elderly inmate is viciously beaten and has his nose “planed” off by the captain of the cells, Samuel. As Samuel leaves, Ricky trips him, and Samuel falls on a piece of wood with nails on it, impaling his hand, face and eyeball.

As is the norm for action films set in prisons, Ricky is attacked in the showers by the gargantuan Mad Dragon. Louis Fan as Ricky is in impressive shape, with his muscular torso exposed in nearly every scene of the film. The fight doesn’t last long as Ricky punches literally through Mad Dragon and his accomplice’s stomachs.

After a brief dust up in Assistant Warden Dan’s office, Ricky fights the burly, tattooed Oscar in the prison yard. This is one of the more notorious scenes from the movie, involving Ricky treating a cut to his arm by pulling out the veins and tying them up, his opponent having his eyeball popped out, and the infamous “using his own intestines to garrotte his opponent” sequence.

When Yukari Oshima arrives, we start to get some proper, albeit brief, martial arts combat. Yukari and her needle-dart throwing friend take Ricky on in front of a blazing building. Yukari has impressive kicking and punching skills, whilst Ricky ties himself up, rope-dart style.

Ricky starts to feel the burden on his shoulders

A huge henchman called Tarzan attacks Ricky in his cell. Tarzan’s limbs, fingers and jaw are graphically and brutally broken by Ricky.

Whilst a full scale prison riot breaks out, Ricky fights his way to the kitchen to confront the evil Warden. In probably the best action sequence of the movie, we get another small taste of Yukari Oshima’s excellent movie-fighting skills, before she too is dispatched in a splash of fake blood and latex limbs.

The concluding fight with a mutated Warden has some flips and falls from Ricky before the movie goes for the full gross-out finale, which involves a meat mincing machine and a torrent of theatrical blood. 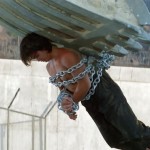 Ricky needs to dig himself out of a hole

Ricky must fight the inmates and the guards for survival

Many friends who are Hong Kong movie fans have admonished me for having never seen “Riki-Oh: The Story of Ricky” before now. When I was asked to write a review, I thought I would be in for a B-movie treat.

I have enjoyed the silliness and gore of a film like “Evil Dead”, laughed ironically at the ridiculous set-pieces in the “Sharknado” series of films, and marvelled at the almost operatic level of violence in action films such as “The Raid” and “Rambo”. But “Riki-Oh”, for me personally, was…… awful.

The gore is way over-the-top with very cheap and obvious rubber latex and prosthetic effects. Seeing someone trying to garrotte their opponent with their own intestines just left me cold. The make-up effects are so rubbish it didn’t shock, and the concepts like an unfunny cartoon. Creative dismemberment of human bodies does not cause laughter by default. The plot was non-sensical, the humour forced, and the acting so poor you can see Louis Fan trying not to laugh in a scene with his dad. I was shocked to discover the director is a former Cinematographer. Obtuse angles are used for no good reason, and the editing and film direction in general are pretty poor.

In the plus column for the fans, the picture and soundtrack options for this release by Medium Rare are of superb quality, reminiscent of the exceptional Hong Kong Legends releases. There are some Bonus Features including an excellent demonstration of wushu by Louis Fan performing Changquan and Jianshu, as well as an entertaining interview with the star himself. Based on these extras alone, it makes you wonder why Louis Fan isn’t a bigger star in his own right. He certainly has the skills. Apart from one or two scenes (especially the fights with the woefully underused Yukari Oshima), it is a crime they weren’t utilised to greater effect during this film.

Louis Fan took days to wash off all the fake blood

The Audio Commentary by Hong Kong stunt performer Jude Poyer and critic Miles Wood, has one or two interesting titbits about the notoriety of the film, and some good insights from Jude about the processes involved in filming some of the action scenes. They also reveal that Louis Fan himself regards this film as a stumbling block in him NOT getting better leading roles that might have led to him becoming a bigger action star.

To summarise then, some films are so bad that they are good, in an ironically entertaining way – you laugh at the film, rather than with the film. Some are deliberate spoofs, and if you recognise what is being spoofed, they can be entertaining and very funny (“Kung Fury” springs to mind). I think a lot of fans of “Riki Oh: The Story of Ricky” love it because it is so bad, it is so over-the-top, as one of the goriest films you’ll ever see -now that is pretty unique!

If you like films such as Peter Jackson’s “Braindead”, or laugh at the awfulness of something like “Human Centipede”, you will LOVE “Riki-Oh”, laugh like a hyena, and you can probably take a score of 8 out of 10 away from this review.

Personally, it is three hours of my life (I watched it a second time with the audio commentary) I will never get back. I feel like I am mentioning “the elephant in the room” that this is a daft movie, because this film does have it’s fans. I am not one of them, however.

For the restoration job and DVD extras: 8/10