Action wasn’t really…er, actiony for the longest time. At least, not until later on in the years of cinema. Comparing what you see nowadays in “The Raid 2” for example, is a far cry from the fencing featured in the early silent films and “talkies”. When action started to touch the cusp of what it is today however, the changes did start to come in radically fast.

What has come about within the last few decades would not be possible without first having the foundation built from the preceding centuries. One of the major driving forces for action cinema, Hong Kong cinema, has a particularly rich history that leads directly to the current day holding the guiding gems of action wisdom and practical skill within its archives as a torchlight of hope for the future. Let’s zoom forward in time to understand and appreciate where we are today in a History of Fight Choreography – Part 2: The Kung Fu Connection!

While the history of the popular samurai film genre was steeped in Kabuki theater, the beginning of Hong Kong cinema was rooted in a different school of performance: Peking Opera (also called Beijing Opera). Though Chinese Opera as a whole has been around a long time, the unique Beijing blend of acting, singing, and acrobatic performance seen nowadays didn’t come surface until much later.

It is commonly agreed that Beijing Opera can trace its roots to a birthday party. A very big birthday party at that. The year was 1790, the middle of the Qing dynasty, and emperor Qianlong was celebrating his eightieth birthday—though he was born only seventy-nine years ago from the date, keep in mind the ancient Chinese counted age slightly differently. 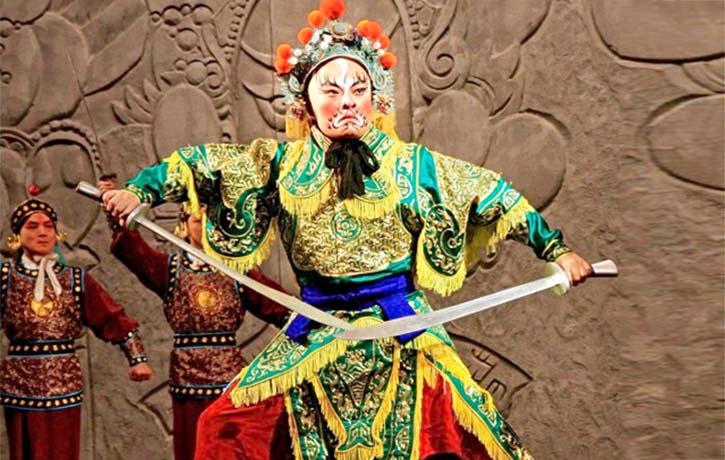 Beijing Opera brings the fight on

To help celebrate, southern officials sent the Sanqing Opera Troupe from Anhui to perform in Peking. Soon after, three more Anhui Opera troupes—the Sixi troupe, the Chuntai troupe, and the Hechun troupe—set out to bring their talents to the capital as well. While each had their specialty, it is said that the Hechun troupe were the ones renown for their fighting performances.

After performing for the emperor, the troupes found great success in the capital and were allowed to stay in order to continue providing entertainment. While at first these performances were reserved for royalty, the troupe became more well-known and the public was later introduced to their shows. In 1828, famed Hubei theatre troupes came to Peking and, sharing the same Lower Yangtze Mandarin dialect, began sharing the stage with the Anhui troupes.

After many years, the various styles began to meld into what is now regarded as Peking Opera (alternatively titled Beijing Opera, reflecting the new name adopted by the Chinese capital). These shows were, and still are, something spectacular to behold. Filled with smartly colored characters and acrobatic choreography, many of China’s artistic treasures are on display with each show: beautiful painting, operatic singing, theatric “kung fu” skills, and much more.

Much like Japanese Kabuki, Peking Opera would go on to have a massive impact on cinema as well. The fighting found in Chinese movies was often based on the aesthetic movements found on the opera stage. Appropriately, when boarding schools for Peking Opera came about, tons of famous action choreographers and stunt performers sprouted from them.

Jackie Chan another of the 7 Little Fortunes

Yuen Biao among the 7 Little Fortunes

A prime example of this is the famous China Drama Academy, a Peking Opera school based in Hong Kong and founded by northern kung fu practitioner Yu Jim-yuen (who was portrayed in the film “Painted Faces”). Known as a stern teacher and a father figure whose students would adopt his family name, he would go on to raise Jackie Chan, Sammo Hung, Yuen Biao, and many more modern action stars and actors.

Over time, many movies were made depicting the life of martial artists and folk heroes, eventually becoming a movie genre in and of itself. The fight scenes in these films grew more important as the focus shifted to these heroes with legendary skills. It was also around this time that the usage of green screen hidden wires, used to depict supernatural abilities in cinema, grew popular, naturally complimented by the limber and acrobatic nature of the Peking Opera stars.

Around the 1970’s, the massively successful film studio Shaw Brothers Studios—iconic with their Warner Brother’s-influenced shield logo—started doing their movies differently than the rest. Already an established film studio with many successes under their belt, they began to look for ways to do things differently.

Drawing inspiration from the gorier Samurai movies being made in Japan as well as their respective staff (many of whom came from Toho Studios, the same studio that brought the world Godzilla and Akira Kurosawa’s “Seven Samurai”), they began to focus on a more visceral experience with their films. The Japanese influence brought changes such as mid-fight zooms followed by a crash shot, near cartoonish amounts of gore, blood as a cinematic device, and low angles.

Even in all of these action films, the action wasn’t the same as what you see nowadays. It wasn’t until a certain Hong Kong action star kicked his way onto the big screen that these on-screen fight scenes were revolutionized into what it is today.

Bringing on The Modern Fight with Bruce Lee

Up until Bruce Lee came along, most fight scenes had a stilted rhythm, with even Hong Kong cinema fights still carrying on the metronomic movement of Peking Opera. It wasn’t until his 1972 film, “Fist of Fury” (titled “The Chinese Connection” in the West) that things started to change. His fight scenes showcased a new, more realistic kind of fight while still keeping it stylized for cinema. His fight opposite Robert ‘Bob’ Baker in the film integrated feints and seemingly live reactions based on emotions like fear. The fight was, to say the least…captivating!

The following years showed action stars and filmmakers trying to recreate Bruce Lee’s combat charm, however, it was a performance that most failed to properly replicate. Movies would often bring in the energy shown in “Fist of Fury” but then lose out on the complexity that made it appealing or would have the complexity but lack the raw energy and look way too obviously choreographed.

It wasn’t until the mid-1980’s that action began to more consistently balance those attributes. Donnie Yen kicked butt in “Mismatched Couples”. Jackie Chan had a dynamic face off against Benny ‘The Jet’ Urquidez in “Meals on Wheels”. Action just kept getting more and more fast-paced and adrenaline-inducing. Filmmakers were learning. Quickly.

The impact of Bruce Lee’s films continues to be felt to this day, inspiring many, many other martial artists, fight choreographers, and directors. Beyond that, many of those who were inspired by Lee have continued to find new ways to showcase action.

A Touch of Thai

A great example of this ripple effect is seen in the late Panna Rittikrai—a southeastern (Thai) action director whose proteges, including Tony Jaa and Marrese Crump, have been vigorously innovating in modern action cinema genre with full force.

Nowadays, you can find many examples of films and their respective action specializing in various martial arts. Films like “Ong Bak” and “Ip Man” are great examples, showcasing Muay Thai/Muay Boran and Wing Chun respectively (be sure to check out our favorite fight scenes from Ong Bak and Ip Man)!

On the opposite end of the spectrum, if a film features main stars without action skills, shaky camera movement and excessive shadows are often used to help disguise a lacking skillset to merely accentuate whatever is shown.

Another trait unique to modern times is access to the internet and the creation of social media. With roughly two billion active users, YouTube has become a very popular platform for content makers. This accessibility gives creatives the ability to make their own brand of action cinema, a chance they might not have had otherwise.

YouTube channels such as the popular Martial Club and Team Red Pro shine bright, without even needing the big screen as such. It is a very exciting time to be alive watching onscreen action and witnessing its evolution!

Who do you count among your martial arts action heroes from the modern era, is it Bruce Lee, Sammo Hung, Jackie Chan, Jet Li, Donnie Yen, JCVD, Michael Jai White, Tony Jaa, Scott Adkins, Iko Uwais…? Who do you think is the most influential character in terms of energetic action style and signature? Let us know in the comments below, join in the conversation on Facebook and follow us on Twitter and Instagram.

Find out how action has transformed down the centuries, with the correlation between the American Old West and Japanese Samurai films in Part 1 of this article! Meantime, keep your KUNG FU CONNECTION going with our in-depth reviews, Top 10’s, Top 5’s, deep-dive interviews, KFK Official gear and subscribe for more evolutionary action on YouTube!