With Donnie Yen recently announcing his apparent retirement from the martial arts film genre, it may be high time to take a look back at his sprawling career as one of Hong Kong’s greats. Donnie Yen has starred in and choreographed many films in his time with many varying scripts and premises that have seen him as a sword-wielding vampire, in war-torn Foshan, a time-traveling Ming Dynasty officer and even yep…a comic book character!

“Oriental Heroes” is a popular manhua (Chinese comic book) title by Wong Yuk-long that has been in production since 1970. Similar in vein to something like “Fist of the North Star” or “Kenichi: The Mightiest Disciple”, mystical martial arts are a central focal point of the series. The immense popularity of this comic with its fast-paced action and graphic fights helped greenlight a film adaptation titled “Dragon Tiger Gate” in 2006.

Shawn Yue, a recognizable face in Hong Kong cinema, is Turbo Shek, a fledgling martial artist who becomes embroiled in Tiger’s fight against the forces of evil. Yu Kang is the body for Shibumi, a villainous drug-dealing cult leader, while Louis Koo provides the voice for the character. Yuen Wah, whom many will recognize from his role as The Landlord in “Kung Fu Hustle”, appears as Master Wong, both of the boys’ father. Donnie Yen also served as the fight choreographer for the film.

Donnie Yen as Dragon Wongs got half the jade

Once upon a time, the Dragon Tiger Gate academy was founded by two powerful martial artists to train others and uphold justice against the Triad, while also providing a safe haven for children who have been orphaned by the Triad’s activities.

Behind the scenes, the Luocha Cult, a pan-Asian drug trafficking organization headed by a man named Shibumi, is the one really pulling the strings behind the Triad.

Dragon has a reflective moment

How is this fair

Dragon and Tiger Wong, sons of Fu Hu Wong (one of the original founders of the academy), end up on two separate paths in life when tragedy strikes and Dragon’s mother dies in a fire when both boys were still very young. The only thing she is remembered by is a jade pendant of which half is given to Dragon and the other half, to Tiger. Dragon ends up under the care of the Triad while Tiger is taken care of by his uncle.

Years later these two long-lost half brothers’ destinies collide through a ‘chance’ encounter and they must unite to defeat the ultimate evil once and for all, Shibumi!

Having Donnie Yen helm as fight choreographer, you can expect a certain level of finesse in the fight scenes with all the talent being put to good use.

Dragon is poised for mayhem

I could woop you both just sayin

Nevermind the hair a new player has entered the fray

All the characters execute blazing-fast strikes, a staple of Yen’s style.

Interestingly, this is before Yen had fully developed his main style of action. There are much more of the wire-assisted acrobatics found in the wuxia genre when compared to Yen’s later films such as “Flash Point” (2007), in which he incorporated aspects of MMA into the fights to create a more realistic and grounded style of action; something that would later become another iconic aspect of Yen’s style.

The level of detail in the choreography even helps convey just how different these two half-brothers are due to their chosen paths in life, as Dragon and Tiger are meant to be foils for one another.

Though Tiger Wong is supposed to be a master of kung fu, Nicholas Tse actually trained in Taekwondo for this film to execute many flashy, high-flying kicks. In fact, Tiger Wong almost entirely relies on kicks and his lower body in the many brawls he finds himself in. On the flipside, Dragon Wong relies mostly on his hands and upper body.

A plethora of melee weapons, sure to pique the interest of any martial arts fan are also on display; the staff, three-section staff, sai, guandao (Chinese glaive), the classic nunchaku – these and many more can be seen in action.

Look at the mess you made

Got a handful of Force 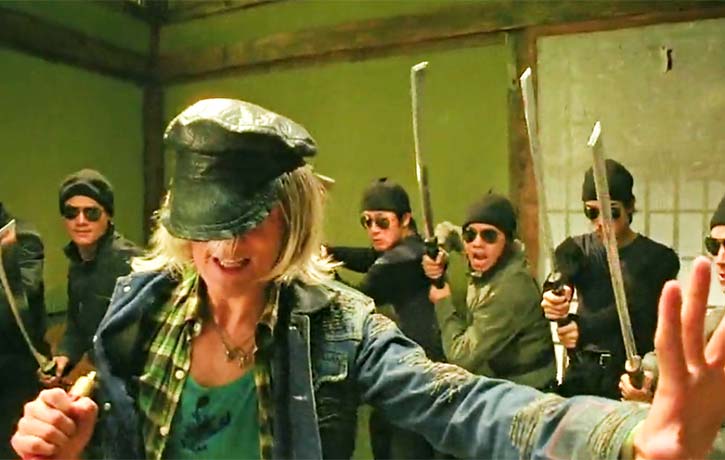 Nevermind the hair a new player has entered the fray 1

Though the tide of Donnie Yen’s career as a martial arts action star may have come in, there are plenty of superb fight action films to look back on, indulge in and enjoy from his long and illustrious career.

In “Dragon Tiger Gate” we get the chance to see him as a comic book character and all the high-flying absurdity that comes with it. The preposterous physics, the epic struggle between good and evil; all spiced up with martial arts action. It makes one wonder what could’ve been if, in an alternate universe somewhere, Yen was cast into mainstream Marvel films for example…y’know, just saying.

You must learn humility

Two masters get together

A warrior always stands against injustice

Its chaos in da house

Do you remember “Dragon Tiger Gate” from 14 years back? What did you think of the movie as a live-action adaptation based on the Hong Kong manhua comic title “Oriental Heroes” created by Wong Yuk-long? Which other fighting/combat comics do you think deserve to be made into a film?Let us know in the comments below; Like, share and join in the conversation on Facebook and follow us on Twitter & Instagram.

ARE YOU A DRAGON OR A TIGER? Either way channel your CHI and ENTER through the GATE of the FU-niverse for exclusive interviews, Top 5’s, Top 10’s, get yourself Offcially KFK’d and look the part, and subscribe for more roaring-firey action on YouTube!)