Shaw Brothers legend, Gordon Liu Chia Hui stars as “5th Son/Yeung Dak”. His breakthrough leading role in “The 36th Chamber of Shaolin” led to further memorable parts, often playing a shaven-headed kung fu master as either the hero or the villain. He appeared in two sequels to “36th Chamber”, as well as classics such as “Heroes of the East“, “Challenge of the Masters”, and “Legendary Weapons of China“. As the Shaw Brothers star dimmed somewhat, Liu remained active in smaller roles in films such as “Tiger on the Beat“, “Kill Bill“, “Dragon Squad“, “True Legend” and “The Man with the Iron Fists“.

A protégé of the famous director Chang Cheh, Alexander Fu Sheng stars as “6th Son Yeung Chiu”. His first lead role was in Cheh’s “Police Force”, leading to starring roles in “Heroes Two”, “Five Shaolin Masters”, “Shaolin Temple”, and the “Brave Archer” series. Fu Sheng was supposed to star in “Snake in the Eagle’s Shadow” but was refused by Run Run Shaw, head of the Shaw Brothers Studio. Jackie Chan was eventually cast in the role. He was unfortunately killed in a car crash midway through filming “The Eight Diagram Pole Fighter”.

Action Director and actor Lam Hak-Ming plays the treacherous “General Pan Mei”. A familiar face to fans of Hong Kong martial arts films since the 1960’s, he has appeared in everything from “The 36th Chamber of Shaolin” and Angela Mao-ying’s “Hapkido”, through to Jackie Chan’s “Police Story” and Jet Li’s “Born to Defend”. In recent years he has had small roles in Sammo Hung’s “The Bodyguard” and he played Master Lam in Donnie Yen’s “Ip Man 2”.

The prolific actor and director Phillip Ko-Fei is the noble “Temple Abbot” who also happens to be a highly skilled martial artist. He had been a stuntman in Bruce Lee‘s “Enter the Dragon” and appeared in movies such as “Secret Rivals 2“, “Legend of a Fighter“, “Heart of the Dragon“, “Tiger on the Beat” “Eastern Condors” and “Dragons Forever“. He sadly passed away on 30th March 2017. 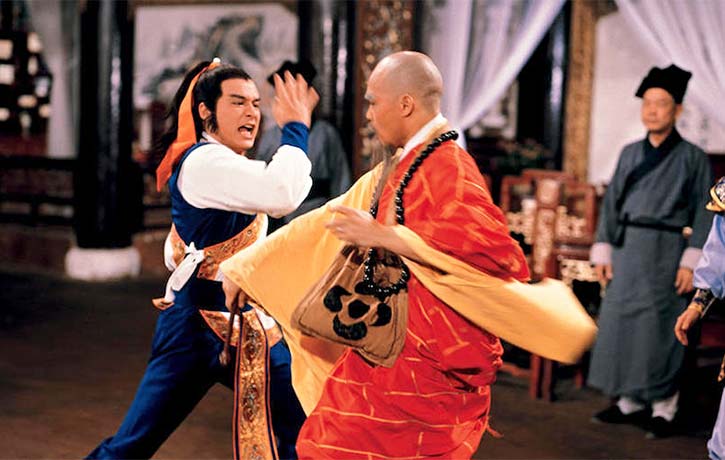 Kara Hui Ying-hung stars as “8th Daughter/Yeung Kei”. Kara Hui got her big break in 1976’s “Challenge of the Masters”, going on to appear in many Shaw Brothers classics including “Invincible Shaolin”, “Mad Monkey Kung Fu”, “Dirty Ho”, “Legendary Weapons of China” and “Return to the 36th Chamber”. Her defining role was as the lead in 1982’s “My Young Auntie” for which she won the Best Actress Award at the 1st Hong Kong Film Awards. Still active today, in recent years she has appeared in the martial arts horror movie “Rigor Mortis” and opposite Donnie Yen in “Dragon/Wuxia“.

Legendary Shaw Brothers director, choreographer and actor, Lau Kar-leung has a cameo role as “Hunter”. A real-life Hung Gar expert with a direct lineage to the Chinese folk hero and martial arts master Wong Fei-hung, Lau Kar-leung’s career spanned some sixty years. Working on the early black and white Wong Fei-hung movies starring Kwan Tak-hing, he soon rose through the ranks to appear in, choreograph or direct some the most acclaimed martial arts movies of all time. Just a small selection includes “The One Armed Swordsman”, “Boxer From Shantung”, “The 36th Chamber of Shaolin“, “Mad Monkey Kung Fu”, “My Young Auntie”, “Pedicab Driver”, “Martial Arts of Shaolin“, “Tiger on the Beat” and “Drunken Master II & III“.

The heroic General Yeung Yip is betrayed on the battlefield by General Pun Mei. Yeung and five of his sons are killed, but two of his sons are able to escape. The sixth son returns home, severely haunted by the events.

Meanwhile, the fifth son seeks refuge in a monastery in Mount Wutai. As blades are not allowed inside the monastery, the fifth son uses his spear skills to practice with a pole, eventually developing the unique eight diagram pole-fighting technique.

The finale is as frantic as it is innovative

Just when it seems he has put his anger and past behind him, he discovers that the Khitans have captured his younger sister, Yeung Kei, who had been looking for him. He must break his Buddhist vows to save his sister and exact his revenge.

General Yeung and his seven sons open the film using their spears to battle Pan Mei’s traitorous Mongol soldiers. The choreography is out of the top drawer, with each son engaging multiple opponents at once with swift and fluid weapons techniques. There are some superfluous pole twirls but they only add to the stylish and impressive skills of each fighter.

Gordon Liu and Lau Kar-leung have an axe versus pole match in a relatively confined space. Even so, the choreography is intricate and each strike looks genuinely powerful.

When Gordon Liu joins the monastery he demonstrates his mastery in a series of training sequences. Whether it is the accuracy of his strikes against a mock-up of a razor- toothed wolf, performing silky kung fu forms, or sparring fellow masters and monks, there is an authenticity to his movements. His pole duel with Phillip Ko as the Abbot is simply astonishing. The speed, rhythm and long takes make it one of the finest examples of weapons fighting in a kung fu film.

Female screen fighting legend Kara Hui has an astounding introduction fighting someone on the ground whilst remaining on horseback. It is a real horse that must have been extremely well trained to engage in the choreography. Once Hui dismounts the horse she has a superb fight using her straight sword against an oak Guandao. Hui moves with speed, flexibility and grace using recognisable sword form techniques.

The pole duel with Phillip Ko is simply astonishing

As the tension and stakes increase throughout the film, so does the amount of onscreen violence and bright red theatrical blood. The finale is as frantic as it is innovative and has an amusing pay off from the earlier “wolf training” sequences. The arrival of the monks into the battle brings with it a more acrobatic style, featuring plenty of handsprings and somersaults thrown into the mix.

Coming late on in the Shaw Brothers extensive catalogue of martial arts movies that started in the 1960’s, this is perhaps the pinnacle of their cinematic output. That is no mean feat when you look back at other Shaw Brothers titles such as “The One Armed Swordsman”, “Five Fingers of Death/King Boxer”, “Blood Brothers”, “Killer Clans”, “The 36th Chamber of Shaolin”, “Five Deadly Venoms”, “Clan of the White Lotus”, “Sentimental Swordsman”, and many, many more.

This Blu-ray presentation, released in the UK by 88 Films from the Celestial Pictures restoration, is surely the finest this film has ever looked. The picture quality is squeaky clean with the bright reds and yellows of the costumes and sets popping right out of the screen. It comes complete with an informative booklet packed with photos and a fold-out poster featuring some stunning artwork for the film.

Lau Kar-leung’s film direction is also possibly at its peak here. The action choreography is jaw-dropping at times, and much more fluid than some of the earlier Shaw Brothers films. Many of the sets look like they have been filmed on a theatrical stage. With the wide-frame cinematography and melodramatic acting you can almost imagine this as an action-packed stage show.

Along with “The 36th Chamber of Shaolin”, “The Eight Diagram Pole Fighter” must rank as one of the definitive period kung fu films of the 20th Century and is surely at the top of many fans’ all-time favourite lists!

“The Eight Diagram Pole Fighter” is available on stunning Blu-ray, courtesy of 88 Films, and can be pre-ordered via Amazon, releasing Monday 2nd March 2020.

Does “The Eight Diagram Pole Fighter” from some 35 years ago rank among your favourite Shaw Brothers kung fu movies? Is this Gordon Liu at his very best in your opinion, or does another title vie for top spot? Which restored classic martial arts movies have you been enjoying on Blu-ray recently? Let us know in the comments below; Like, share and join in the conversation on Facebook and follow us on Twitter & Instagram!

CALCUL8 THE EFFECT OF YOUR FU with news these Top 5’s, Top 10’s, exclusive interviews, get Officially KFK’d and subscribe for more surreal, classic fight action on YouTube!