Presented from the Taiwan Film Institute’s 2K HD restoration, this is a witty, wuxia classic from master craftsman director, King Hu and voted among the Best 100 Chinese Motion Pictures of all time! Available on DVD and Blu-ray for the first time in the UK today, 24th February 2020, courtesy of Eureka Entertainment. Stars Hsu Feng and Chun Shih.

A regular in King Hu’s movies, Taiwanese actress Hsu Feng stars as the cunning thief “White Fox”. Hsu appeared in classics such as “Dragon Inn”, “A Touch of Zen“, “The Fate of Lee Khan”, “The Valiant Ones”, and “Legend of the Mountain”, and produced the highly acclaimed “Farewell My Concubine”.

Tien Feng stars as “General Wang”. In a career spanning over 40 years, he acted in or directed over 120 films. He is best known to martial arts fans for his roles in movies such as “King Boxer”, “Fist of Fury“, “The Fate of Lee Khan”, “The Young Master” and “Miracles”.

A popular actor in many Taiwanese productions, Sun Yueh plays the scheming “Esquire Wen”. He appeared in King Hu’s companion piece to this film, “Legend of the Mountain”, and has featured in “Fantasy Mission Force”, “City on Fire” and “Pedicab Driver”.

Another familiar face from many Taiwanese and Hong Kong movies, Tung Lin plays the anti-hero convict “Chiu Ming”. Tung Lin played numerous roles from the late 1960’s through to the 1980’s. A soldier who began his stage career as a member of an army theatrical troupe, Tung left the military in 1966 and entered the movies, acting in such notable Taiwanese motion pictures as “Lady in the Tower”.

From 1972 to 1976 he was a constant presence in Shaw Brothers movies, appearing in as many as five films a year. His works included “The Water Margin”, “Intimate Confessions of a Chinese Courtesan”, “Payment in Blood” and “Kidnap”. After leaving Shaw Brothers, Tung had a close working relationship with King Hu, not only performing in “Raining in the Mountain” and “Legend of the Mountain”, but also serving as assistant director on the latter.

White Fox and Gold Lock scope out the temple

Esquire Wen is a wealthy patron of the monastery

Trying to steal the priceless manuscript

One of the legendary ”Seven Little Fortunes” under the name of Yuen Ting, Ng Ming-Choi stars as “Gold Lock”, White Fox’s partner in crime. In a prolific career, he has been beaten up by Bruce Lee in “Fist of Fury”, killed by Bolo Yeung in “Enter the Dragon”, and performed fights and stunts in over 70 movies. He portrayed the real-life Hung Gar master Lam Sai Wing in 1979’s “Butcher Wing”, and in recent years appeared as Uncle Hua in Sammo Hung’s “The Bodyguard”.

A regular in King Hu’s films, Taiwanese actor Shih Chun plays “Hui Tung”, who will go to any lengths to get the manuscript. Making his big screen debut in “Dragon Gate Inn”, he would go on to appear in “A Touch of Zen” and “Legend of the Mountain” for King Hu. He had a cameo as the Old Herb Picker in 2015’s acclaimed “The Assassin”.

Having appeared in his first film aged just three, veteran of nearly 180 movies, Paul Chun Pui plays “Hui Ssu”. The older brother of actor David Chiang and older half-brother of actor/ director Derek Yee Tung-Shing, he is regarded as one of the greatest Hong Kong actors of his generation. In 1986 he won Golden Horse and Hong Kong Film Awards for Best Supporting Actor for his role in “The Lunatics”. He played Uncle Noh in Jet Li’s “Fist of Legend” and Uncle Tak in Jackie Chan’s “Shinjuku Incident”.

Set in a remote Buddhist monastery in 16th Century China, a power struggle ensues when the Abbot of the Three Treasures Temple announces his imminent retirement. 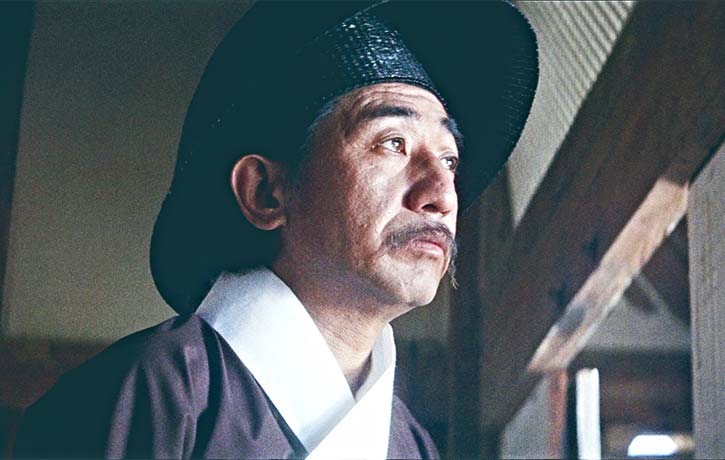 The ageing Abbot invites three outsiders to advise him on the critical choice of appointing his successor: Esquire Wen, a wealthy patron of the monastery, General Wang, commander-in-chief of the local military, and Wu Wai, a respected lay Buddhist master.

Within the monastery, several disciples aspiring to the position begin to collude individually with Esquire Wen and General Wang. But these two invited advisers have come with seditious intent, scheming to obtain a priceless scroll housed in the monastery: the hand-written Tripitaka scripture, “The Mahayana Sutra”.

Meanwhile, convicted criminal Chiu Ming has arrived at the monastery to atone as a monk. He is assigned to safeguard the scroll at the house of scriptures, and encounters thieving rivals White Fox who poses as Esquire Wen’s concubine and General Wang’s fearsome Lieutenant Chang, who originally framed Chiu Ming for the crime he did not commit.

There are beautiful sunlit opening shots of the South Korean countryside as Wen and his party make their way through the mountain forest to the Three Treasures Temple.

White Fox and Gold Lock initially spend a fair amount of time sneaking around the temple. They silently flip, jump and roll in and out of hiding places to avoid being seen by any passing monks.

When White Fox steals a small crate from the temple scripture hall, there is an intricately choreographed fight as White Fox, Gold Lock and Hui Tung fight to recover the box from each other. It is very operatic in style with some nice leaps, tumbles and butterfly kicks as each participant defends and counter attacks.

The best of the action takes place in the woods 1

The best of the action takes place in the woods as the various factions chase and fight each other to get their hands on the priceless manuscript. There is a bit of bounding around on hidden trampettes, but there are some good traditional fist and leg techniques too, and even a decent bit of pole work.

I’ll get this out of the way now; this is not a martial arts movie. The two or three moments of physical action do feature some entertaining, opera-style shenanigans. This film is more of a crime caper, full of sly, political manoeuvring, as each faction tries to profit from the appointment of a new Abbot, and get their hands on a valuable manuscript.

There is a theme of karmic Buddhism throughout as each party’s actions has a knock-on effect. The dialogue is often surprisingly witty and entertaining and helps maintain the viewer’s interest over the slow-burning two-hour running time.

Full of sumptuous visuals, this is another example of why King Hu has been such an influential film director. I have no idea on the condition of the original film’s negative, but this restoration by the Taiwanese Film Institute for the most part delivers a sharp picture with vibrant colours. Every now and then though there are a couple of frames that look a little washed out. Even so the cinematography is stunning to look at, especially the exquisite exterior shots of the real-life, world-famous, Bulguksa Temple, located on the slopes of Mount Toham in South Korea.

For fans of King Hu’s works and Asian cinema this is certainly a must-have release for your collection!

Who can you trust

The dialogue is often surprisingly witty and entertaining

Raining in the Mountain on dual format Blu Ray DVD 1

“Raining in the Mountain” releases today, 24th February 2020, courtesy of Eureka Video, you can also order it via Amazon. WIN YOUR COPY IN OUR FREE-TO-ENTER COMPETITION but do hurry, as it ends Sunday 8th March 2020!

Have you enjoyed Eureka’s collection of newly restored classics? Are you a fan of King Hu’s works that have inspired filmmakers including Zhang Yimou, Ang Lee and Quentin Tarantino? Which other old-school wuxia films or martial art movie classics would you like to see receive the same treatment? Let us know in the comments below; Like, share and join in the conversation on Facebook and follow us on Twitter & Instagram!

KEEP ON TOP OF YOUR MOUNTAIN and EXTEND YOUR REIGN INTO THE FU-NIVERSE with news, Top 5’s, Top 10’s, exclusive deep-dive interviews, don your Official KFK garb like Kung Fu royalty and subscribe for more FUelled action on YouTube!