As with the first sequel, this third film in the trilogy is a follow-up in name only and features many of the same cast members from the first two films playing new characters. This was Jet Li’s first proper Hong Kong-made film and here he stars as “Lin Zhi-ming”, a mischievous orphan Shaolin monk seeking revenge for his parents’ murder.

Returning for a third time is the real-life Praying Mantis master Yu Hai as “Master Shi Ren “, the head of the Northern Shaolin school. Another real-life martial arts champion and star of the previous movies, Yu Chenghui plays “Lord He Suo”, the wicked warlord who is the subject of our hero’s quest for vengeance. Former Chinese National Wushu Team member Sun Jian-Kui also returns for a third time as one of Lord He Suo’s henchmen, as does the bald Ji Chunhua,

In Ming Dynasty China, the Northern-style Shaolin monks have a friendly rivalry with their Southern counterparts. Lin Zhi-ming is a mischievous monk from the Northern school who has a hidden agenda. Zhi-ming learns that Lord He Suo is responsible for the death of his parents and seeks vengeance at the Lord’s extravagant birthday celebrations. Unbeknown to Zhi-ming, there are two rebels, Si-ma Yan and Chao Wei, who are also hoping to assassinate Lord He Suo. When their attempts are foiled, the three band together and make their escape.

Jet Li has fists of fury

The mantis prepares to strike

To complicate matters further, Zhi-ming wears a bell around his ankle that was placed there as a child to betroth him to a girl with the same bell around her own ankle. Si-ma Yan happens to be that girl.

The Northern and Southern schools must put aside their differences and unite if they are to defeat the wicked Lord He Suo.

The action opens with Jet Li training. The style is not unlike Li’s appearance in the famous “This is Kung Fu” documentary as he uses his fists to pound through inches of paper strapped to a tree. However, there is a fury behind his rapid and savage punches.

Duel of the Masters

North and South Shaolin must unite

As Li returns to the Shaolin Monastery, Yu Hai gives the monks a lesson in the art of the wooden pole. Li and his fellow monks perform wushu-style cudgel basics with near-perfect synchronisation, which is enhanced with some cool slow-motion filming.

Yu Hai, who is a Praying Mantis Master in real-life gets to show off a beautiful form as he practices the art at night, whilst being imitated by Li.

An entertaining early set piece is the contest between the Shaolin “Southern boxing” and “Northern pole” schools. The two teams of monks must use their martial arts skills to fight for a brush to be the first to paint a piece of calligraphy. The agility of all the players is quite astonishing. A good example is when one of the boxing students executes a Lotus Kick (jumping outside crescent split kick) over the head of Jet Li, without the aid of wires.

The 3 heroes must band together

Under the guise of Lord He Suo’s birthday celebrations, there are some excellent demonstrations of traditional Chinese performance arts, including acrobatics, lion dance, dragon dance and some great fan dancers. The lions even do a parallel tightrope act! Inevitably, it all descends into a fight when a group of rebels disguised as acrobats attempt to assassinate Lord He Suo. The ensuing fight with the warlord’s soldiers requires Huang Qiuyan and Hu Jianqiang to use long fist techniques to fight off their spear wielding attackers, before Jet Li comes to their aid.

In a highly-stylised “northern” versus “southern” fist fight between Jet Li and Hu Jianqiang, we start to see the influence of Lau Kar Leung’s more robust style of choreography. 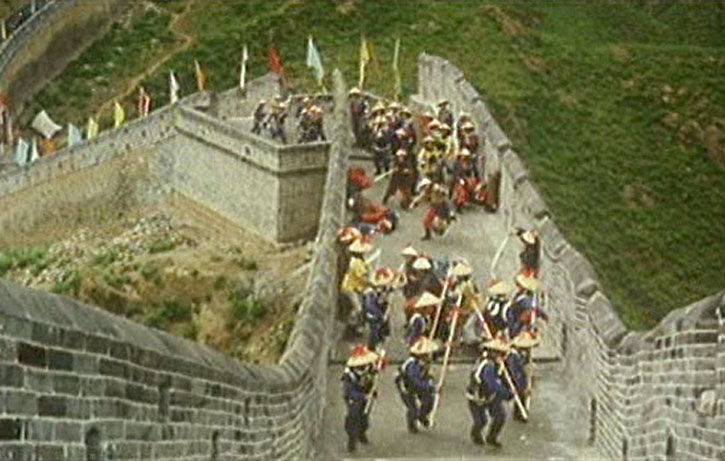 Great battle at The Great Wall

Great agility in the Calligraphy Contest

Inevitably for the Shaolin Temple films, Jet Li ends up dressed as a girl, while his two new companions are disguised as sheep! When they are accosted by some soldiers a terrific fight sequence takes place on the Great Wall of China, featuring spear versus spear, sword versus spear, double sword versus spear and more! Hu Jianqiang is especially fast and furious with the San Jie Gun (Three Sectional Staff).

The grand finale is ignited by an action set-piece on the Warlord’s barge. Hu Jianqiang uses his Southern fist whilst Jet Li uses his familiar Northern wushu style to fight off hoards of soldiers. Li eventually confronts the villain in a fabulous spear versus long sword contest, with Hu Jianqiang joining shortly after with his Southern sword style. The Northern pole and Southern sword monks soon arrive to engage the enemy soldiers in a mass brawl. Lord He Suo makes his escape with a dive into the river that would even make Tom Daley green with envy! He soon runs into Yu Hai and a fantastic duel of the masters ensues, with Yu Chenghui pitting his famous long sword against Yu Hai’s wooden pole. The weapons are soon dispensed with and we are treated to Yu Hai’s Praying Mantis fist in all its glory. Jet Li soon arrives and demonstrates the effectiveness of his own Mantis fist and Bagua technique!\

The action ignites on the villains barge

This film feels more like a natural follow up to the first film than the second one. The returning cast members display as high a skill level in this film as in any of the prequels and it’s great to see them all in action once more.

The Chinese countryside, Forbidden City and Great Wall all provide some beautiful backdrops to the well-filmed action. The fights are shot wide with long takes and hardly any camera trickery or wires. Lau Kar-leung’s choreography is an improvement on the second film but not quite as fresh as the first film. Bizarrely, Jet Li’s acting performance feels very wooden and over-the-top compared to his previous roles but in the action stakes he’s as fluid and agile as ever. 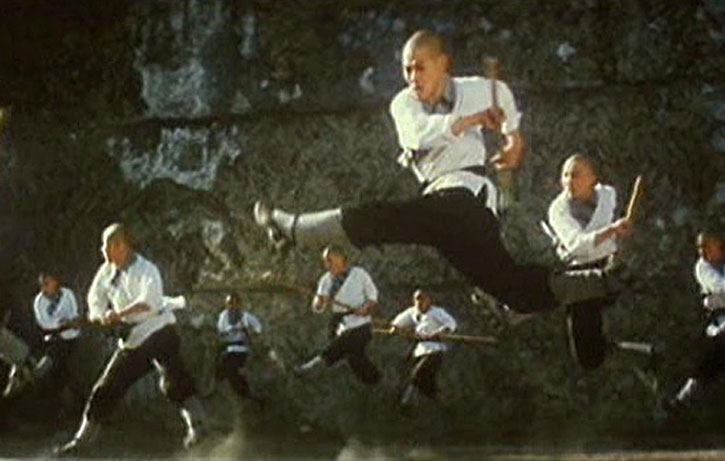 Even Tom Daly would envy this dive

Chao Wei disguised as a sheep

If you enjoyed the previous movies, you’ll love this as it makes for a thoroughly action-packed and entertaining conclusion to the trilogy.