The 2020 superhero slate is off to a strong start with “Birds of Prey”, a potty-mouthed and utterly bonkers superhero romp that both sets the bar high for this year’s comic book adventures, and stands as the first truly great, in terms of action, movie of the new year.

Among the growing trend of R-rated comic book movies, Harley’s solo adventure is awash with the freedom that rating grants it, and just as awash in the neon-lit primary colors of a comic book, or perhaps more fittingly of “John Wick“!

Following her break-up with The Joker, Harley Quinn, played by Margot Robbie, is on her own on the streets of Gotham City, fully severing ties with her former lover by destroying the Ace Chemicals plant where she first pledged her fealty to The Clown Prince of Crime.

Unfortunately, this also strips her of the protection from reprisals she once enjoyed as The Joker’s girlfriend, with everyone in Gotham that she he previously wronged by his side now eager to claim their vengeance.

She eventually finds herself in the clutches of Gotham’s rising crime boss Roman Sionis, (aka Black Mask) played by Ewan McGregor, but manages to strike a deal for her life by offering to retrieve a diamond stolen from his associate Victor Zsasz, played by Chris Messina, by a young thief named Cassandra Cain, played by Ella Jay Basco.

Margot Robbie as Harley Quinn gets READY TO RUMBLE 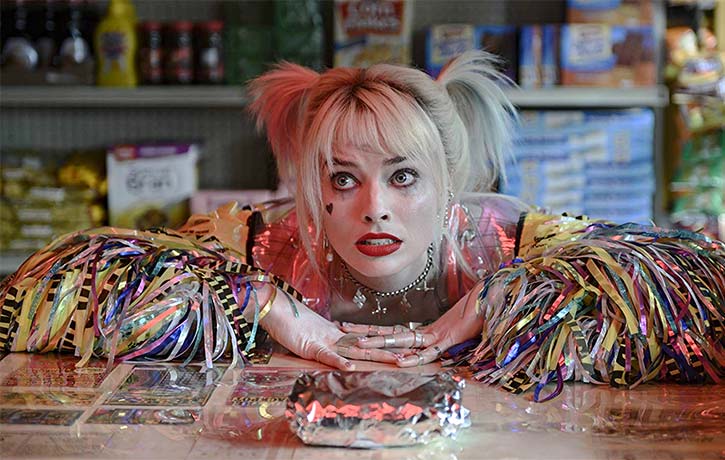 Harley starts off her new life with an egg sandwich

However, with the diamond encoded with the bank codes of the previously massacred Bertinelli crime family, Harley faces significant competition in retrieving it.

In addition to being the surviving daughter of the Bertinelli’s, Helena, (aka The Huntress) played by Mary Elizabeth Winstead, picks off her family’s killers on the streets of Gotham, along with Roman’s driver, Dinah Lance, played by Jurnee Smollett-Bell (aka Black Canary). Dinah develops a crisis of conscience upon realizing the fate that Cassandra will face if Roman gets the diamond back.

Not many comic book movies have had the opportunity to take place from the perspective of a character who’s certifiably insane, and “Birds of Prey” leans right into that with Harley Quinn in its driver’s seat. 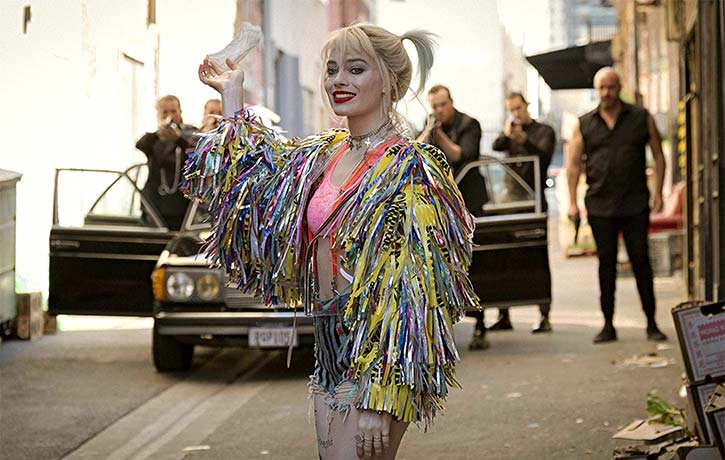 Harley gets in a bit of a tight spot

Margot Robbie proves beyond a shadow of a doubt that she was simply born to play this character, with her performance and narration hewing the movie closer to “Deadpool” than “Logan” on the R-rated comic book movie spectrum, along with its overall “John Wick’ meets ‘South Park”.

Jurnee Smollett-Bell all but steals the show herself as Harley’s polar opposite, Black Canary – easily the toughest warrior woman to grace the big-screen since “Alita: Battle Angel” even without breaking out her “canary cry”, though that certainly proves a show-stopper for even the most rabid fanboy when she does.

The Huntress, by contrast, is a little underutilized, periodically dropping in to off her family’s killers before becoming a more significant player in the second half. It bears repeating that this is a Harley Quinn movie first, and a Birds of Prey origin second, and even a bit of a police procedural with Rosie Perez’s tough-as-nails GCPD Detective Renee Montoya.

Harley gets her sweep on

Nevertheless, it never feels jumbled or undercooked, and on the latter point, Harley’s quest to feast on an egg sandwich to celebrate her break-up with The Joker is sure to be the biggest comedic running gag of 2020, and probably leave most audience members craving one themselves. (I’m assured there are Vegan-friendly options too.)

To say that “Birds of Prey” kicks off 2020’s action movie crop strong would be an understatement. With names like Jon Valera, Jonathan Eusebio, and Chad Stahelski attached, viewers can hardly be blamed for setting their expectations to “John Wick” levels, and boy, does it live up to them. Even such minor action bits as Black Canary pummeling a duo of male adversaries attempting to pick up a drunken Harley is enough to send you wincing.

However, Harley’s raid on the Gotham City Police Department to retrieve Cassandra is quite literally a confetti-filled blast of kicking, flipping, and aluminum bats, and certainly the best fight scene of the year so far.

The finale is also both a whacked out circus smackdown and exhilarating car chase that is bizarrely reminiscent of 2009’s “Zombieland”, with Harley, Black Canary, The Huntress, Cassandra, and Montoya forced to band together to take down Sionis. The latter side of the finale especially pulls out some of the movie’s most daredevil stuntwork with Harley’s roller-blading to catch up to Sionis’ speeding car and pulling out just about every gymnastic manoeuvre she’s got in her pocket to hold her own against his gun-wielding henchmen.

Harley is beginning to enjoy her freedom from The Joker

Helena Bertinelli hunts down her familys killer as The Huntress

Harley even in prison is a woman on a mission

As the first comic book movie of 2020, “Birds of Prey” is an action-packed and completely out-of-control good time. Margot Robbie is an utterly wacky delight as Harley, while Bell, Winstead, and Perez kill it as a trio of badass women that are going to be a tough act to follow among this year’s slated female-dominated superhero movies. And if ever anyone’s ever had the time of his life playing a supervillain, its Ewan McGregor as Black Mask, leaving the sage wisdom of Obi-Wan Kenobi behind for a narcissistic evildoer who could give Raul Julia’s M. Bison a close run for his money in the grandiose bad-guy department.

Both superhero geeks and action fans can rejoice – with “Birds of Prey”, 2020 is off to one hell of a good start on both!

Harley is a master of disguise

Victor Zsasz has some upsetting news for Roman Sionis

Harley is still reeling from her breakup with The Joker

Roman will stop at nothing to get his diamond back

Harley Quinn must navigate the streets of Gotham without Mr. J

Harley takes Cassandra under her wing

HUNT and PREY on more of the fresh, superhero-awakening content available in the FUniverse which includes news, Top 5’s, Top 10’s, deep-dive interview exclusives, seize a piece of KFK Official training attire and fly on over subscribing to YouTube for more epic fight action!