Thirteen years and 25 movies in, and the Marvel Cinematic Universe finally dives into its first out-and-out martial-arts fantasy adventure in “Shang-Chi and the Legend of the Ten Rings”. The movie itself is a curious case of being one of the MCU’s best movies and simultaneously being a better movie itself without being a piece of the franchise’s puzzle.

Despite that, “Shang-Chi” nevertheless zips along at a breakneck pace and keeps the audience invested with strong performances by Simu Liu and Tony Leung, the always hilarious Awkwafina  as the main source of levity, and yes, some of the most incredible action scenes the MCU has seen yet!

“Shang-Chi” is a Marvel movie, so be on the look out for cameos from other characters in the franchise, including the long-awaited return of the Abomination from 2008’s “The Incredible Hulk”, a few other heroes dropping in for the end-credits, and a certain someone from “Iron Man 3” adding greater context to his previous appearance.

It’s supposed to be just another day at work for San Francisco valets Shaun and Katy. However, after Shaun single-handedly fights off an attacking gang on a bus, including a leader with a bladed arm, Katy wants some answers as Shaun suddenly prepares to head to Macau before the gang can reach his estranged sister, Xu Xialing.

Shaun reveals that his real name is Xu Shang-Chi, and he was trained as a youth to become an assassin for the Ten Rings, a shadowy criminal organization run by his father, Wenwu.

Shang-Chi decided to leave that life behind, and before long, he and Katy as well as Xialiang come to learn the true plot of their father. It’s an assault on the hidden city of Ta Lo, with Wenwu to use the otherworldly, super-powered ten rings that have kept him alive for centuries to free his imprisoned wife. However, there’s much more afoot than Wenwu himself realizes.

Wenwu brings on the power of the Ten Rings

Shang Chi puts his opponent down with a single punch

While “Shang-Chi” is mostly a standalone story, like the rest of the MCU, it still has to drop a few nickels at the toll booth that is the franchise’s always setting up the next chapter. The MCU got to where it is now with exciting end-credit teases and every movie displaying its interconnectedness to the rest, but especially after the crescendo of “Avengers: Endgame”, it’s becoming exhausting to keep up with.

What’s more, the MCU’s use of comedy has started to become overly predictable, and in some movies (fortunately not this one) even bordering on obnoxiously intrusive. This is the paradox of “Shang-Chi” – it’s one of the best MCU origin movies, yet its MCU connections are almost entirely where its weakest points lie. Still, the fact that it’s mostly telling its own, singular story means that doesn’t hold it back too much.

The performances of Simu Liu and Tony Leung are a double-layered emotional wallop of warriors determined to defeat each other and an estranged father and son whose falling out and reunion can’t help but make them foes.

As Wenwu, Tony Leung is less a villain than a broken man desperately trying to bring back the woman who redeemed him once before, trapped in a vicious cycle of having to rely on his villainy in order to escape from it. Hong Kong action fans know Leung well, and still couldn’t have asked for a better Hollywood debut on his part.

Wenwu and Yi Ling meet for the first time

Of course, the big hook of “Shang-Chi” is that it’s Marvel’s first, full-blown kung fu movie.

Suffice it to say, no future MCU movie has any excuse not to have action scenes on the level of “Shang-Chi”, and sweetening the deal is the film’s two-tiered approach to the action.

For the most part, the action scenes of the first half could’ve come right out of an 80’s or 90’s Hong Kong flick, with stunts, powerful hits, and an abundance of different forms of kung fu at work.

Some of the best, pure martial arts fights of the year are seen in “Shang-Chi”, from the bus battle where Katy first sees her friend unleash his might, to a battle with a Ten Rings assassin on the bamboo scaffolding outside of a Macau skyscraper, and Shang-Chi’s blazing one-on-one with the masked assassin Death Dealer.

Shang Chis sister Xu Xialing not happy to see him 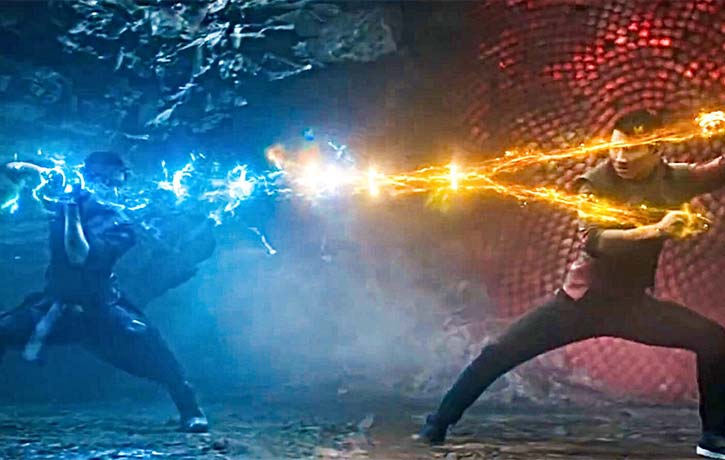 Shang Chi and Wenwu battle for the ten rings

On the other side of the coin, the film’s intro with Wenwu and Ying Li and its second half is more of a graceful wuxia adventure with a superhero twist.

The fantasy elements, including flying dragons and the ten rings themselves, are where “Shang-Chi” gives its title character’s backstory more of a fantasy-based reworking from his street level adventures in the comics. And while the dragons themselves feel a little over-the-top for the finale, the movie’s outstanding action scenes, with and without wire fu at play, and emotional family conflict keep you absorbed and enveloped in Shang-Chi’s big screen debut.

That, and the ten rings as an extension of the wielder’s own martial arts ability is simply an “Alita: Battle Angel”-level marriage of eye-popping CGI and real martial arts. 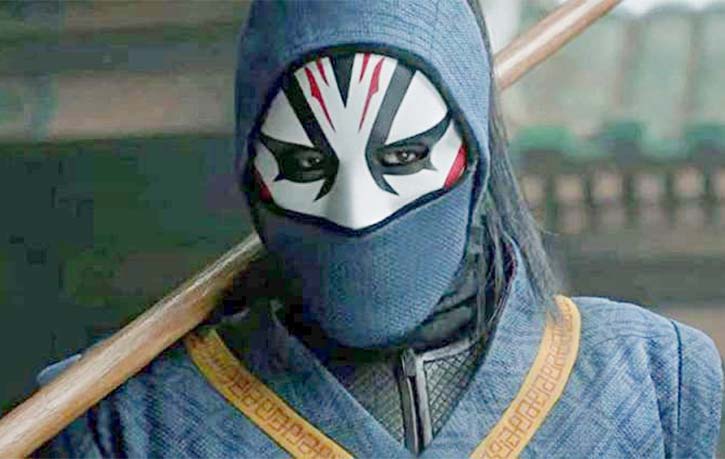 Death Dealer is a deadly assassin

Yi Nan gives Shang Chi advice for the battle ahead

Though slightly burdened with the requisite MCU teases, including some end-credit cameos, “Shang-Chi and the Legend of the Ten Rings” is fully deserving of the praise it’s earned as one of the franchise’s best origin movies.

Simu Liu glides through a charismatic performance and action scenes that never fail to amaze, while Tony Leung’s performance is that of a villain; equal parts tragic and determined. And let it be crystal clear here and now to future MCU movies – when it comes to fight scenes, “Shang-Chi” is the bar to meet, or no sale!

Shang Chi is rigorously trained in the Ten Rings 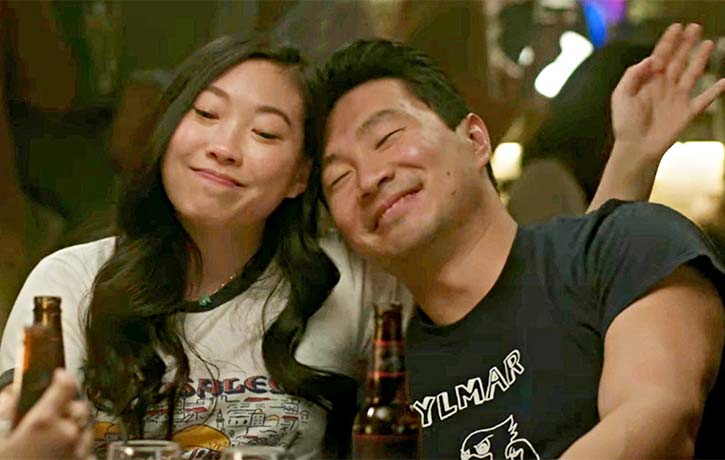 We at Kung Fu Kingdom would also like to extend our heartfelt condolences to the family and friends of the film’s second unit director and supervising stunt coordinator Brad Allan who tragically passed away last month, on August 7th, 2021

Brad was part of the Jackie Chan Stunt Team, and made a monumental impact on martial arts films in both the East and the West. Millions will remember him best for his spectacular fight scenes with Jackie in 1999’s “Gorgeous”.

Brad would later go on to design stunts and fight scenes for such Hollywood hits as “Kick-Ass”, “Scott Pilgrim vs. the World”, “Kingsman” 1 and 2, and others, and his work will also be seen in the upcoming “The King’s Man”.

Brad Allan was a phenomenal martial artist and an exceptional stunt professional. The world of action movies and the martial arts community will forever remember him for his unforgettable work in action filmmaking.

Have you seen “Shang-Chi and the Legend of the Ten Rings”? What are your thoughts on the movie’s incredible fight and action scenes? Are you looking forward to seeing Shang-Chi return in the future, how do you imagine the fight action will evolve, given the bar is already set this high?

SO, YOU’VE GOT “CHI”…QUESTION IS: WHAT ARE YOU DOING WITH IT? ADD TO YOURS with the FUniverse of these Top 10’s, Top 5’s, deep-dive interviews, power-up in KFK gear, and subscribe for more MARVEL-lous FU on YouTube!