Brandon Bruce Lee was born on 1st February, 1965 to martial arts legend Bruce Lee and his wife and student Linda Lee; a year before the official founding of Bruce Lee’s own style of kung fu; Jeet Kune Do! Brandon recalls; “I got into martial arts from the time I could walk. There wasn’t a lot of escaping martial arts in my household.” Brandon’s first years were spent surrounded by movie stars, athletes and martial artists, he subsequently became naturally accustomed to training. Kareem Abdul-Jabbar reminisces, “Brandon would try and emulate his father in being fit and being part of the martial arts tradition.”

A substantial part of Brandon’s younger years were spent in Hong Kong, where he attended La Salle College – the same school Bruce attended in 1952 – and quickly became fluent in Cantonese. At the age of five, Brandon accompanied his father to an interview on a talk show, where Bruce showcased his “JKD” and seized the opportunity to introduce Brandon to his fans by inviting him to break a board with a side thrust kick – which he did emphatically. This first experience of being in the spotlight was a defining moment for Brandon; Linda recalls it giving him the “motivation to decide he liked it in front of the camera.” 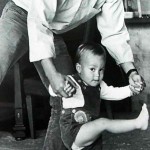 Brandon’s time spent with his father and hero proved to be defining yet, fleeting; on July 20, 1973, Bruce Lee passed away, leaving Brandon as the ‘man’ of the house at the age of 8. The Lee family moved back to LA, shortly after. Brandon took up martial arts again under the tutelage of Bruce Lee’s protégés, Dan Inosanto and Richard Bustillo at the Kali Academy. In hindsight Inosanto muses, “I considered him a serious martial artist and I think as time went on he became what I call a ‘hardcore martial artist’, but his main concern still was acting.”

At the age of 20, Brandon landed his first Hollywood role in Kung Fu: The Movie (1986) alongside David Carradine. Brandon’s final role as Eric Draven in The Crow (1994), however was to be his most memorable and definitive. Brandon was shot in a ‘freak-accident’ during the latter stages of filming and died on March 31, 1993. He is buried beside his father at Lake View Cemetery in Seattle, Washington.

Bruce Lee began training Brandon in kung fu – more specifically, Jeet Kune Do – as soon as he could walk. Jeet Kune Do, or the Way of the Intercepting Fist as a style and philosophy is an amalgam of offensive, defensive and evasive manoeuvres derived from a plethora of different martial art forms, sports and literature. Following Bruce’s passing, Brandon continued training under Bruce’s senior students Dan Inosanto and Richard Bustillo. Elements of Boxing, Muay Thai, Shoot Wrestling, Filipino Martial Arts and Brazilian Jiu Jitsu are evident in Brandon’s style of choreography and fighting.

“Because we do not know when we will die, we get to think of life as an inexhaustible well. And yet everything happens only a certain number of times, and a very small number really. How many more times will you remember a certain afternoon of your childhood, an afternoon that is so deeply a part of your being that you cannot conceive of your life without it? Perhaps four, or five times more? Perhaps not even that. How many more times will you watch the full moon rise? Perhaps twenty. And yet it all seems limitless.”

“I decided at a really early age that I wanted to get into movie making, I don’t really remember wanting to do anything else.”

“It’s about people and human situations, and that’s what has always affected me about it, and if it doesn’t have that, if you don’t care about the characters and you don’t believe in them as people, it’s just kind of a pointless exercise in blowing things up.”

“My dad left a really wonderful legacy, and I meet people around the world who really admire him and admire his work and have really been positively affected by it, too and I wouldn’t want to do anything to mar that.”

“Everybody wanted him to be like my dad, and so, he’d say; “but I’m not him. I’m my own person.” Shannon Lee

“He did everything to the nth degree, he didn’t waste a second of his life.” Linda Lee Cadwell

“Brandon would try and emulate his father in being fit and being part of the martial arts tradition and he saw that as part of his heritage, pretty soon upon being conscious.” Kareem Abdul-Jabbar

“Even in high school you knew he was on a different level, everybody else was doing a school play but Brandon was doing something he loved.” Cris Hayes

“I considered him a serious martial artist and I think as time went on he became what I call a ‘hardcore martial artist’, but his main concern still was acting.” Dan Inosanto

Victims arent we all

Trapping 101 in Legacy of Rage

The calm before the storm Rapid Fire

The apple never falls far from the tree

Partners in crime Lee and Lundgren in Showdown in Little Tokyo

It cant always rain The Crow

Trailer for Showdown in Little Tokyo

Trailer for The Crow

FunFriday - Kicking 'em when they're down with Master Ken!

Mo is a writer from Liverpool, England who loves art in all of its many forms and attributes the root of his passion for martial arts to Bruce Lee. He's a graduate in English Literature and is currently learning Japanese. Mo began practicing kung fu and plans to take up Muay Thai and/or Silat in the near future.