Any sub-genre of film is bound to get a distinctly different tone and feel when you add Jackie Chan into the mix, and, as Jackie’s legions of fans around the world can attest, 1999’s “Gorgeous” is certainly not your average romcom. Jackie is certainly dancing to a far less death-defying drum in “Gorgeous”, but that certainly won’t leave you feeling short-changed. If anything, you’ll leave the film jaws more agape then usual, thanks in large part to its not-so-heavy ‘heavy’ Brad Allan, whose blend of boxing, wushu, and gymnastics absolutely must be seen to be believed!

The one and only Jackie Chan leads the film as C.N. Chan, a wealthy businessman who finds himself falling for a Taiwanese girl named Bu, played by Shu Qi, whose entry into his life comes right out of a romance novel. Tony Leung sheds his tough guy persona in the role of Albert, while Emil Chau portrays C.N.’s childhood friend-turned business rival Howie Lo, with Jackie’s renown adversary from “Drunken Master II” Ken Lo, appearing alongside Tats Lau and Vincent Kok (who also directs the film) as Lo’s “mostly useless” assistants.

Jackie Chan Stunt Team member Brad Allan rounds out the cast in the role of Alan, a martial arts champion recruited by Lo to defeat his old friend, and rest assured, this is one Hong Kong movie where the gweilo antagonist thoroughly steals the show! 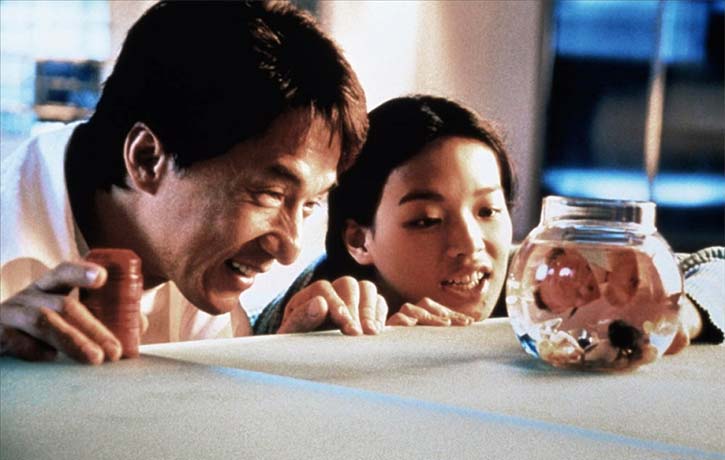 Appreciating the simple things in life

Having some FU fun on the private yacht

Bu dreams of a life outside of her small Taiwanese fishing village in Taiwan, and thinks her dreams may finally be fulfilled when she discovers a note inside of a bottle that floats ashore.

Thinking it’s an omen that she’s at long last found the man of her dreams, Bu embarks on a trip to Hong Kong to meet the writer of the note, only to discover that the man who penned it, Albert, is gay. Nevertheless, Bu realizes the note might still have brought her to Hong Kong for a reason, when she encounters and swiftly falls for C.N. Chan, a wealthy owner of a recycling company. However, C.N. has another problem on his hands when Howie Lo, a childhood friend-turned business rival, becomes determined to get ahead of his old friend, even going as far as to recruit Alan, a western-born kickboxer, to face C.N. on his behalf.

C.N. and Bu are taken by surprise 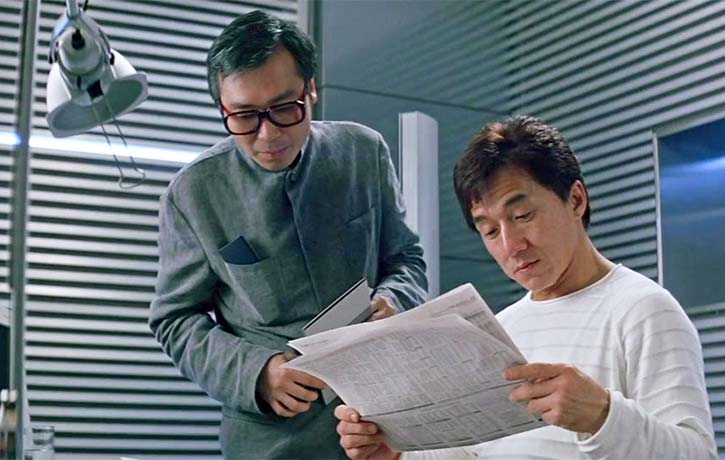 With Jackie having finally broken into the Western market with 1998’s “Rush Hour”, there’s a decidedly laid back feel to “Gorgeous” – there’s no real “villain” per se, and the volume of action sequences is distinctly less than what’s typical for him. However, if you think that makes it a let down, you’d be wrong! If anything, “Gorgeous” is arguably the most criminally overlooked corner of Jackie’s filmography, and definitely signals the point where he began to stretch his legs as an actor.
He’d dabbled in tougher roles here and there before of course, but it’s safe to say that terms like “clueless”, “doofus”, and “underdog” are quite applicable to most of the roles he’d tackled by this point. In “Gorgeous”, Jackie channels a character akin to Bruce Wayne or Steve Jobs, and plays C.N. as a powerful industrialist with such a laser-like focus on his career, that the entry of Bu into his life makes him realize just how long it’s been since he stopped to smell the roses.

Without our hero having to worry about rescuing a Chinese politician’s daughter, the central focus of the film is Bu’s vivacious personality awakening the better angels that C.N. hasn’t let out in ages – his rivalry with Howie being almost more of a subplot. However, this is romantic-comedy Jackie Chan style, which means that there’s still a mandatory number of butts to be kicked, including his own. The handful of set pieces in the film’s first half are certainly something to see, especially when C.N. fends off a gang of bat-wielding bikers as only he can. C.N.’s two match-ups with Alan are worth the admission price alone – and give Jackie one of his best on-screen enemies ever in the form of Brad Allan!

Jackie’s never shied away from letting his opponents steal the show, but the way in which Brad Allan the pulls off the theft makes him arguably one of the all-time greatest scene stealers there ever was. Their first duel, orchestrated by Howie to humiliate C.N., is a rarity for Jackie – a straight up kickboxing match with both combatants wearing gloves. With his combat skills on the rusty side due to his hectic business schedule, our hero is utterly outshined at every turn by Alan, hopping around like Muhammed Ali one moment before cycloning through the air like Jet Li the next. If there’s a top ten list to be made of Jackie Chan movie fights in which he loses, C.N.’s first encounter with Alan would have to be in the top three, at minimum.

Fortunately, our hero has Bu by his side to give him the right kind of pep talk and spur him on to train for the inevitable rematch, which somehow ends up being twice as incredible as their first. Okay, seeing C.N. outmatched so easily by Alan in their first go around certainly has that shock factor on its side. However, after C.N. whips himself back into shape for a rematch, we’re now seeing two fighters at that level squaring off, and it only highlights just how much “Gorgeous” has slipped through the cracks of Jackie’s career highlights reel.

Albert breaks the news to Bu

C.N. and Alan are a little punch drunk

C.N. gives his attacker the push

The fact that the finale of “Gorgeous” isn’t regularly discussed in the same terms as Jackie’s work in “Wheels on Meals” and the “Drunken Master” films frankly makes as much sense as saying that “Die Hard” is not a Christmas movie, especially with the uniquely Jackie Chan-style comedic touch he and Alan give it (one that earned it a place of honour on KFK’s 10 Funniest Martial Arts Fights list, BTW)!

The fact that “Gorgeous” has been so overlooked is among the most puzzling elements of Jackie Chan’s career. Nevertheless, it’s all the evidence the world will ever need that, even when he shifts gears and dives into uncharted territory, his touch of genius always becomes apparent. His chemistry with Shu Qi is certainly enough to make you want to see him try his hand at romcoms again, and the level of show-stealing, head-turning amazement that Brad Allan brings to film simply hits it out of the park. There are rom-coms that are pretty, even some that are quite lovely, but roll Jackie Chan and Brad Allan into one, and it’s simply “Gorgeous”!

Mysterious message in a bottle

Bu tries to bring a smile to C.N

C.N. is ready for his rematch with Alan

Remember watching “Gorgeous”; what did you like best about it and what did you think of Brad Allan’s fights with Jackie? Now we’re in 2019…what action-fight movies or series are you really looking forward to? Let us know in the comments below; Like, share and join in the conversation on Facebook and follow us on Twitter & Instagram. (Stay Gorgeous and be the best version of you this year by keeping tuned to a FUniverse of Top 10’s, we welcome “Triple Threat” star Tiger Chen to the Hall of Fame…exclusive coming soon, join the club and subscribe for videos too. Happy FU-Year, Warriors!)