To call a movie a live-action cartoon can either be the highest form of praise or the most disparaging form of criticism, and in the case of “Kingsman: The Secret Service”, the former is totally applicable. Based on Mark Millar’s acclaimed graphic novel series, “Kingsman” combines the over-the-top violence of an “Itchy and Scratchy” cartoon with the cheeky silliness of “Austin Powers” and delivers an action-packed black comedy spry thriller that IS what the James Bond series would look like if the outlandishness of the Sean Connery/Roger Moore era were continued into the 21st century!

Roxy lines up her target

Despite having many academic and intellectual achievements to his name, Gary “Eggsy” Unwin runs into trouble of some kind everywhere he goes, whether in the form of his mother’s overbearing and abusive boyfriend Dean, or the London police for his delinquent activities that go as far as grand theft auto.

Eggsy is bailed out of his latest pickle by Harry Hart, an Agent for the top secret British intelligence organization known as “Kingsman”, who recognizes that the young ne’er do well may have what it takes to be the organization’s newest recruit. Harry, who operates under the Kingsman codename “Galahad”, feels further compelled to take Eggsy under his wing due to his connection to his father, who served in Kingsman and even sacrificed his life to save him during a mission in the Middle East.

As Eggsy begins his rigorous Kingsman training alongside his fellow recruits, including another young Londoner named Roxy Morton, billionaire philanthropist Richmond Valentine unveils his latest business venture involving a new state-of-the-art SIM card that grants users unlimited free internet access from any digital device on Earth. However, unbeknownst to the world, the SIM cards are a secret ploy to trigger everyone in ear shot to violently attack each other as part of Valentine’s plot to “save” humanity from destroying the world through climate change and overpopulation.

Up close and personal 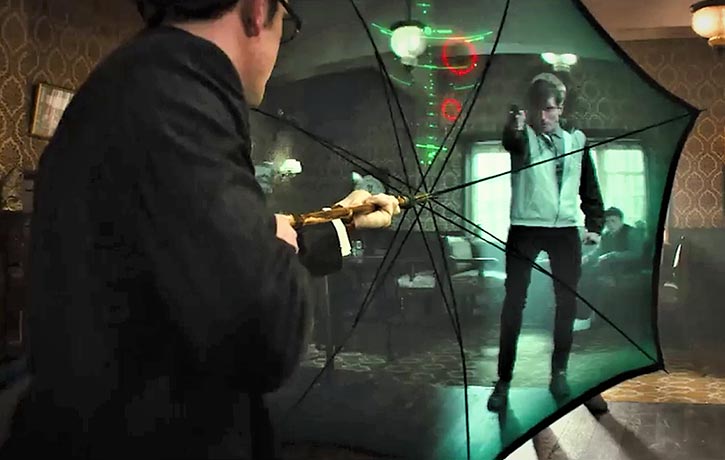 The bulletproof umbrella is one of Kingsmans many great assets

Director Matthew Vaughn is utterly unconcerned with anything approaching realism in “Kingsman”, and while that might sound like a criticism at face value, it’s by far the highest compliment that can be bestowed upon it.

With its casual zaniness, the film could almost fit right in with the “Austin Powers” series; Samuel L. Jackson’s performance of the child-like Valentine (the polar-opposite of his portrayals of Nick Fury) would certainly make the Dean’s List at Evil Medical School! The film solidifies its aim to be the modern-day answer to the Connery/Moore era of the James Bond series in Harry’s unusually gentlemanly bar-room brawl with a gang of potty-mouthed cockney’s intent on beating Eggsy’s face in.

With his mastery of Bartitsu, the eclectic British martial art made famous in the Sherlock Holmes novels, Harry battles off his opponents with a combination of fighting skill and a bulletproof umbrella – and that’s a string of words so sublime in their blend of the utterly ridiculous with the mesmerizingly awesome that I feel as privileged to have typed them as I do to have seen them play out on-screen!

“Kingsman” absolutely revels in that level of tongue-in-cheek craziness in every second of its run time. We may applaud the tenacity of amputee Olympic sprinters who set world records with their artificial metallic legs, but “Kingsman” would never dream of leaving it at that, and conjures up one of the greatest evil enforcers of few words since Boba Fett in the form of Valentine’s deadly assassin Gazelle, who flips and soars through the air while kicking her enemies in the face with her own synthetic limbs, each equipped with a pair of retractable blades. The film could have been nothing but Gazelle flip-flopping her way through a crowded bus station while slicing the throat of everyone around her for two hours, and the audience would have gotten its money’s worth three times over, but “Kingsman” resists the urge to play it that safe, even if doing so would’ve been perfectly, entertainingly acceptable!

Valentine’s plot to “save” humanity from destroying the Earth through climate change and overpopulation is right out of “Rocky and Bullwinkle” in its delivery method. His first test run of his doomsday device gives way to a show-stopping fight sequence that (were it not for a literal hate group serving as Valentine’s guinea pigs) would almost leave you feeling guilty for marvelling so much at Harry and dozens of unwilling people being forcibly compelled to violently attack one another.

By the time Valentine initiates his plot to unleash his weapon of mass extinction upon humanity, the film has fully morphed into the live-action 007 cartoon its striven to be with Merlin and Roxy aiding Eggsy in battling his way past Valentine’s personal army to take on Gazelle in a final battle that proves that, in the right context, CGI and wire-fu can deliver a martial arts showdown worthy of the stunt-driven WOW-factor of Jackie Chan in his prime!

Richmond Valentine isnt the good hearted billionaire he seemed to be 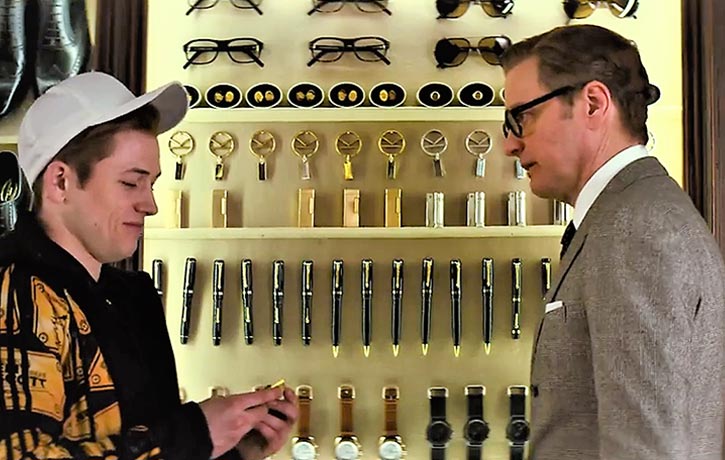 Spy movies are rarely as much of an out-and-out blast as “Kingsman: The Secret Service”. The film completely forsakes the verisimilitude of Jason Bourne and the ruggedness of any post-Cold War Bond film, and concerns itself with nothing more or less than giving you a stonking, rollicking good time. For a less well-constructed homage to spy movies, that might be an impossible mission. For “Kingsman”, it’s a cocktail of wild and glorious insanity, delivered shaken, not stirred!

Eggsy leaps over his obstacles

Richmond Valentine sees mankind as a virus and hes the cure

Harry introduces Eggsy to the world of Kingsman 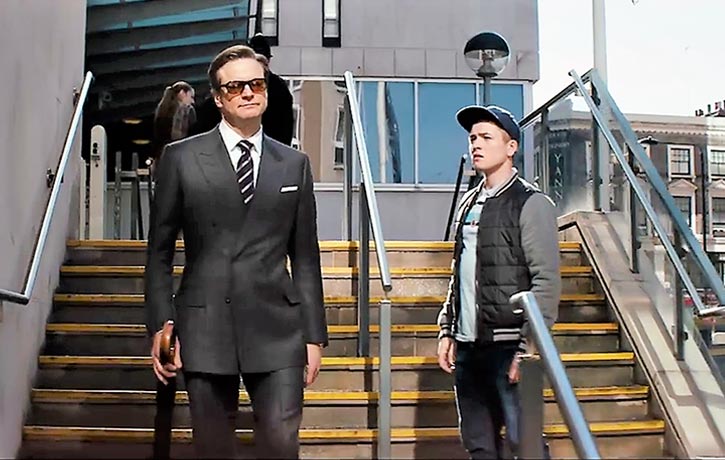 Harry takes Eggsy under his wing

Eggsy is never afraid to stand up to bullies

Gazelle dives through glass to defend her boss

Seen the movie, what did you think of its action and fights? Let us know in the comments below, join in the conversation on Facebook and follow us on Twitter. Don’t forget, to check out our previous movie reviews too!