Among the most rapidly growing trends in the world of filmmaking is the marriage of practical action with CGI. Thanks in large part to the popularity of superhero films and adaptations of literary fantasy adventures, blending the two is growing more and more commonplace. Leave it to James Cameron to merge them to perfection with “Alita: Battle Angel”. Based on Yukito Kishiro’s acclaimed manga and anime series “Gunnm”, “Alita” brings the world of its source material to life like no other manga adaptation before it. Even if you’re not familiar with its namesake, “Alita” will leave you grinning ear to ear as it takes you on an adventure through hovering post-apocalyptic sky-cities, out-of-this-world action sequences, and Rosa Salazar’s captivating, mo-cap-based performance as the title character!

Alita is a master of the ancient martial art Panzer Kunst 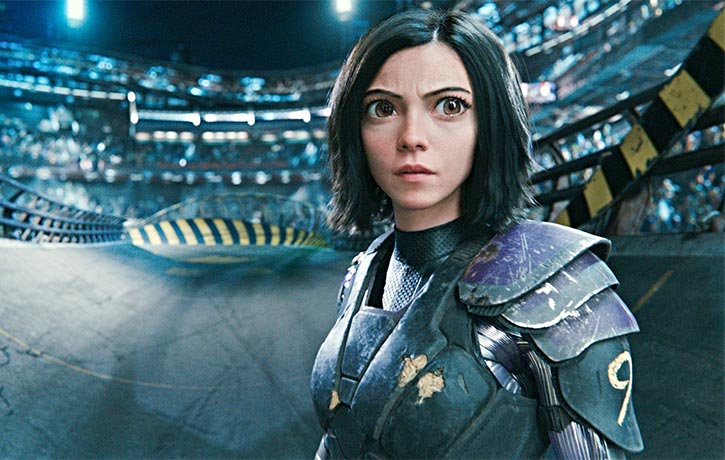 Alita must adapt to challenges in her Motorball debut

Michelle Rodriguez also appears in the role of Gelda, a cyborg mentor from Alita’s past glimpsed through flashbacks. Additionally, Jorge Lendeborg Jr. and Lana Condor  portray Hugo’s close friends, Tanji and Koyomi, while the villainous puppet master of the film, Nova, remains in the shadows throughout the film, with the identity of his portrayer kept under wraps until the very end.

In the year 2563, much of the world has been left in ruins after a conflict known as “The Fall” three hundred years earlier. In the decrepit remains of Iron City, cyber-scientist Dr. Dyson Ido discovers the remains of a female cyborg with an intact human brain while searching for scrap metal in the city’s massive trash heap.

Dr. Ido successfully rebuilds the cyborg, albeit with no memory of her past, and names her “Alita” after his deceased daughter. After befriending a street urchin named Hugo, Alita quickly develops a fascination with the high-stakes sport of “Motorball”, and latches onto Hugo’s dream of one day moving to “Zalem”, the prosperous metropolis in the sky that hovers over Iron City. 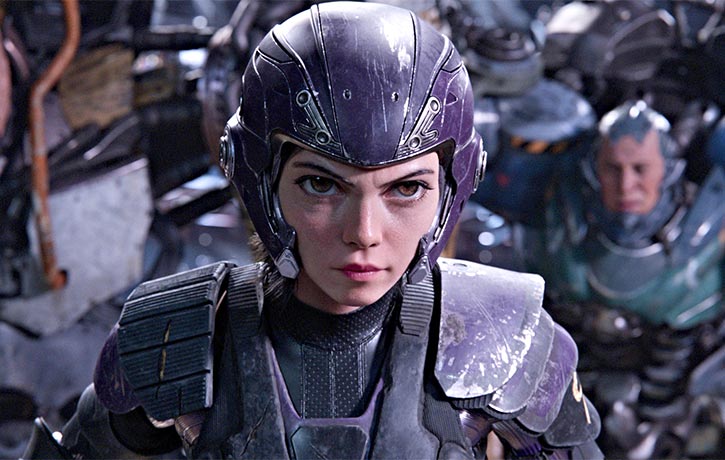 Alita soars in for a strike

Alita steels herself for battle

After defending Dr. Ido from an attack by the vicious cyborg assassin Grewishka, Alita elects to join a class of bounty hunters known as “Hunter Warriors”, in order to get to the bottom of Grewishka’s attack on Dr. Ido and bring down the man pulling all the strings in Zalem, the mysterious Nova.

As is the case with any project bearing James Cameron’s fingerprints, “Alita: Battle Angel” is a sight to behold. With visual effects technology more advanced than ever, “Alita” awes at every turn with such sights as floating cities that would be the envy of Lando Calrissian, junkyards of long-discarded scrap metal spanning as far as the eye can see, and cybernetic humans brought to life as people of flesh, blood, and steel.

Cameron’s eye for visual flair and wonderment marries perfectly with the directorial talents of Robert Rodriguez, and the latter obviously relished the larger canvas he was given to work with by the scope and scale of the film. There’s not a moment of “Alita” that doesn’t feel like the dream-like, ethereal world of an anime brought to life, but what ultimately solidifies that is Rosa Salazar’s performance as the title character. 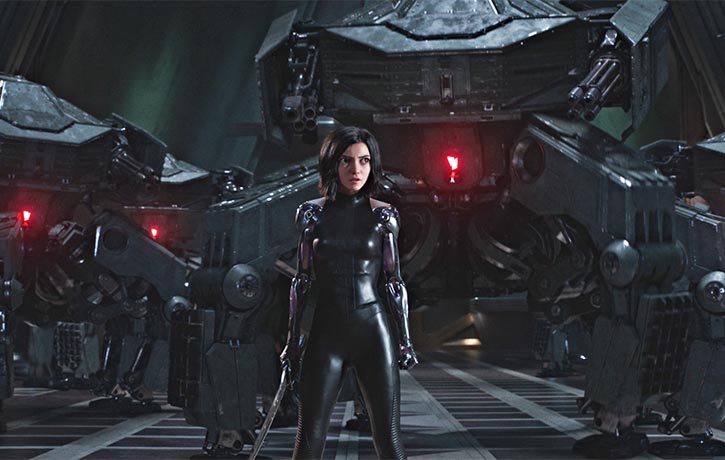 Salazar’s Alita takes in this brave new world she’s born into with a state of child-like wonder, her silver dollar-sized eyes eagerly searching for the next amazing discovery that lies around the corner. With Salazar portraying the role entirely via performance capture, Alita is without a doubt the year’s first true visual effects achievement and an absolutely dynamite performance on Salazar’s part. In the often perilous quest to translate anime to live-action while retaining the distinctive visual qualities that make it popular, “Alita” is arguably rivalled only by “The Matrix” (and, to a lesser extent, “Ready Player One”).

The film also makes possibly the most convincing case yet for the use of performance capture as a tool for designing action. Without a doubt, the action sequences in “Alita” are among the best displays of superhuman martial arts action you’ll ever lay eyes on. If anime and manga lovers don’t already feel right at home from the opening credits (which, in a nice throw-away gimmick, adjust the logo to read “26th Century Fox”), they certainly will the instant our heroine soars through the air to put a stop to Dr. Ido’s alleyway attackers.

Between the origins of the source material and Alita’s mastery of the martial art “Panzer Kunst” (German for “Armoured Art”), the film really gets to cut loose with action sequences that equal anything a mega-budget superhero movie can offer. However, the use of performance capture also keeps the action grounded in the sense of weight and human dimension that ultimately bring a feeling of reality to the superhuman abilities of our heroine and her fellow Hunter-Warriors. The bar fight at the film’s mid-point also gives Alita an opportunity to psychologically step up her game. Whereas before she defeated Dr. Ido’s attackers with a sense of surprise at abilities she didn’t realize she possessed, she now cleans house against enemies two or even five times her size with the confidence of a veteran bouncer.

Alita and friends have big dreams of leaving Iron City

And she’s certainly not one to back down even when the going gets its roughest, as we see in her second encounter with Grewishka (which MUST be kept vague, lest the sheer sweetness of its conclusion be spoiled). The ultimate centrepiece of the film, however, is its climactic Motorball sequence, and there’s no better endorsement I can make for it than to say that, as of right now, there is simply nothing playing in theatres that can give you more bang for your buck than this does. The last ten minutes, meanwhile, keeps things open-ended enough to see where another trip to Iron City might take us, and it’s certainly hard not to want one after seeing what a game of Motorball looks like!

With a veritable tsunami of mesmerizing effects and incredible, electrifying action, “Alita: Battle Angel” is by far the biggest dose of pure razzle dazzle you can pay to see this year so far.

With her performance as Alita, Rosa Salazar also takes her place alongside the great Andy Serkis in making the case for awards recognition for mo-cap based performances. The world’s biggest “Alita” fans and the most clueless of newbies alike will leave the theatre blown away. When we get to the summer movie season, we’ll have plenty of adventures with warrior women waiting to make their grand debut – let’s hope most of them are at least half as good as “Alita: Battle Angel”!

Zapan ruthlessly pursues his next bounty as a Hunter Warrior

Alita begins to fall for Hugo

Dr. Ido explains how he brought Alita to life

Grewishka has nothing but contempt for his tiny opponent Alita

Seen “Alita: Battle Angel”? How was the martial arts action in your view, what did you like best about it? What other anime or manga series would you love to see get brought back to life? Let us know in the comments below, join in the conversation, share this on Facebook, and follow us on Twitter & Instagram. In the meantime Battle Angels, stay tuned for a very special exclusive interview with the fight coordinator for both “Alita” and “Avatar” and get some R ‘N’ R by stepping into our FUniversity of Top 10s, and subscribe for videos too!)