A Cantopop star and actor more associated with comedy roles, Sam Hui plays “Yao Lung/Crying Freeman”. Best known for co-starring alongside Karl Maka in the hit “Aces Go Places” series of comedies, he also appeared in the wuxia movie “The Swordsman”. Following a near fatal accident he decided to go into semi-retirement from the entertainment industry in 1992.

The extremely popular Hong Kong actress Maggie Cheung stars as “May Yip” Best remembered for playing Jackie Chan’s long-suffering girlfriend in the “Police Story” movies, she has also appeared to great acclaim in the films “The Iceman Cometh”, “As Tears Go By”, “Moon Warriors”, “New Dragon Gate Inn”, “In the Mood for Love”, “The Heroic Trio”, “Hero” and many, many more.

Mrs Jet Li, Nina Li Chi stars as “Hoodlum/Fu Fung Ling/Chimer”. Known as the “Marilyn of the East”, Li is a former Miss Asia winner. During a long film career she has appeared alongside Sammo Hung in “Pedicab Driver”, Jackie Chan in “Twin Dragons”, and of course with her husband Jet Li in “Dragon Fight”.

Orphans Yao Lung and May Yip live in Russia with their adoptive family. As the years pass, the two fall in love and promise that they will be together forever.

Producer Dean Shek has a cameo as Snooker

Full contact Beijing Opera on the streets of Hong Kong

Yuen Wah steps in as Master of Death

Yao witnesses a trained killer carrying out a hit, and is captured and brainwashed by a mysterious cult of assassins who call themselves “800 Dragons”. With the memory of his past erased, he is forced into a tough regime of martial arts training to become the perfect assassin for the 800 Dragons.

His former love May, spots Yao on one of his missions and recognises him. The code of the 800 Dragons is that anyone who sees an assassin during their mission must be eliminated. May brings back Yao’s memories of their past together, and he decides to follow his heart instead of the strict code of the cult.

With the full might of the 800 Dragons out to kill both of them, Yao must use all of his training to stay alive and save the love of his life.

The movie opens with a beautifully choreographed sword duel. The fighters move swiftly and rhythmically as if they are performing a bladed tango dance.

A fight between Anthony Mark Houn and Sam Wong Ming-Sing in the subway is mostly wire-free but still features plenty of flying about as they leap to superhuman heights. It’s filmed and paced very well with some great combinations of moves. I especially liked an overhead shot of a jumping spinning kick to back sweep.

Yuen Wah steps into play Master of Death and face off with Anthony Mark Houn on a train. Even in the confines of the railway carriages the fighting remains expansive, high kicking and acrobatic.

The middle section of the film is taken up by a series of bizarre training scenes, which hark back to the kung fu comedies of old. Mostly played for laughs, they include a Bruce Lee inspired nunchaku duel!

The film is based on the Crying Freeman Manga

Even without wires the jumps are superhuman 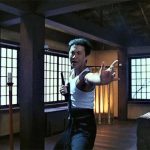 A night time attack on the master’s residence leads to an acrobatic duel with plenty of impressively high gymnastic tumbling over the swinging swords and kicks. A similar style of fighting takes place on the elevated footbridges of Hong Kong. It’s like watching full contact Beijing opera.

When Yao qualifies as the white mask-wearing “Free Man”, there are several short bursts of action between the exposition as he carries out various assassinations. Not just in it for the eye-candy, actress Nina Li gets to demonstrate her flexibility and impressive timing in a fight in a shower. After an explosive rescue from a military base, the film again harks back to the fighting finales of old school kung fu movies, as the Crying Freeman faces the Master of Death in a countryside setting. The choreography features some incredible acrobatics, some of it on wires and some, rather impressively, not.

This is a bizarre film. Based on a popular Manga comic book you would think the filmmakers could string together a decent narrative. Even the subtitles and the dubbing seem to be from two completely different scripts! The plot meanders from romance to a “La Femme Nikita” style assassin story, with strange interjections of comedy that mostly fall flat. As the lead, Sam Hui inexplicably keeps breaking into a Bruce Lee impression and never totally convinces as a cold and deadly trained killer. He does acquit himself quite well in most of his fighting scenes however.

Despite its shortcomings, this film does feature some Hong Kong action choreography out of the top drawer. A lot of the fight scenes feel “old school”, but in the Sammo Hung or Yuen Woo-ping of the late 1970’s sense, rather than the Shaw Brothers staccato shape-throwing of old. Although it occasionally features some fantasy elements, on the whole, it’s some of the most acrobatic and inventive fighting from the end of the eighties’ “Golden Era” and start of the nineties “New Wave”.

“Dragon From Russia” is best enjoyed for its many entertaining and well-shot fight scenes, and is worth a watch on a rainy day.

Not just in it for the eye candy

The movie opens with a beautifully choreographed sword duel

There are some old school style training montages

Some of the most acrobatic and inventive fighting of its day

Do you remember this title from 28 years ago? What was your fave action scene, should this get a reboot? Let us know your top fight-action films from the 90’s in the comments below. Help keep kung fu alive and kicking: hi-5 us with a LIKE and by sharing this with your friends and joining in the conversation on Facebook. You can also follow us on Twitter & Instagram. (Feed your Inner Dragon with our lively kick-flix and other exclusives!)