Shaw Brothers legend, Gordon Liu Chia Hui stars as “Hung Wen-ting”, a survivor of the destroyed Shaolin Temple. Liu’s breakthrough leading role was in “The 36th Chamber of Shaolin“. It led to many further memorable parts, often playing a shaven- headed kung fu master as either the hero or the villain. He appeared in two sequels to “36th Chamber”, as well as classics such as “Heroes of the East“, “8 Diagram Pole Fighter“, and “Legendary Weapons of China”. As the Shaw Brothers star dimmed somewhat, Liu remained active in smaller roles in films such as “Tiger on the Beat“, “Kill Bill“, “Dragon Squad“, “True Legend” and “The Man with the Iron Fists“.

A veteran of over 70 Shaw Brothers movies, Lo Lieh, who also directs, stars as the deadly “Priest White Lotus”, Pai Mei’s twin brother. Lo Lieh first hit the big time in the 1972 movie classic “King Boxer/Five Fingers of Death”. He went on to star in many Shaw Brothers hits including “Heroes of Shaolin”, “The 36th Chamber of Shaolin”, “Dirty Ho” and “Mad Monkey Kung Fu”. Later in his career he appeared in “Miracles”, “Dragons Forever” and “Police Story 3: Supercop”.

Action actress Kara Hui Ying Hung stars as “Mei Ha”. Kara Hui got her big break in 1976’s “Challenge of the Masters”, going on to appear in many Shaw Brothers classics including “Invincible Shaolin”, “Mad Monkey Kung Fu”, “Dirty Ho”, “Legendary Weapons of China” and “Return to the 36th Chamber”. Her defining role was as the lead in 1982’s “My Young Auntie” for which she won the Best Actress Award at the 1st Hong Kong Film Awards. Still active today, in recent years she has appeared in the martial arts horror movie “Rigor Mortis” and opposite Donnie Yen in “Dragon/Wuxia“.

Wu’s pregnant wife Mei Ha and Hung are the only remaining practitioners of Shaolin left to avenge their deaths. Initially, Hung’s hard-style kung fu skills are ineffective against White Lotus. In order to defeat the infamous white eye-browed master, Hung must learn to incorporate a softer, more feminine style, if he has any chance of a successful attempt at revenge.

Learning the art of Embroidery Fu

The kung fu fighting kicks off literally from the first frame as Hung and Wu take on the classic white-bearded opponent, Pai Mei.

As the key players are introduced we are treated to a beautiful jianshu performance from Yeung Ching-ching. Her authentic wushu skills are soon put into practice when the home of our heroes is attacked by dozens of White Lotus disciples.

Although there is some great choreography on display here, Yeung Ching-ching frequently strikes superfluous wushu poses. I can only guess that at the time, prior to the success of Jet Li‘s “Shaolin Temple” nearly two years later, the director wanted to show, what was then, something a little different to the traditional Shaw Brothers fighting styles.

The timing of some of the action in the fights throughout the film is truly astonishing. One of the leads can be fighting three or four opponents at once and yet duck or jump an attack from behind with inch-perfect timing, even though they can’t see it!

The training sequences purport to be the practice of Tiger Crane forms, but they tend to be played for laughs, or bias towards the flamboyant and outlandish, rather than strictly authentic kung fu techniques. Thankfully things are much more down to earth during the numerous fight scenes. 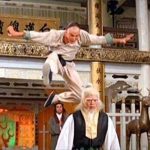 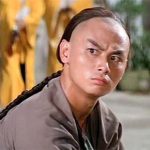 Priest White Lotus always has his guards nearby

There is an emphasis on hand, rather than leg, techniques throughout. Kara Hui also gets to demonstrate her exceptional grace and skill when she gives Gordon Liu a lesson in a softer style of fighting.

The highlights of the action are Gordon Liu’s three main encounters with Lo Lieh, although Hung does seem to focus a lot on grabbing the priest’s, ahem, “junk”. We see Liu’s skills grow from hard-style fist fighting, evolving to adopt a softer, more fluid style, before having to adapt and overcome by employing some embroidery-fu and acupuncture!

88 Films have delivered another beautifully packaged classic on Blu-ray. Although short on extras, you can watch the movie with a classic English language dub, or with the original Cantonese soundtrack and subtitles that you can actually read (fans of the old VHS copies will know what I am talking about)!

The high-definition picture is crisp and clean with bold colours, belying the age of the film. The double-sided sleeve features the classic original poster art, and a stunning up-to-date interpretation from artist Kung Fu Bob.

The plot is simple enough, as is the acting, humour and drama, but a movie like this is all about the kung fu fighting, of which there is plenty! This is undoubtedly another Shaw Brothers classic from the dream team that was action director Lau Kar-leung and Gordon Liu.

Which animal impression is this 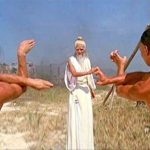 There are many many groin attacks in this film

Although it might not quite hit the high notes of films such as “The 36th Chamber of Shaolin” or “The Eight Diagram Pole Fighter”, fans of the Shaw Brothers style will lap this up! 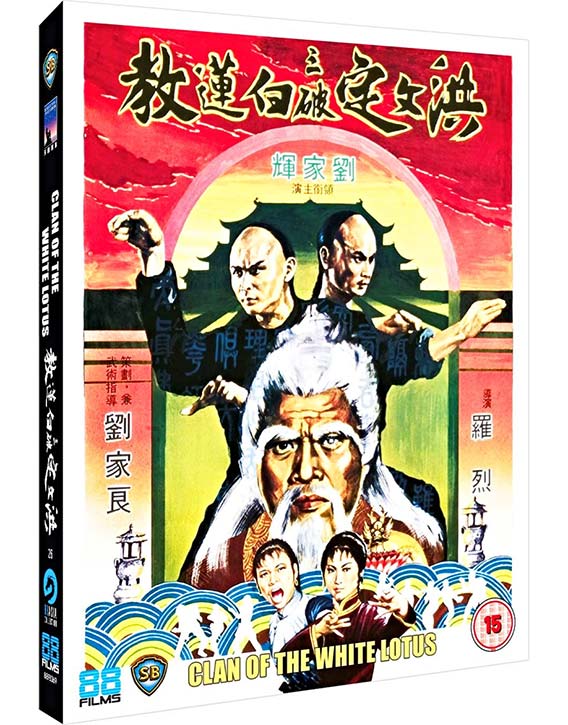 “Clan of the White Lotus” is OUT NOW courtesy of 88 Films and you can also order your copy from Amazon!

Order “Clan of the White Lotus” on gorgeous Blu-ray, now!

Does “Clan of the White Lotus” from some 40 years back…rank among your most memorable Shaw Brothers’ martial-arts classics? What’s your favourite Gordon Liu movie? Which other kung fu movies would you love to see get the 4K Blu-ray restoration treatment?

WHICHEVER CLAN YOU’RE FIGHTING FOR take a walk and recharge your chi through the FU-niversity of news, Top 5’s, Top 10’s, special interviews, get your best, old-school shapes on in KFK Official gear and subscribe for more classic fights on YouTube!