In 1966 the game-changing wuxia film “Come Drink With Me”, directed by King Hu, changed the Hong Kong film industry forever. Set during the Ming Dynasty, it stars Cheng Pei-pei as a skilled fighter and Yueh Hua as a carefree beggar, with Chan Hung-lieh as the villain. With action choreography from Han Ying-chieh, it is widely considered one of the best Hong Kong films ever made and is now available on stunning UK Blu-ray for the first time courtesy of 88 Films and can also be ordered via Amazon!

Chinese actress Cheng Pei-pei stars as “Golden Swallow”, a feisty and skilled sword fighter. It was the role that would shoot Cheng’s film career into the stratosphere. She revisited the character for the sequel “The Golden Swallow”, and went on to star to great acclaim in martial arts movies such as “Flirting Scholar”, “Flying Dagger”, “Brothers Five” and of course the Oscar-winning international box office hit, “Crouching Tiger, Hidden Dragon”.

Contracted by the famous Shaw Brothers Studios around the same time as Cheng Pei-pei, Yueh Hua co-stars as “Fan Da-pei/Drunken Cat”. His success in “Come Drink With Me” led to Yueh making an average of five films per year throughout the 1960’s and 1970’s. Along with appearing in Shaw Brothers classics such as “Monkey Goes West”, “Brothers Five”, “The Shadow Whip” and “The Water Margin”, in later years he would make guest appearances in Jackie Chan’s “Rumble in the Bronx” and Sammo Hung’s “Three Kingdoms: Resurrection of the Dragon”.

Having signed for Shaw Brothers in 1964, Chan Hung-Lieh, also known as Chen Hung-Lit and Golden Chan, was given the leading role of “Jade Faced Tiger”, the corrupt and sinister villain. As with his co-stars, it spring-boarded his career as a character actor, often in further villainous roles. Chan sadly passed away in 2009, aged just 66, after suffering a heart attack whilst working on the television series “Off Pedder”.

A gang of bandits kidnap the local Governor’s son to use as leverage to free one of their leaders. In response, the Governor sends his daughter, Golden Swallow, to rescue his son.

A local drunk beggar named Fan Da-Pei acts as Golden Swallow’s guardian angel, secretly helping her avoid being ambushed at night. Fan points Golden Swallow in the direction of the bandit’s hideout in a Buddhist monastery. In a confrontation with the hostage-takers, she is injured by a deadly, poisoned dart. Golden Swallow escapes and is rescued by Fan who nurses her back to health. While she’s convalescing, Golden Swallow learns that Fan is actually a martial arts master and a leader of a Kung Fu society, which he keeps secret.

Confronted and outnumbered by the bandit gang in a temple

The stillness is just as powerful as the action

There is a surprisingly violent opening to the movie, with lots of theatrical blood and rubber limbs being lopped off, when bandits attack an official caravan and troop escort.

Sent to rescue her brother, Cheng Pei-pei as Golden Swallow has a bold introduction in a traditional inn. Like the hero in a Western saloon, she is strong and skilled in both verbal negotiation and martial arts, as she takes on a group of tough talking male bandits. Some of the reverse filming techniques may look a little hokey by modern standards, but just like Clint Eastwood in a Sergio Leone movie, there is no denying Cheng Pei-pei’s presence, and the intensity of the scene.

The dance like fight scenes are captured in long fluid takes

Confronted and outnumbered by the bandit gang in a temple, the fight choreography is very (Peking) operatic in style. Although a little unsophisticated in it’s martial arts techniques, the dance-like fight scenes are captured in long, fluid takes. There is a musical rhythm to every movement, with beats of “block, attack, move, pause”. Even the way the camera moves and how the scenes are framed and edited, have a rhythm that make the stillness just as powerful as the action.

The movie’s largest scale set-piece features a band of formidable female fighters attacking the bandits in a mass countryside brawl. Cheng Pei-pei enters the fray initially dispatching all around her with a straight sword before reverting to her favoured double daggers. Although still very gracefully choreographed, the fighting is much more swift and urgent.

For the finale, the pole-wielding villain monk has a rather strange trick literally up his sleeve. He soon returns to more traditional weapons as he duels with the drunken Fan Da-pei. It (also literally) brings the house down!

The cinematography is visually striking with bold vibrant colours 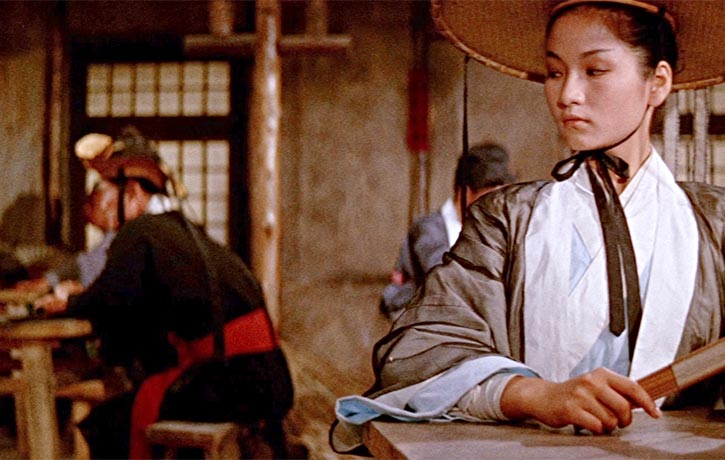 Golden Swallow has a bold introduction in a traditional inn

There is a surprisingly violent opening to the movie

Although aged just 20 years-old at the time, Cheng Pei-pei is superb as Golden Swallow. She carries the dramatic weight of the film with confidence and is equally skilled in the fight scenes. Her ballet training gives her a grace and precision that compliments the action perfectly. Chan Hung-Lieh as Jade Faced Tiger is an appropriately sinister and ruthless villain, and Yueh Hua is both charming and carefree as the drunken Fan Da-pei. It is easy to see why all three stars launched into successful film careers off the back of this movie.

The Blu-ray from 88 Films is excellent, featuring the original English Dub and original Mandarin soundtrack, with newly translated English subtitles. There is an interesting Audio Commentary by Genre Cinema expert Samm Deighan and some excellent artwork on the reversible sleeve. The picture restoration is flawless.

There is no denying Cheng Pei Peis screen presence 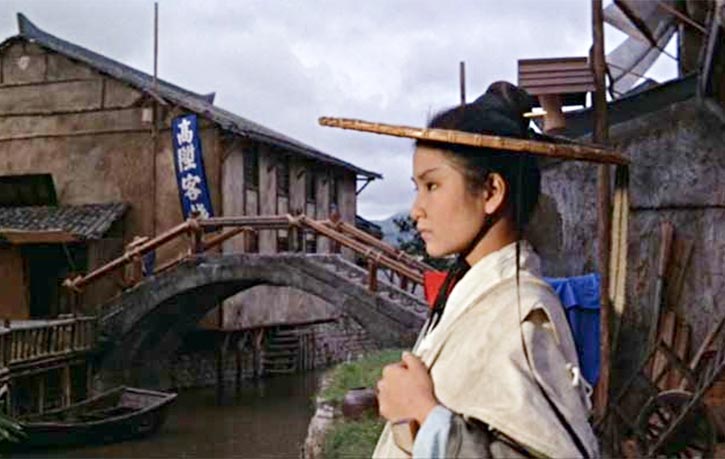 The Governor sends his daughter Golden Swallow to rescue his son

Even now for a film that is over 50 years-old, the cinematography is visually striking with bold, vibrant colours, unimpaired by the excessive colour grading of modern films. Every scene is exquisitely lit, framed with tight shots expanding out to reveal the full beauty of a location, or highlight the full movement of the graceful choreography. It might not be a fast-moving actionfest, but it is a work of art.

It’s easy to see why this film was a turning point for Chinese martial arts films. For fans of Chinese kung fu films, “Come Drink With Me” is an entertaining lesson and watershed moment in the wuxia genre, and as such, is essential viewing.

“Come Drink With Me” is now available to order on stunning UK Blu-ray courtesy of 88 Films, and can also be ordered via Amazon!

Does “Come Drink With Me” from some 53 years ago rank among your favourite Shaw Brothers wuxia-fu flicks? Which restored classic martial arts movies have you really enjoyed revisiting recently? Let us know in the comments below; Like, share and join in the conversation on Facebook and follow us on Twitter & Instagram!