Samurai, ninjas and assassins abound in this action-packed adaptation of the Japanese manga, Azumi. Directed by Ryuhei Kitamura (director of the cult classic “Versus”) this femme fatale assassin flick has enough sword action to keep the most diehard fans of the ‘chanbara’ (sword fighting) genre happy. The film is headlined by the highly bankable and popular Aya Ueto who takes the viewer on a thrilling emotional ride of death and destruction.

Japanese actress and songstress, Aya Ueto portrays the heroine of the film, Azumi. The villain Bijomaru Mogami, is skilfully portrayed by Joe Odagiri (from “Shinobi: Heart Under Blade”).

Yoshio Harada steps into the role of Azumi’s mentor and master, Gessai Obata. Assuming the roles of Azumi’s main target are Naoto Takenaka (Kiyomasa) and Kazuki Kitamura (Kanbei). Destined to be a fan favourite for his portrayal of Saru (the Monkey Ninja) is Minoru Matsumoto.

Rescued by a master assassin and swordsman, Azumi is raised with nine other orphans who are trained as young assassins to help eradicate ambitious warlords from a war-ravaged Japan.

The strength of the young assassin’s resolve is quickly tested when their master Gessai, asks them to pair up with their closest friend in the group. Mercilessly, Gessai orders them to slay their friend stating that “the weak minded one who cannot kill his friend cannot pursue his mission”.

This sets the tone for the movie, with success in their mission surpassing all other motives or conscious objections. The surviving five young assassins then set out with master Gessai and they leave their secluded life in the mountains behind forever.

Sword without a guard

After easily defeating several targets, the assassin team have an epic confrontation with a band of samurai and ninja and learn the hard way that a ninja’s weapon is often coated in poison. It is after this fight that the target of the assassination takes the grave step of having a psychotic killer, Bijomaru Mogami, released from a prison cell to track down and the kill the young group and Azumi. Setting the scene for the destruction to follow Bijomaru warns that if he is released from prison, the demise of many will prove a foregone conclusion.

After several of the young assassins meet their end by Bijomaru’s masterful sword, and Azumi’s master and friend are captured, a final showdown in a crazy bandit-ridden town sees Azumi enter this zone and unleash a feminine wave of death on a mass scale.

The final showdown is set as Azumi must take on the crazed Bijomaru whose samurai sword does not have a tsuba, (hand guard) as he never defends, he only attacks.

Fans of director Ryuhei Kitamura’s “Versus” will appreciate the sword play in Azumi. For a pop-star singer, with Azumi being her first major movie role, Aya Ueto’s portrayal of a master assassin and swordswoman is quite convincing, her performance in wielding the sword is mesmerising at times. Could Azumi defeat 200 opponents single handedly – probably not, but the action is convincing enough to be believable and more importantly enjoyable.

Azumi pondering life beyond the mountains

As with most movies where a single opponent slays a cast of warriors, the action is generally of the one-swing, one-death variety, however, director Ryuhei Kitamura makes the action flow seamlessly throughout the movie.

Whilst generally rare in Japanese samurai movies, there is a small element of ‘wire fu’ in the film, but it is kept to a minimum and its usage is appropriate to the story and the fight scenes. There is also the obligatory scene where Azumi slits an arrow down the middle with her sword as it is fired at her head but the scene is masterfully shot by director Kitamura. There are multiple cinematic effects used throughout the action sequences and Azumi’s flaming sword before the final showdown looks dazzling, again a credit to Ryuhei Kitamura’s directing talent and ability.

A relatively minor gripe is that one of my favourite pieces of action in the movie only lasted a few seconds. It saw Azumi slaying opponents with the enemies appearing to be moving in slow motion compared to her – this was surely an inspiration for similar scenes later portrayed in “Shinobi: Heart Under Blade”.

I only wish that this scene ran a bit longer, as the effects did look pretty impressive.

The action running through the movie is not only samurai-orientated. For example, one of the best fight scenes sees ninja versus ninja – the ‘good’ ninja and adviser Nagano has an epic fight with Saru (The Monkey Ninja), each testing their blades and skills intensively against each another.

The fight is enhanced by the strange, monkey-like noises that emanate from Saru as they battle it out. This is one of the more skilful fights in the film, though I may be a little bit biased in my enjoyment of the Monkey Ninja character!

As with most Japanese movies that portray a masterful swordsman, the hero will often slay enemies with ease, and “Azumi” is definitely no exception here. Whilst the swordplay and choreography may not be executed with quite the finesse of other popular Japanese chanbara flicks (think the Rurouni Kenshin series) the action scenes, which are nearly non-stop, will make this 2-hour flick breeze by in a whirl of clanging swords and glee.

Even though “Azumi” received mixed reviews from fans – it seems to be a love it or hate it affair, with not much middle ground, I personally really enjoyed it enough to watch the sequel and highly recommend this film.

Aya Ueto’s portrayal of a young girl struggling to understand her role as an assassin and whether there is a possibility for anything else in her life is great, but is almost surpassed by Joe Odagiri as Bijomaru whose portrayal of the psychotic killer is both entertaining and a little scary at times.

Adding characters such as Saru ‘The Monkey Ninja’ and the crazy bandits brings a bit of levity to the film, and I guarantee you’ll let out an expression or two when the Monkey Ninja gets blown sky high! 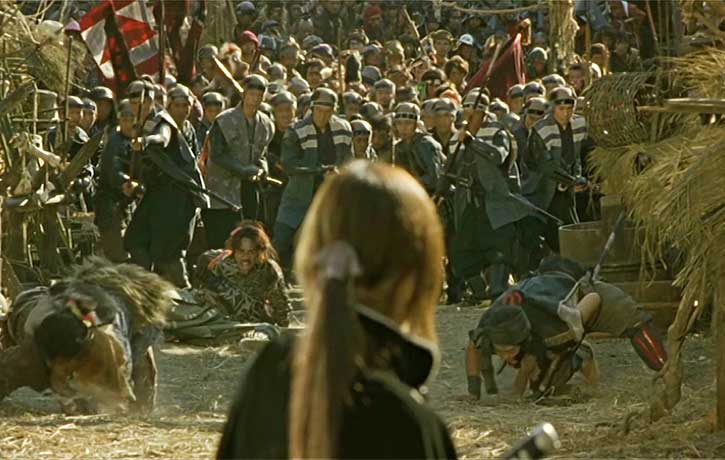 Do you remember “Azumi” from some 17 years ago…? What were the most memorable fight or action scenes for you? Which Japanese live-action titles rank among your most enjoyable adaptations? Let us know in the comments below; Like, share and join in the conversation on Facebook and follow us on Twitter & Instagram.

Get straight to the point in the FUniverse with these cutting-edge reviews, exclusive interviews, Top 5’s, Top 10’s, get KFK’d in the right gear, and subscribe for more clean-cut, slick action on YouTube!)

The Treasures of Bruce Lee