Part 2 of director Quentin Tarantino’s epic tale of vengeance ups the tension as The Bride finally slices and dices her way through the Deadly Vipers to kill Bill!

Uma Thurman returns as “The Bride/ Beatrix Kiddo/ Black Mamba”, a former member of the Deadly Viper Assassination Squad on a deadly quest for revenge.

Best known to martial arts fans for his roles in the “Kung Fu” television series and Yuen Woo Ping’s “True Legend”, David Carradine finally appears onscreen as “Bill/ Snake Charmer”. Bill is the leader of the Deadly Viper Assassination Squad, former lover of Beatrix and the father of her daughter. He is the final and eponymous target of Beatrix’s revenge.

The lioness and her cub 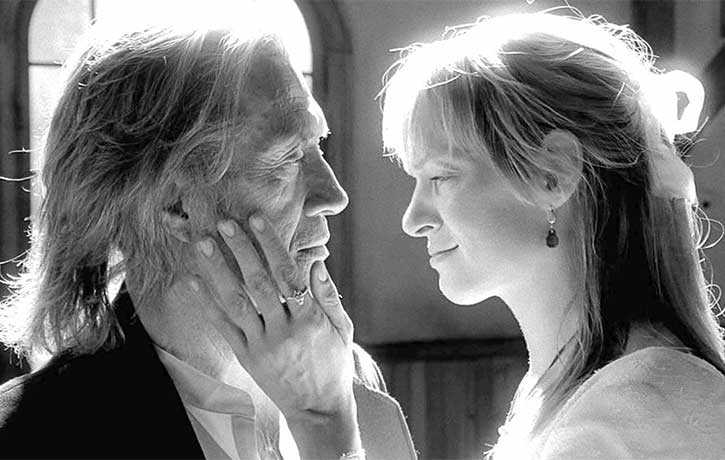 Bill sets the The Bride on a bloody path of revenge

Having appeared as “Johnny Mo” in Volume 1, Shaw Brothers legend, Gordon Liu Chia Hui guest stars here as “Pai Mei”, the white eye-browed martial arts master of the Five Point Palm Exploding Heart Technique. The part is tailor-made for Liu who is famous for his memorable roles in “The 36th Chamber of Shaolin”, “Heroes of the East”, “Challenge of the Masters”, and “Eight Diagram Pole Fighter”.

Four years before the events of Kill Bill: Volume 1, the pregnant Bride and her groom rehearse their wedding. Bill, the Bride’s former lover, the father of her child, and the leader of the Deadly Viper Assassination Squad, arrives unexpectedly and orders the Deadly Vipers to kill everyone at the wedding. Bill shoots the Bride in the head, but she survives and swears revenge.

David Carradine is nothing like his most famous role of Caine 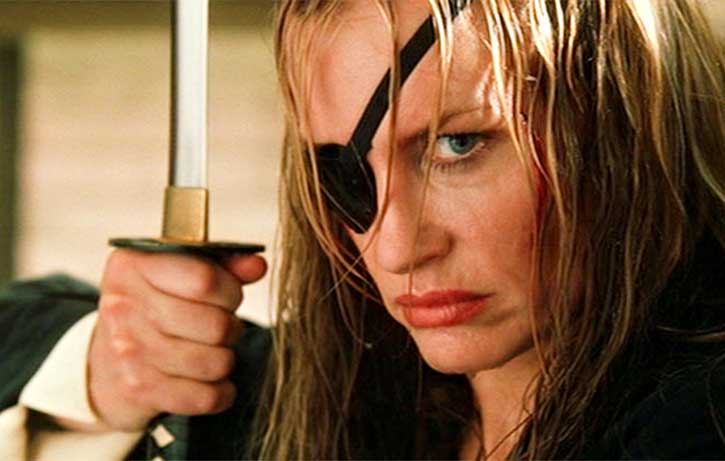 Elle Driver is driven by a point

In the present, the Bride has already assassinated two of the Deadly Vipers and seeks out Bill’s brother Budd, planning to ambush him. Budd however is expecting an attack and calls Elle Driver, another former Deadly Viper. Captured and left to die in a particularly gruesome and claustrophobic way, The Bride recalls her martial arts training many years before with kung fu master Pai Mei.

Having made her escape, The Bride finds her to way Mexico for a final confrontation with Bill, but the situation is more complicated than she could possibly imagine.

Volume 2 marks the onscreen appearance at last of Bill himself, David Carradine. He was of course the star of the hit 70’s TV show “Kung Fu”, a show that perhaps epitomised the martial arts craze at the time in the West, that these films reference so much.

The most obvious homage to 70’s kung fu films is the story of Pai Mei. It references classic Shaolin tales and features Gordon Liu as the White Lotus master Pai Mei. He is a thinly veiled caricature of the famous White Eyebrow master of Chinese folklore, Pak Mei.

Fans will spot references to kung fu films of old

Pai Mei is one of the only people alive who knows the ultra-secret Five-Point Palm-Exploding Heart Technique, a take on the Five Fingers of Death and King Kong palm of many classic kung fu films.

The training scenes with Uma Thurman could be straight out of an old Shaw Brothers movie, with scenes of carrying barrels of water up steep stone steps, and the harsh Master putting the student through gruelling exercises. Where Uma Thurman seemed adept with the Samurai sword in Volume 1, during the training sequences, she appears a little stiff when it comes to the fluid wushu movements of the Chinese-style weapons.

Gordon Liu, as you would expect, is very much at home as the harsh, beard- stroking kung fu master. Many elements rip off the training scenes from The 36th Chamber of Shaolin and “Snake and Crane arts of Shaolin”, but no more than the Kung Fu Panda films have done.

During her training Pai Mei teaches The Bride the art of the “three-inch punch” (obviously referencing Bruce Lee’s famous one-inch punch), which has its pay off in The Bride’s escape from a particularly claustrophobic fate!

Much like the opening fight with Vivica A. Fox in Volume 1, the fighting between Daryl Hannah’s Elle Driver and Uma Thurman’s Beatrix Kiddo is a vicious, hard-hitting battle that wrecks every breakable bit of crockery and furniture in Budd’s motorhome. As with the first movie, the lead actresses impressively perform much of the action themselves. Daryl Hannah even recreates a little of the action from her memorable role in the 1982 sci-fi classic “Blade Runner”.

The conclusion of the film sees David Carradine giving perhaps the best dramatic performance of his career. The Kung Fu star has a very brief opportunity to demonstrate some martial arts skills, but it is nothing like his most famous role of Caine! 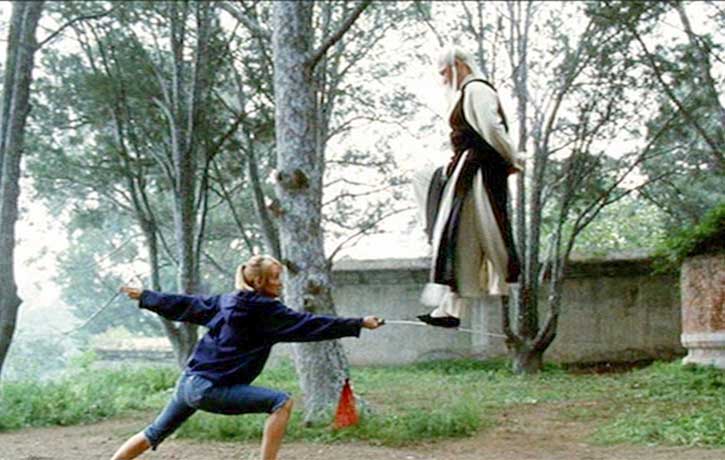 Stick around after the credits for a gruesome bonus behind-the-scenes outtake!

Volume 2 focuses much less on the action and is closer in tone to previous Tarantino movies, replete with long, wordy scenes full of colourful dialogue. Indeed, Tarantino himself has said he considers Volume 1 as a kung fu movie, and Volume 2 as a western. Whereas Volume 1 is an Asian movie trainspotter’s delight, Volume 2 will probably satisfy Quentin Tarantino purists a little more. 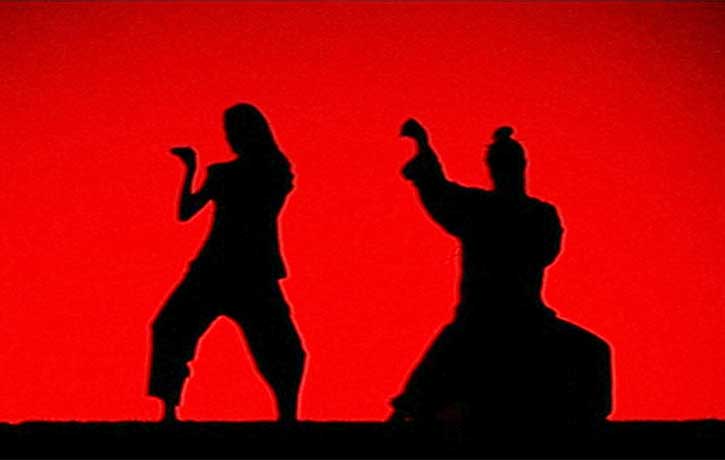 Trainspotter genre fans will have fun recognising the many film references

The pressure of old hate

Even so, this chapter in the saga still has plenty of references for genre fans, especially in the training scenes with Pai Mei. For action fans the highlight is the fight between Uma Thurman and Daryl Hannah. Elsewhere, the claustrophobic tension built in the “buried alive” sequence almost reaches Hitchcock-levels of suspense.

Although both movies are entertaining enough in their own way, they mark Tarantino as perhaps at his most self-indulgent as a writer and director. In movies such as this or even “Django Unchained” and “Reservoir Dogs” (which was heavily influenced by Chow Yun Fat’s “City on Fire”), he never seems to totally nail the Western cowboy genre or Hong Kong action genre. But then again, a “Quentin Tarantino movie” is almost an entire genre in itself, and maybe that’s the point.

Many genres are referenced including classic westerns like The Searchers

Youre just an amateur