Jackie Chan goes off the rails in this steam-powered action-comedy directed by Ding Sheng.

Best known for his role as the ruthless Japanese general in Donnie Yen’s “Ip Man“, Hiroyuki Ikeuchi plays a similar character here, “General Ken Yamaguchi”, but with a comic twist.

Jackie’s son Jaycee Chan stars as “Rui”, a maintenance worker and member of the Tigers. As he proved in the film “Invisible Target“, although he doesn’t share his famous father’s death-defying ability when it comes to stunts, he still impresses in the acting stakes and is very capable at holding his own in the action scenes.

Can Yamaguchi stop the rebel gang

Not a time to lose ones head

Asian pop star Huang Zitao, also known as Tao, stars as “Da Hai”, a tailor by trade, who is one of the Tigers. Popular Chinese television actor Wang Kai stars as “Fan Chuan”, with Taiwanese model and actor Darren Wang as “Da Guo”. Both actors will next be seen in Ding Sheng’s forthcoming “A Better Tomorrow 4”, a reboot of the John Woo/Chow Yun Fat heroic-bloodshed classic.

Up-and-coming action actress Zhang Lanxin, has made notable appearances in Jackie Chan’s “Chinese Zodiac” and “Police Story 2013: Lockdown”, and also in “Who Am I 2015”. Here she plays the tough Japanese soldier “Yuko Nakashima”.

Jackie fights it out on top of the train

Let off some steam

Set during the Second World War, by December 1941, Japan was expanding its occupation of territories throughout Southeast Asia. In China, the north-south railway route from Tianjin to Nanjing became of vital importance to the military and was heavily guarded by the Japanese army.

Relying on his wits and knowledge of the train network, railroad worker Ma Yuan leads a team of freedom fighters to disrupt the Japanese military’s activities. Known as “The Tigers”, they use the railway to ambush Japanese soldiers and steal supplies to feed the starving Chinese. When they encounter a fleeing soldier from the Chinese Eighth Army, the Tigers realise they are the only thing that stands between the Japanese reinforcements, and a crucial railway bridge that will transport them to the inevitable defeat of the Chinese resistance. With no weapons of their own, the ragtag band of guerrillas employ whatever tools are at hand and embark on their most dangerous and crucial mission yet.

Villain Hiroyuki Ikeuchi has a gift for comedy

Jackie nearly goes off the rails

The action is divided into four main set pieces; the opening “Rob the Train”, followed by an ambitious heist “Getting Explosives”, and the self-explanatory chapters “Great Escape” and “Blowing Up the Bridge”.

The opening train robbery sets the tone with a mix of real action and computer rendered steam locomotion. Much of it is light-hearted featuring moments of slapstick. There seems to be a never-ending stream of characters introduced throughout this sequence, and the chapters that follow, with their own anime-style freeze frame.

In contrast to the almost cheery introduction to our heroes, the Japanese villain of the piece, Yamaguchi, gives a brief but very serious demonstration of his highly effective and efficient Jiu Jitsu skills.

The second action episode features some nifty, although at times pretty brutal techniques, to stealthily take out the Japanese guards. It builds into a couple of amusing set pieces including Jackie becoming a human yo-yo on a rope and a fight on top of a moving train. The sequence includes a stunt with a motorcycle and sidecar landing on the roof of the moving train. In Police Story 3: Supercop 20-plus years ago, Jackie Chan’s stunt team launched the motorbike riding actress Michelle Yeoh onto a moving train for real. Here it looks very fake and a little silly.

The innovative “Great Escape”, also taking place on a moving train, is probably the closest the film comes to exploring Jackie Chan’s usual ingenuity. However, it is his co-stars that perform the majority of the action.

The Japanese army guard the railway

There were over 2400 VFX shots

The second half of the film is taken up by the film’s fourth and final act, “Blowing up the Bridge”. It features large scale set pieces involving trains, tanks, intense shootouts, and a multitude of digital explosions. The action is virtually non-stop, but fans looking for classic Jackie Chan fights and stunts, will be left mostly wanting, aside from one or two very brief instances.

The end credits do feature some bloopers, but they are generally Jackie fluffing his lines rather than any of the usual painful mishaps, a sign perhaps of the lack of his usual stunts in this production.

Jackie’s latest collaboration with Ding Sheng is an amusing enough affair featuring some gentle and simple comedy that is laced throughout with some pitch-black humour. They even have a comic scene involving a Japanese suicide ritual! 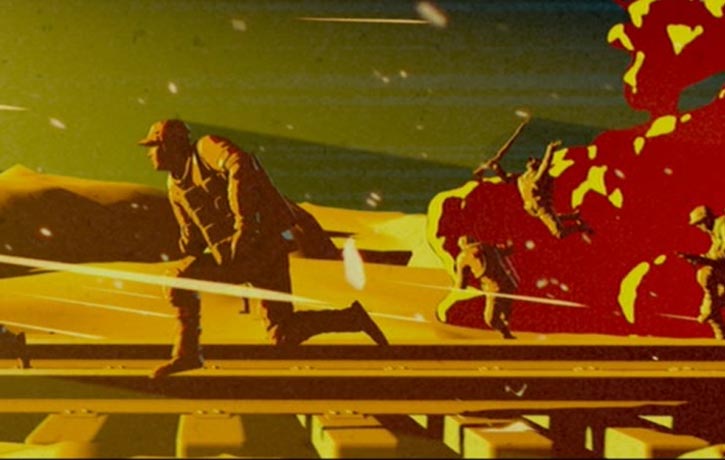 There are Japanese anime style inserts throughout

The conclusion features some intense shootouts

Only Jackie Chan would board a train like this

A human yo yo

The story takes place in December 1941

Surprisingly Ip Man villain Hiroyuki Ikeuchi, once again playing a ruthless Japanese General, demonstrates he has quite a gift for comedy. In fact, he probably has some of the funniest moments in the film. For action fans, Jackie Chan’s contribution is largely inconsequential. His acting performance is very good as the humble, Robin Hood-like leader of the Tigers, but there is very little here to compare to Jackie’s usual brilliant comic-timing or physical performances. He does have a very funny and self-referencing scene with his real-life son Jaycee though, as they argue who is the best looking.

The first hour and a half of the movie spends a long time establishing the camaraderie among the Tigers in between the chapters of action. However, with so many introductions flashing up so frequently, they never really become fully defined characters that you can actually care about. The concluding forty minutes are taken up by one long battle on a moving train, which is just about exciting enough to hold the viewer’s interest to carry them through to the predictable finale on the bridge.

There are some Japanese anime-style inserts throughout, plenty of Steadicam cinematography, and a LOT of green screen and computer effects. Some of the effects-enhanced scenes are impressive, but many are let down by explosions that look like they were done on a mobile phone app.

I have enjoyed Jackie Chan’s and Ding Sheng’s previous work together, but disappointingly “Railroad Tigers” is nowhere near as successful. If you are looking for a mildly-amusing Chinese film with the occasional thrilling shootout, that happens to feature a fine-acting Jackie Chan and son, do check this one out, but don’t expect the usual high level of stunts and comedy.

Much of the action is performed by the supporting cast

Ritual suicide is no joke or is it

The bridge has become crucial to the Japanese army